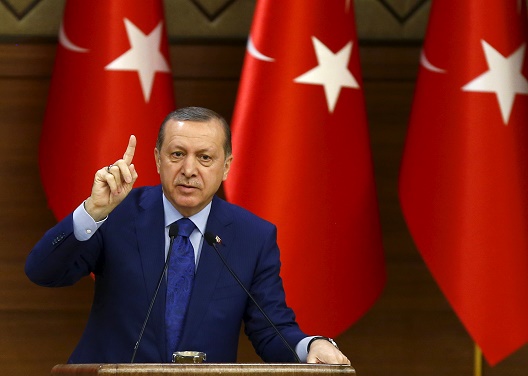 On March 13, two suicide bombers detonated a car bomb at a major transit hub in Ankara’s Kızılay neighborhood, killing 37 and injuring more than 100 civilians. This latest attack has upended Turkish politics, prompting Turkish President Recep Tayyıp Erdoğan to call for the imposition of strong anti-terror laws intended to punish those that support terror, including non-governmental agencies and journalists presumably sympathetic to the Kurdistan Workers’ Party (PKK). These developments come amid the ruling Justice and Development Party’s (AKP) campaign to change Turkey’s constitution. Developments on the nationalist right and Kurdish left of Turkish politics will have a significant impact on the future of Turkey’s political system.

President Erdoğan has pushed for the creation of an executive presidential system, albeit operating in a unitary state, with a unicameral legislature. In a recent interview with Daily Sabah’s Ali Ünal, Mustafa Şentop (the AKP parliamentarian in charge of the negotiating the new constitution with MPs) ruled out the imposition of a federal system. He argued, “A unitary structure is a must for Turkey.” This proposed structure has raised concerns about the separation of powers in a post-parliamentary Turkish political system.

The AKP is currently conditioning the electorate to support the presidential system, based on the expectation that the party will be able to pass a draft document out of the parliament and then on to a national referendum. To do this, the AKP needs its 317 members to vote in favor the document, along with an additional 14 MPs from one of the three main opposition parties: The Kemalist Republican People’s Party (CHP), the far right Nationalist Movement Party (MHP), or the Kurdish majority Democratic Peoples’ Party (HDP). All three have signaled support for changing elements of the constitution, but not the AKP proposal for a presidential system.

In expectation of a parliamentary deadlock on this issue, the AKP indicated that it would pursue negotiations with the opposition parties in the short term, but eventually show their own draft version of the constitution to the electorate. This is part of a broader effort to pressure rival MPs to vote in favor of the draft, once submitted for approval by secret ballot. The AKP’s rhetoric towards the HDP and internal discord within the MHP could benefit the efforts to win parliamentary support for the constitution.

The AKP, with MHP support, favors the prosecution of HDP co-chairs Selahattin Demirtaş and Figen Yüksekdağ, along with MPs Selma Irmak, Sırrı Süreyya Önder, and Ertuğrul Kürkçü for their support of “autonomous governance,” a political vision of the Kurdistan Workers’ Party (PKK) in Turkey and Syria. The issue gained more salience after HDP MP Tuba Hezer, was photographed attending the mourning ceremony for Abdülbaki Sömer, the suicide bomber responsible for the February attack in Ankara that killed 29 people. In early March, Turkey’s Justice Ministry submitted a request to the parliament to lift HDP members’ immunity—a request Erdoğan has also endorsed. Indeed, since the March 13 Ankara bombing, calls to strip HDP MP immunity have increased. In a recent editorial the pro-government Daily Sabah, the paper argued, “the HDP leadership is directly responsible for the bloodshed that took place in Ankara …”

At the same time, the long-standing MHP leader Devlet Bahçeli faces a strong interparty push to remove him from his leadership position. Backed by a majority within the party, MP Meral Akşener has gained enough momentum to force a vote that could force Bahçeli from power. This interparty discord began after the inconclusive June election, when the AKP won just 40.9 percent of the vote, equating to 258 parliamentary seats. During the subsequent talks to form a governing coalition, Bahçeli steadfastly refused to compromise with the AKP.

This prompted Tuğrul Turkeş, son of MHP’s founder and symbol Alparslan Turkeş, to resign and join the AKP. Thereafter, Tuğrul ran in a “safe” AKP district in the November election, was easily elected, and has subsequently been appointed as one of four Deputy Prime Ministers. The MHP also saw its popularity drop during this period, losing 39 seats (from 80) in parliament between June and November 2015.

The MHP is now divided, with a large minority continuing to support Bahçeli. In a revealing interview, the MHP’s youth group leader Ülkü Ocakları (known as the Grey Wolves) signaled his support for the current leadership. The group is accused of acting as a quasi-militia, linked to the killing of Kurdish activists and members of the PKK in the 1990s and recent acts of violence targeting HDP offices in Istanbul.

Akşener reportedly represents the “new MHP,” although she appears to have the backing of hardline elements within the party—all of whom have negative views of the HDP and the AKP’s previous efforts to negotiate with the PKK’s imprisoned leader, Abdullah Öcalan. She was also a member of the True Path Party (DYP) in former Prime Minister Tansu Çiller’s coalition government in 1990s. During this period in Turkish history, groups linked to the MHP and the militia (sometimes dubbed the Turkish “Deep State”) carried out some of the worst human rights abuses in Turkey’s Kurdish majority southeast.

For now, Akşener’s insurgent candidacy has forced Bahçeli to drop his previous refusal to negotiate with the AKP over the constitution in parliament, but the MHP refuses to support the transition to a presidential system. Bahçeli also forced the closure of several MHP district offices, ostensibly because they supported the moves to unseat him from power. He has also attacked Akşener’s for having reportedly close ties with the Gülen movement—a claim she denies—and for being too pro-Western

Her reputation as a technocrat (she has a PhD in the social sciences) has inspired optimism that she may spearhead a revival of the party—and position the party is a key interlocutor with the AKP, perhaps with the intention of establishing the MHP as a party that can actually govern, rather than just continue as an opposition party. She has managed to force the issue, with a Turkish court expected to hear a case before April 8 about forcing the MHP to hold an extraordinary party. Indeed, some younger MHP members are threatening to go on hunger strike in front of the party offices to ensure that the party schedules a congress to decide Bahçeli’s fate.

The potential legal case against the HDP and the possible split of the MHP provides the AKP with ample opportunity to cultivate relationships with insurgent members of either parties’ caucus to support the push for the presidential system. It also removes the threat of the AKP being outflanked on the nationalist right, an area of potential vulnerability for the dominant AKP as seen in the 2014 mayoral election in Ankara.

The concurrent collapse of the AKP-led peace talks with Abdullah Öcalan suggest that the party could look to the MHP for votes in the coming months. However, one cannot rule out a quiet push to use Kurdish members of the AKP’s caucus to appeal to members of the HDP, dissatisfied with the actions of the PKK’s urban youth group (the YPS) in urban centers in Kurdish majority cities in Turkey’s southeast.

This will not be easy, but the AKP appears to be operating on a timeline wherein it hopes to force a vote on the issue by June 2016. Certainly, the AKP could alter this timeline in the coming months, but this timeframe coincides with the end the parliamentary calendar and the reported AKP demand of the European Union to remove visa restrictions as part of the recently negotiated refugee arrangement.

The AKP is now positioning itself to force a vote on the constitution in the near term, perhaps with the expectation that a public referendum could be scheduled in early 2017. The collapse of the MHP and the legal cases against the HDP aid in this process, providing a number of options for Turkey’s governing party as it pushes to realize its top legislative priority. The recent violence exacerbates these trends and may hasten legal action against the HDP, before the MHP decides its own fate with its internal problems.

Image: Turkish President Tayyip Erdogan makes a speech during his meeting with mukhtars at the Presidential Palace in Ankara, Turkey, March 16, 2016. (Reuters)