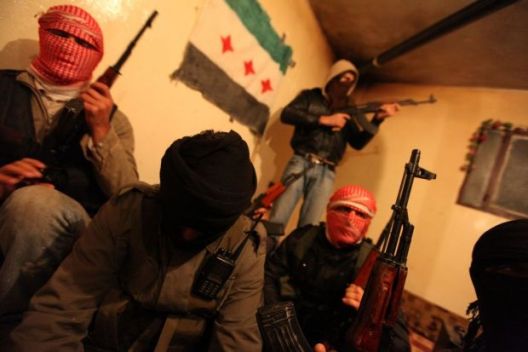 Things have not been going well for Syrians opposed to the Assad regime, especially those who favor a united, constitutional, non-sectarian Syria. No news here: this has been the case since 1970, and particularly since March 2011. The United States recently delivered a piece of bad news was to the head of the Syrian National Coalition: you may have created an interim government and named a prime minister, but no way will the United States recognize it; the Syrian government we recognize is the one in which Bashar al-Assad serves as president.

As explained to reporters in a background briefing, the new interim government has a fatal defect: its inability to meet Syria’s international legal obligations. According to an unnamed senior US official, the interim government “couldn’t enforce International Civil Aviation Organization (ICAO) regulations—overflight of Syria—or maritime treaty obligations, things like that.” When asked how the United States was able to overcome this obstacle in the case of Libya, the senior official replied that he did not know; he or she had not worked on Libya.

Let us stipulate something that outside observers often overlook in the world of nonstop crisis diplomacy: people doing the actual work get bone tired and sometimes say things that do not come out right. Regrettably, the United States continues to recognize as a government a regime neck-deep into war crimes and crimes against humanity; an entity that is no more than an implementing arm of a particularly nasty family business, one fully engaged in daily massacres now accomplished—because of all the recent fuss—without chemical weapons. Yet this situation is not explained by the inability of the opposition’s interim government to enforce ICAO regulations. It is certainly not explained by the regime’s dedication to meeting its legal obligations. The Assad regime is, after all, a case study in political criminality.

Were do-overs permitted in foreign policy, a functioning alternate government would now control and operate on liberated Syrian territory. A well-armed, equipped, and trained army would now defend it—one shaped in large measure by a July 2012 decision of President Barack Obama to stop subcontracting the arming of the Syrian opposition to others. The Friends of Syria Group would by now recognize, accord financial assistance to, and enjoy defense relationships with a government dedicated to reconstruction, reform, reconciliation, rule of law, and a non-sectarian Syria of citizenship. As such it would provide, at long last, the living, breathing alternative to the Assad regime: an entity that could go to Geneva as the regime’s equal, to negotiate a government of national unity that could slide the Assad-Makhluf clan offstage while making consent of the governed—all of the governed—the linchpin of Syrian political legitimacy. This is where we could have been. This is where we should be. This is where we are not.

Instead, the world endures the mother of all unintended consequences. Syria’s coalition of co-dependency—the Assad regime and the jihadists purporting to oppose it—managed thoroughly to marginalize a truly Syrian alternative to clan rule. They have had help. Many of those in exile who claim mantles of leadership have been in no hurry to abandon Istanbul for Syria itself. Indeed many of them, as they dedicate their lives to the meaningless political maneuvering of exile politics, will not even deign to get as close to Syria as Gaziantep. Some of those to whom the arming and equipping function has been subcontracted have, at times, specified that their assistance go to fighters with crude, sectarian agendas. In this regard private Gulf donors—the true vanguard of the jahaliyya in the Muslim World—have generously funded the Syrian activities of a pack of criminals whose very existence is a boon to the Assad regime. Then there is the United States: ambivalent, skeptical, self-doubting, and uncertain; wishing and hoping that the wolves devouring Syria and those feeding them will only realize the futility of armed struggle, the necessity of a political track, the end of the Cold War, and the pertinence of a chemical weapons framework agreement which, if fully and faithfully implemented, will snip off only the tip of Syria’s deadly iceberg.

There are indeed weighty, if not sound, reasons why the United States shies away from encouraging Syrian moderates and constitutionalists to establish a government in liberated Syria, to recognize it, to organize support for it, and to help defend it. These reasons have nothing to do with lawyers’ arguments about an entity’s ability to regulate air traffic or issue postage stamps.

Leave aside the fact that the arms-length approach of the United States to the crisis in Syria facilitates a situation where the Assad-jihadist coalition of co-dependency would simultaneously and jointly pounce on a government established inside Syria right now. That could eventually change if the United States proves willing and able to arm, equip, and train Syrians willing and able to support and defend a government for all Syrians, and if the United States can persuade others to vector their assistance in the same direction while making a good faith effort to dry up private cash for criminals.

The central fact, however, is simply this: the United States will not commit itself to the formation of a serious alternative to the Assad regime. That alternative can only be inside Syria. Yet it would require help staying alive, and this is a bridge too far for the Obama administration. The December 2012 recognition of the Syrian National Coalition as the legitimate representative of the Syrian people proved, over time, to be the emptiest of gestures: grist for an announcement justifying a Friends of the Syrian People meeting in Marrakech. President Obama, in an interview at the time of the announcement, even specified that the United States recognized the coalition as the legitimate representative of the Syrian opposition. Yet the natural next step—deploying a team to work with the London 11 core group to lay the groundwork for a government on Syrian soil that could unite local committees against the regime and its jihadist co-dependents—never took place.

In fact, the latest Dutch Uncle advice to the Syrian National Coalition about the legal checklist its interim government should complete before attaining the exalted governmental status of the Assad regime is the least of the coalition’s problems right now. The US attitude is at least a known quantity. The declaration of thirteen armed opposition entities rejecting the coalition and upholding their own abominable versions of sharia could very well be the last nail in the coffin for the idea of an alternate government inside Syria. General Salim Idris will do his best to undo the damage, but he will have an uphill battle. The specter of a Geneva peace conference, for which Coalition President Jarba has pledged his support, adds an additional layer of complexity. If the coalition is not already dead by the time such a conference takes place, its attendance—unless the Assad terror campaign of artillery shelling and aerial bombing against Syrians in their homes stops—could kill its tenuous credibility. If the United States does not wish to assist in this suicide, it will insist, as a condition for the conference itself taking place, that the murder stop and that the Assad regime implement de-escalatory and humanitarian steps similar to those recommended by Kofi Annan before, during, and after Geneva 1.

Facilitating a credible, civilized alternative to the Assad regime is immeasurably harder now than it should have been. The Obama administration can either freeze in the face of Syria’s deepening chaos by concentrating on chemicals alone, or work with its partners to create the alternative Syrians so badly need. Nothing in this endeavor would contradict Geneva. Indeed it, along with stopping the regime’s daily slaughter of innocents, would make it possible.