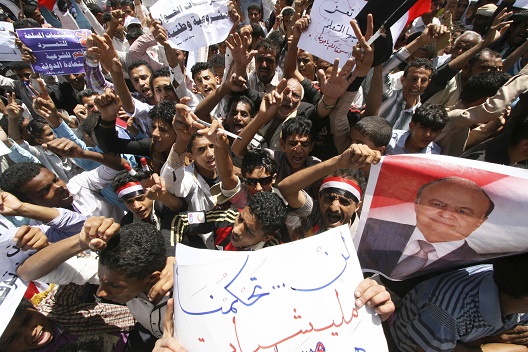 In case there were still any doubts about Iran’s growing influence in Yemen, Tehran put that issue to rest with a hostage rescue operation last week, a pledge to provide the Houthis with a year’s worth of oil and electricity, and newly established daily commercial flights between Tehran and Sana’a. The twin initiatives demonstrate that Iran now has the political, security, and commercial infrastructure in Yemen made possible by the Houthi takeover of the capital. By contrast, the US and European capitals have now moved their embassies out of Sana’a, with some reestablishing presence in the southern capital of Aden and others (the United States) in nearby Jeddah, to continue a dialogue with President Abdrabbo Mansour Hadi. Since his escape from house arrest under the Houthis, Hadi has reasserted his role as president from the new location in the south. The climb back up from Aden to Sana’a to reunify the country will be difficult, but not impossible, for all concerned. The question is: What leverage should the United States use to get the Houthis to cooperate?

For the Untied States, clinging to the cliché of “we still believe in the efficacy of the national dialogue and the legitimacy of the presidency of Abdrabbo Mansour Hadi” will no longer suffice. UN Envoy Jamal Benomar’s mission in Yemen has effectively ended, even though he clings to his role as mediator, valiantly shuttling between the various warring and bickering parties. The reason for the futility of this mediation at this point is as old as international diplomacy: It is called leverage. Sadly, he, along with the western powers that continue verbally to support his mission, currently have none.

The Houthis have taken over the northern half of the country, minus the eastern province of Jawf, and the Hadramawt region, which runs along parts of the Saudi and Omani borders. South of Sana’a, the Houthis struggle to subdue the tribes of Ma’rib, the people of Ta’iz, and the greater Aden area along the Indian Ocean. In geopolitical terms, this incomplete takeover of Yemen should put the Houthis at a serious disadvantage. As things stand, it does not, primarily because the Houthi’s Yemeni opponents have not united behind a single leadership, nor have their regional and international opponents put together a strategy to take advantage of this vulnerability.

President Hadi should be encouraged to set up a core group of leaders and activists to facilitate building a strong coalition to unite the regions where the Houthis remain weak. The ancient city of Ta’iz, Yemen’s third most populated urban center and strategically poised between north and south Yemen, has been rife with anger, resentment, and defiance to the Houthi takeover. Their almost daily demonstrations, however, do not amount to much unless that anger is channeled under new leadership. Rashad al-Alimi and General Mahmoud Subaihi are two such leaders capable of unifying and organizing the population of Ta’iz. Dr. Alimi, with a Ph.D in sociology and longtime minister of interior under ex-President Saleh, was most recently security advisor for the transitional government. He is from Ta’iz, but is widely respected for his honesty and integrity across the country. For the US Embassy, at least when Ambassador Thomas Krajeski and I were stationed there (2004–2007), Dr. Alimi was always a friend and a trustworthy interlocutor. On security and military matters, he is a professional who understands the Yemeni terrain better than most anyone in the country. General Mahmoud Subaihi, also from Ta’iz, was until last week the minister of defense. Trusted by southerners for his forthrightness, military skills, and leadership, he defected from Sana’a last week to join president Hadi in Aden. He and Rashad al-Alimi could together organize the city of Ta’iz and ensure a solid front for the opposition along the western coast of Yemen.

The southern Hirak movement, based in Aden, has also been seething with rebellion against the north prior to the 2011 uprising. Courted by the Houthis since their takeover of Sana’a, they have responded only with distrust, derision, and refusal to play along with what they have termed a military coup against the legitimate authority of a southerner, president Hadi. The Hirak, however, has been plagued with division and lack of solid leadership. At its core, Hirak has remained largely a popular movement, led by minor populist figures who have struggled with one another more than they have with Sana’a.

Mohamed Ali Ahmed, Abderrahman al-Jafry and Ali Salem al-Beid, all leaders of note in the south, have led separate factions of the popular movement and have insisted for the past three years on separation from the north, rather than on an agenda for reform that would keep the country together while giving more autonomy to the south. Of the three, Al-Bied, formerly president of South Yemen and a vice president under the first unity government in Yemen in 1990, is the least trustworthy and has received funds from Iran since 2011, if not longer. The Hirak faction that supports him recently retook his old residence from the al-Ahmar family in a move that appears to prelude an attempted return to Aden, perhaps supported by the Houthis, who hope to use him for their own leverage in the south.

In terms of old leadership, a better bet for Hadi and the West would be Ali Nasser Muhammad, another former president and prime minister of South Yemen, living in exile since 1990, but still active in Yemeni politics out of Cairo and the United Arab Emirates. To his credit, Ali Nasser still believes in a unified Yemen and enjoys broader respectability among southerners as a more independent leader, capable of talking to Yemeni communities across the board—including possibly negotiating with the Houthis.

In Ma’rib, head sheikhs of the Obaida and Murad tribes have thus far proven themselves worthy defenders of their governorate against both the Houthis and al-Qaeda in the Arabian Penninsula. The confrontation between them and the Houthis was the immediate cause for the Houthi move against Hadi last month, as the president refused to mobilize his military to facilitate the Houthi takeover of Ma’rib. A union now, between Ma’rib tribes and Hadi would make pragmatic political sense.

A coalition among the regions, possibly under the leadership of individuals mentioned above, could reassert the Yemeni government’s legitimacy before the Houthis make their own deals to secure alliances in the south. Such a coalition would at least help level the field in negotiations with the Houthis and—with regional and international backing—form a unified front with actual military options should negotiations hit a brick wall. The Houthis have thus far had little reason to compromise with their opponents. A unified coalition in the areas mentioned would seriously limit their access to the southern and western coasts, leaving them feeling hemmed in and vulnerable. Iran, whose appetite has been whetted by the Houthi takeover, must also be made to feel that a strong coalition with regional and international support would make it costly to support the Houthis through a potentially prolonged violent conflict.

Image: Anti-Houthi protesters shout slogans during a demonstration to show support to Yemen's President Abdrabbo Mansour Hadi in the southwestern city of Taiz March 4, 2015. The sign (front) reads: "We will not be ruled by a militia." (Photo: Reuters/Anees Mahyoub)