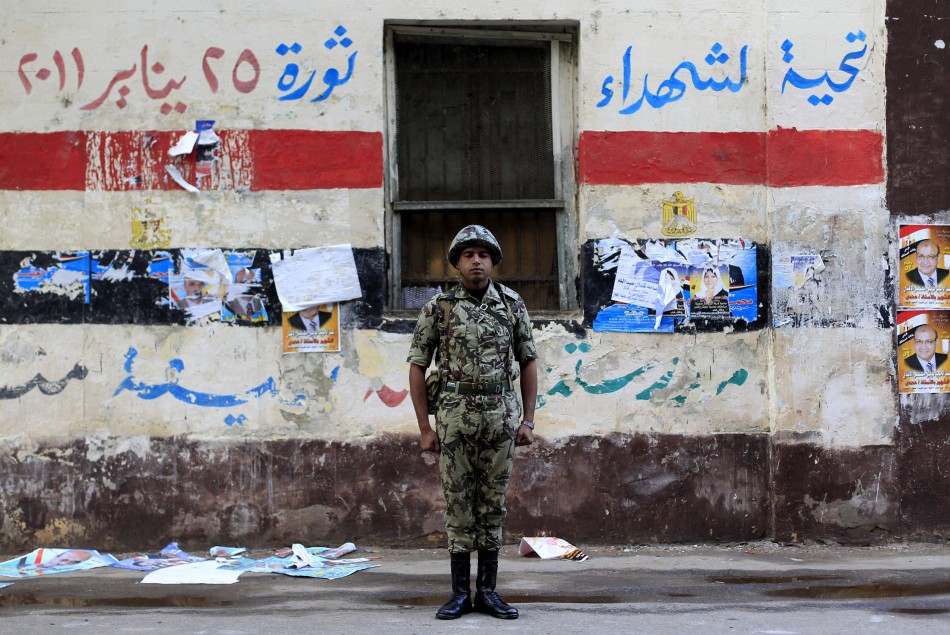 US senators subtracted $5 million from aid provided to Egypt on Wednesday, to reimburse the US Treasury for money it paid to bail out American pro-democracy activists facing charges there earlier this year.

The elections’ first polling day witnessed almost no reported violence and only a few violations, with the most brazen being by presidential front runner Ahmed Shafiq who held an illegal press conference at his lush villa headquarters in Dokki. Mohamed Mursi and Abdel-Moneim Abul-Fotouh also overstepped the mark by giving interviews ignoring the ban on eleventh-hour campaigning. Other violations included vote buying in Tanta; limited scuffles outside various polling stations; names missing from Nasr City voter lists; and reported bullying in Suez. Although confirmed figures are unknown, analysts predict around 30-40 million citizens (60 -75 per cent of eligible voters) made it to their polling stations. The surprise of the day was the voters’ support of Mubarak’s final prime minister Shafiq, a controversial figure who was ousted in February 2011 following popular protests.

First day of voting not without glitches

Until late afternoon, many observers sensed a smaller turnout compared to last year’s legislative elections, in which about 54 percent of Egypt’s registered voters went to the polls. Yet, as soon as the sun set and the heat waned, the turnout increased significantly. The influx of voters prompted the Presidential Elections Commission to extend voting hours until 9 pm from 7 pm. Several candidates violated the campaign blackout in many provinces. Abouel Fotouh campaigners erected a booth bearing the candidate’s photo outside a polling station in the Alexandria area of Ezbet al-Mattar, while Morsy campaigners bussed voters in and drove them to their respective polling centers in the Mediterranean city. They also gave fast food meals out to voters. In Suez, Morsy’s and Sabbahi’s backers rallied to persuade voters to vote for their respective candidate before they cast their ballots. In the Delta province of Kafr al-Sheikh, Moussa campaigners had reportedly given out LE150 and a meal to voters in return for their votes. In response to violations, seven supporters of Morsy, Shafiq and Abouel Fotouh were arrested for violating the campaign ban. The vote counting is set to kick off on Thursday evening as soon as voting hours end.

Asking officials from different presidential campaigns on where their respective candidates stood in relation to their electoral rivals on the first day of Egypt’s presidential elections, estimates varied considerably. Mohamed Osman, a campaigner for Abul-Fotouh, agreed with the Brotherhood’s assessment, telling Ahram Online that Mursi represented Abul-Fotouh’s primary rival. While Mubarak-era prime minister Ahmed Shafiq has also reportedly won a high number votes, Osman believes the runoffs will ultimately pit his candidate against Mursi. Contrary to the Brotherhood’s estimates, Osman believes voter turnout on Wednesday was low, while "numerous violations were reported." He went on to complain that certain candidates "had transported supporters to polling stations to cast their ballots." Shafiq campaigners, meanwhile, refused to reveal their assessment of who the main competitors were and where they stood in relation to one another. Moussa campaigners, for their part, however, said that their candidate had probably come in second after the Brotherhood’s Mursi. Campaigners for Sabbahi, who according to many observers did much better than predicted, asserted that their candidate "came in first in many Egyptian governorates."

The April 6 Youth Movement said Wednesday that the military police has detained three of its members in Port Said after they videotaped electoral violations in polling stations in the governorate. Military police allegedly arrested Abul Fadl outside the polling station at Yarmouk School, while Mohsen was reportedly arrested after he videotaped army forces attacking a girl outside the same polling station. Hashem was detained after he allegedly witnessed campaigning for the Muslim Brotherhood’s candidate Mohamed Morsy in a polling station in Port Fouad. In other news, the Egyptian Association for Supporting Democratic Development has claimed that the failure of the Presidential Elections Commission to control campaigning has led to clashes between their supporters, which foreshadows more violence in the coming hours, given the many complaints it received. Association observers monitored several altercations between supporters in Cairo, North Sinai and Alexandria.

Egypt will offer 4.5 billion Egyptian pounds ($745 million) of treasury bills today as yields rose ahead of the second day of voting in the country’s presidential election. The mid-yield on one-year notes in the secondary market rose six basis points, or 0.06 of a percentage point, to 15.76 percent yesterday, according to data compiled by Bloomberg. That’s the highest level in almost two months. The debt sale is part of a Finance Ministry plan to raise 150 billion pounds this quarter, the last of the country’s fiscal year. The ministry has fallen about 6 percent short of its 102 billion-target so far, according to data compiled by Bloomberg.

US senators subtracted $5 million from aid provided to Egypt on Wednesday, to reimburse the US Treasury for money it paid to bail out American pro-democracy activists facing charges there earlier this year. "I’ll be darned if I am going to give them (the Egyptian government) that money," Leahy said. The total value of US aid to Egypt is around $1.7 billion per year.