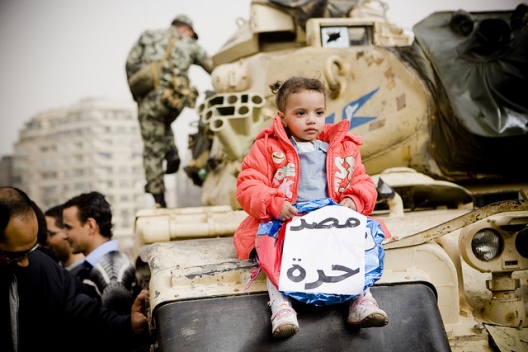 If there was any doubt, the bloody crackdown underway in Egypt confirms that the army and security services are back in the driver’s seat of an increasingly chaotic country. With the backing of secular groups, these powerful institutions are working to demolish the Muslim Brotherhood, which they label a terrorist movement, and revive the repressive systems of the Mubarak regime.
To be sure, the Muslim Brotherhood’s brief governance of Egypt under elected president Mohamed Morsi seriously threatened democratic development there. Morsi rammed through an unrepresentative constitution and decreed his actions above judicial review. He and other Brotherhood leaders promoted intolerance and sought to restrict rights, control the judiciary, and enshrine an unfair electoral system.

And yet, many of the millions of Egyptians who flooded the streets to oppose Morsi on June 30 sought to reset the shaky democratic process — not to reverse it. Instead, by allying with the army and police to oust Morsi and by endorsing a crackdown, they are enabling the re-creation of a security state under the guise of ‘managed democracy.’

This is a bitter outcome for President Obama, who in 2011 reversed decades of American support for Egypt’s dictators and embraced the prospect of a democratic transition. But America now must deal with the Egypt that is emerging, not the one it would wish to have.

At this point, the Egyptian military is unlikely to be moved by any punitive steps Obama might take. US policy, then, should be aimed not at influencing events in Cairo now, but at positioning Washington to confront authoritarian abuses and nudge Egypt toward democracy over the longer term.

First, the United States must establish distance from an Egyptian military that’s stoking vicious anti-Americanism, violating human rights, and revitalizing the repressive apparatus of the old dictatorship. That means doing what should have been done on July 3 and complying with the Foreign Assistance Act. This law requires that aid be halted in the face of a military coup until a democratic government is restored.

Although the US-Egyptian military relationship has long been a cornerstone of regional order, that stone has crumbled. The deepening standoff in Egypt has already produced instability throughout the country, especially in Sinai. Domestic crisis prevents Cairo from playing a stabilizing regional role, and could signal the emergence of a new, broader extremist threat from Islamists being driven underground. Some Islamists have indeed chosen unacceptable and horrific violence. But in labeling all Brotherhood supporters as terrorists to justify a crackdown, the Egyptian government is provoking greater turmoil.

Yet President Obama must do more than protect against Egypt’s instability — he must show Egyptians that he supports their demands for dignity, freedom, and opportunity, and that he knows dictatorship is no solution for them. (His aid promises in 2011 were paltry and barely realized.) Now he should announce that, for each of the next five years, $1 billion of what would have been Egyptian military aid will be set aside in a trust fund for Egypt. This $5 billion would become available if and when Egypt is controlled — not just formally headed by — an accountable executive and legislature elected through a fair and open process. When that government takes office, it can work with Washington to set priorities and use this money for Egypt’s national development.

The remaining $300 million in annual military aid would remain suspended under the law until the Egyptian government begins a real democratic transition and demonstrates its respect for human rights norms and for civilian authority. Once the government shows its commitment to these goals, the military aid could be used for US-Egyptian security cooperation on priority issues, like fighting jihadi groups operating in the Sinai Peninsula.

These proposals would enable the United States to sustain its most critical ties to the Egyptian government while making clear that the United States will not continue business as usual with a repressive government that is exacerbating instability. The proposals would put significant US support behind Egyptians’ aspirations, and could help Egypt recover from the violent unrest underway.

After the upheavals of the Arab Awakening, it should be abundantly clear that regional stability will only come through more accountable and responsive government. For a superpower like the United States, stability is the touchstone for all other policy success in the region. The Egyptian military — reinforced by Islamist rejectionists — has chosen to push its country further down the path of violent confrontation. The United States must avoid reinforcing that destructive path, and instead offer a vision of Egyptian-American cooperation for the day when Cairo is ready to chart a new, democratic course.

Tamara Cofman Wittes directs the Saban Center for Middle East Policy at the Brookings Institution. Amy Hawthorne is a senior fellow in the Rafik Hariri Center for the Middle East at the Atlantic Council.

This article was originally published in the Boston Globe.