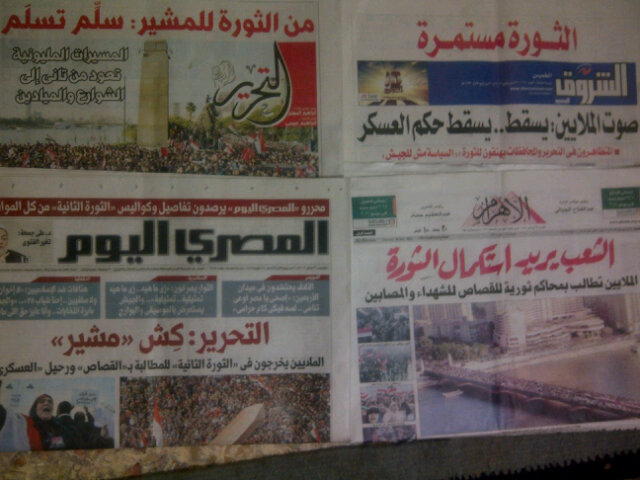 After sunset on the anniversary of the Egyptian revolution, calls for anti-government protests began to overshadow the previously festive atmosphere in Tahrir Square. Click here for video of the crowds on EgyptSource. Hundreds of thousands of protesters remained in the square after what was framed by the government as a day of celebration, which some claim drew an even bigger turnout than the mass demonstration on February 11 of last year, the day of Hosni Mubarak’s resignation. Several groups including April 6, Kefaya, and Mohamed ElBaradei’s campaign declared an open-ended sit-in and many protesters were making preparations to stay overnight and possibly much longer. According to media reports, the marches alone – converging on Tahrir Square from Mostafa Mahmoud Mosque, from Cairo’s Ramses, Ghamra, Shubra and Giza districts and other locations around the city – brought over 300,000 people into the square. Security forces were noticeably absent from the scene, and despite promises that the armed forces would participate in official celebrations in Tahrir, the SCAF appears to have canceled those plans. [al-Ahram, English, 1/25/2012] [al-Ahram, Arabic, 1/25/2012]

NOTES FROM THE JANUARY 25 PROTESTS:

2) Although the protests on January 25 were overwhelmingly peaceful, at least 146 injuries – most of them minor and related to traffic accidents – were reported by the Ministry of Health. A number of thefts were reported and three “baltaggiya” (thugs) were arrested for stealing cell phones in the square. [al-Ahram, Arabic, 1/25/2012] [al-Masry al-Youm, Arabic, 1/26/2012]

3) A separate group of around 1,500 protesters gathered outside of the Maspero state television headquarters on the night of January 25 to condemn the media’s complicity with the SCAF’s agenda. They announced an open-ended sit in and attempted to breach the barbed wire barricades protecting the complex. [al-Ahram, Arabic, 1/25/2012] [al-Masry al-Youm, Arabic, 1/26/2012]

4) The Muslim Brotherhood, which had previously announced that it would vacate the square at 4 pm, was still a dominant presence five hours later. In meetings yesterday, it was suggested that the military had enlisted the Muslim Brotherhood to secure the square with popular committees until Friday, January 27, and suggested that security forces could be redeployed in the square if members of groups declaring an open ended sit-in – Kefaya, April 6, Mohamed ElBaradei’s campaign, the Union of Revolutionary Youth, and others – refuse to vacate. Others attributed the Brotherhood’s strong presence to its efforts to pressure the military into transferring power to civilians. [al-Ahram, English, 1/25/2012]

5) The Muslim Brotherhood’s prominent stage was a focal point of festivities, while many other groups in the square – including family members of protesters killed last year – objected to the celebratory atmosphere on what, to them, was a day of mourning. Friends and relatives of protesters killed during the revolution were reportedly angered by the Muslim Brotherhood, which led patriotic songs and staged a marriage on its podium in front of Omar Makram Mosque, located adjacent to Tahrir Square, saying that today was not a day to celebrate. Many protesters wore masks resembling slain activists Khaled Said, Mina Daniel, Sheikh Emad Effat and Ahmed Harrara, while others wore the controversial “V for Vendetta” mask – in reference to the revolutionary graphic novel – to protest claims by the Muslim Brotherhood that those who wore them were anarchists. [al-Ahram, English, 1/26/2012]

6) Prime Minister Kamal al-Ganzouri made a speech from Tahrir Square on January 25 thanking and commemorating those killed and injured in the revolution. He also thanked Egypt’s newly-elected parliament, the police and the SCAF. [al-Ahram, English, 1/26/2012]

7) Headlines of Egyptian newspapers on January 26 proclaimed “Down, Down With Military Rule” and “The People Want the Fall of Military Rule.” [Twitter, Arabic, 1/26/2012]

8) The April 6 Youth Movement has launched a Facebook campaign calling for a “Day of Rage” this Friday, January 27,” to condemn the military’s “disregard for the revolution and campaign to smear the image of revolutionaries.” April 6 is also demanding that the SCAF step down immediately transfer all of its powers to the newly elected parliament, as “the only legitimate representative of the people.” [Facebook, Arabic, 1/26/2012]

9) Sheikh Hazem Abu Ismael, an Islamist running for president, called for the abolition of the Shura Council (slated for elections starting on January 29) and “instantly” opening the nomination period for presidential candidates. [al-Masry al-Youm, Arabic, 1/26/2012]

10) The “Our Egypt” campaign issued a statement calling for the presidential election to be held before a new constitution is written, rejecting the timeline backed by the SCAF – which envisions a constitution written in the next 2-3 months. The statement cited the constitutional amendments ratified by popular referendum last March, which implied the sequence of parliamentary elections followed by the presidential election and finally the drafting of a constitution by a constituent assembly chosen by the People’s Assembly and Shura Council in the presence of a legitimately elected president. [al-Youm al-Saba’a, Arabic, 1/26/2012]

12) Undersecretary of State Robert Hormats said that the Obama administration plans to accelerate the pace of American aid to Egypt to provide "more immediate benefits.” Under the plan, some non-urgent U.S. aid slated for other countries – he did not name them – would be redirected to Egypt. And funding in the pipeline for long-term programs in Egypt would be shifted to quick-impact projects, he said. It was unclear whether the total amount of U.S. aid to Egypt would be increased. "Whether it’s an increase or whether it’s reprioritizing existing assistance, we’re still working this out," Hormats said. [Reuters, English, 1/26/2012]

13) State Department spokesperson Victoria Nuland said on January 25 that the United States “will not interfere in any transitional arrangements in Egypt,” but noting that the U.S. expects the SCAF to fulfill its obligation to transfer power to civilian leaders in June. Nuland said the U.S. is also “seeking clarification” on the SCAF’s statement that emergency laws could still be applied in cases of “thuggery.” [SMH, English, 1/25/2012]