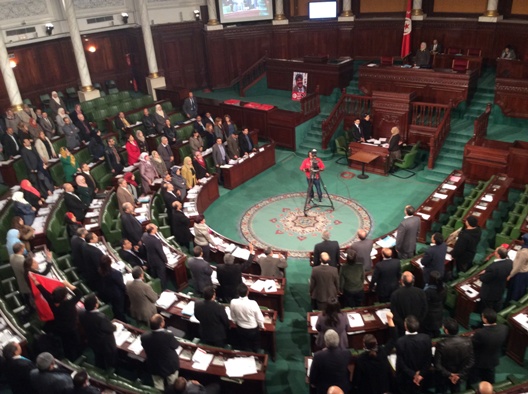 Something remarkable is happening this week in Tunisia. The National Constituent Assembly is in the final stages of adopting a new constitution, the first of the Arab Spring and, indeed, the first in the Arabic-speaking world written democratically and not under the influence of a dictator or foreign power. In a spectacle rarely seen anywhere let alone in North Africa, 200 legislators are sitting down day by day to debate the tenets of a democratic society. They are meeting in the vaulted room that once held a puppet assembly under the former regime. Today, they make group edits to draft constitutional articles that have been debated in committee for months and are now posted to a Word document projected overhead, voting every twenty minutes or so to pass text into the final document. About 40 percent of those seated are members of Ennahda, the moderate Islamic party; the rest represent a spectrum of political parties, including centrists, socialists, communists, and independents.

One article stands out. Article 45, passed on Thursday, compels the state to seek “parity between men and women in elected assemblies,” perhaps the most progressive constitutional article regarding equal gender representation in the world. Before the vote, a passionate debate broke out on the floor of the Assembly. Monia Ibrahim, a representative of Ennahda, sitting in the front row and emblazoned in a red hijab, railed against the article, arguing that it violated the principle of equality — a cornerstone of the revolution. Despite her pleas, the article was passed: 116 for, 32 abstentions, and 40 against, with Ennahda voting overwhelmingly in favor. When the vote was announced, the entire Assembly rose and sang the national anthem, in unison.

Article 45 will still have to be implemented by subsequent legislation, and there is still some disagreement over what it means that the state will “seek to achieve parity.” There are various options available in electoral design that can work toward parity that the Assembly will consider when drafting the electoral law, and without precedent, it is unclear which of these will be constitutional. The fact remains, however, that Article 45 represents the progressive measures that only a genuinely free deliberative assembly could take, and that the debate and acceptance by the “losers” bodes well for the perseverance of Tunisian democracy.

Other articles could represent stumbling blocks. The Assembly on Sunday voted down Article 90, which outlined the powers of the prime minister. The distribution of executive powers has been at the center of the constitutional debate in the Assembly for the past two years, and yesterday’s vote against a central provision of the final bargain means that members will have to return to the negotiating table. A “consensus committee” of twenty-two members from various political blocs was established to broker agreements on the remaining articles, which would then be passed to the plenary. The vote against Article 90 represents the plenary’s first rejection of an article endorsed by the consensus committee. As Ennahda’s Sahbi Atig said on the floor, Article 90 was a piece of the overall framework agreed to by the consensus committee on executive powers, which means that their work is not done. The articles on the judiciary are also quite contentious and carry many proposed amendments. The judiciary chapter calls for a new constitutional court with many powers and responsibilities that will have to be fit into the existing legal and political order — no small challenge for an emerging democracy.

Passage of the constitution requires an absolute majority vote on each article (the current stage) and then absolute two-thirds majority vote on the document as a whole by the 217 members of the Assembly. The Assembly has two chances to vote in favor by two-thirds (with edits in between each vote), or else the constitution will be passed to a public referendum. Texts of the draft articles, as well as a live tweet on the proceedings, are available from Marsad and al-Bawalsa in French and Arabic. The Assembly planned to finish the constitution in time for the third anniversary of the Tunisian revolution on January 14, but that is virtually impossible; expect the voting to continue for the next one to two weeks.

The constitution is the biggest component that remains of a delicate political transition. Amid the constitutional debate, the Assembly on Thursday approved the final membership and leadership of the independent elections commission, after six months of a slogging battle between political parties. The elections commission will begin preparing for legislative and presidential elections that will be held under the new constitution once adopted. According to an agreement reached outside the Assembly at a so-called “national dialogue” sponsored by President Moncef Marzouki, the prime minister, Ali Laarayedh of Ennahda, resigned in favor of a technocrat, Mehdi Jomaa, after the elections commission was appointed. Jomaa will oversee the elections and will serve until the new parliament can form a government after elections, expected sometime this year. Laarayedh’s resignation represents another first in the Arab world: the peaceful transfer of power from an Islamist government to a technocratic one.

The biggest remaining question for Tunisia is whether the consensus around the constitution and the stages of the political transition have garnered sufficiently broad support from political elites. President Marzouki’s national dialogue included representatives from major political parties and groups, including some not represented in the Assembly, such as former prime minister and self-proclaimed presidential candidate Beji Caid Essebsi, Ennahda president Rachid Ghannouchi, and the national labor union. These influential figures have had a say on the stages of the transition, but not on the text of the constitution itself. Essebi has consistently stated his preference for a very strong president and the re-drafting of the constitution outside the context of the Assembly. If Essebsi or his party, Nidaa Tunis, wins the presidency or a controlling share of parliament, will they buy into the constitutional bargain reached on executive powers? Broadening and solidifying elite agreement on Tunisia’s political order is the most daunting challenge in the coming year.