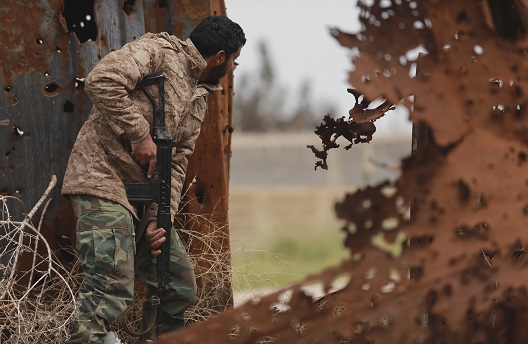 With seven months left in its mandate, Libya’s House of Representatives (House) in Tobruk has sent a high-level delegation to Washington this week. Critics of the House continue to demand greater accountability from Libya’s parliament amid mounting concerns of incompetence and corruption as Libya faces a growing threat from the Islamic State (ISIS or ISIL) and inches closer to an all-out civil war. Washington should emphasize to Libyan parliamentarians the need for more transparency and responsiveness to their electorate. US officials must urge them to engage with adversaries to negotiate a political solution to Libya’s extremism challenges.

On August 4, 2014 the House replaced its predecessor, the General National Congress (GNC), whose legacy was marred by controversy. In the run up to elections, House candidates promised to restore confidence in the country’s highest authority with improved performance and effective policy. House elections witnessed a modest voter turnout: roughly 900,000 Libyans (out of 2.8 million registered voters) participated in the elections. One House member secured a seat in the legislative body by winning a mere twelve votes—hardly a landslide victory.

The House’s first order of business was to change the location of parliamentary sessions from Benghazi to Tobruk for security reasons. The relocation contradicted the Constitutional Declaration and resulted in the boycott of thirty elected members. Critics accused the House of circumventing the process outlined by the Constitutional Declaration, which represents the only viable post-Qaddafi legal reference absent a constitution. The House’s indifference to calls for reconciliation with boycotting members only served to exacerbate the parliament’s increasingly unsettling public image and deepened the discord within Libya.

The new legislative body took a step backward from its predecessor with respect to transparency by disallowing televised coverage of its sessions. It made no effort to disclose voting records of members, many of whom reportedly continue to be outside of the country while House votes on legislation. In a recent interview, Prime Minister Abdullah Thinni, a close ally of House, admitted that House members pressured him to appoint ministers to his cabinet based solely on tribal loyalties. According to Thinni, sixty House members signed a letter demanding the appointment of a business mogul—who paid for the costs of transferring House sessions—to Tobruk to a highly sought-after governmental post.

Libya’s former intelligence chief, Salem Hassi, detailed systematic and possibly willful negligence of security dangers by Libyan parliament. In a lengthy fifteen-page letter to the House President, Hassi accused the Libyan parliament of mishandling security reports, ignoring warnings about impending threats, and allowing regional players to influence security policy. Hassi has repeatedly said that he was prevented from debriefing House members and when sacked, his post was left vacant for six weeks before House leadership requested he return to his post. He publicly declined the offer.

Perhaps one of the House’s most damaging legacies has been its blessing of and cooperation with Operation Dignity, a military offensive launched in May 2014 by then-retired General Khalifa Haftar. Promising to bring an end to Benghazi’s spree of assassinations, which claimed the lives of more than 600 security personnel and activists, Operation Dignity attracted the support of many Benghazi residents who felt let down by the inaction of Libya’s government toward the unraveling security nightmare. Operation Dignity, however, has employed unsavory tactics against suspected terrorists—a term that has encompassed all Islamists, their sympathizers, and even relatives of the involved militia groups fighting Haftar and his aligned forces.

Not only has Operation Dignity failed to recapture Benghazi since May, its indiscriminate shelling of largely civilian areas has turned large swathes of Libya’s second largest city into a ghost town. Forces loyal to Operation Dignity are accused of extrajudicial arrests and kidnappings, burning of opponents’ homes, and what a senior Obama administration official characterized as “vigilante” tactics. Prisons run by Operation Dignity officers remain a black hole escaping scrutiny and supervision. In March 2015, a report by the United Nations on human rights defenders in Libya detailed cases of human rights violations carried out by Operation Dignity and its rivals alike. In particular, it points out the kidnapping and continued imprisonment of a Benghazi prosecutor investigating killing of Libyan activist Salwa Abughaighis. Forces loyal to Operation Dignity allegedly arrested prosecutor Abdel Nasser Al-Jaroushi in October, whom they placed in the notorious Gernada Prison without due process of law. To date, Al-Jaroushi has not been charged with a crime and the Minister of Justice has not responded to continued requests from the UN for answers.

Libya’s House of Representatives, the country’s highest and internationally recognized authority granted a carte blanche for Operation Dignity without outlining a code of conduct governing operations, thus opening floodgate for systematic violations under pretext of tackling an “unconventional enemy.” In addition, Operation Dignity has attracted former regime soldiers and officers to its ranks—even those implicated in terrorist acts. One such case is that of Mohamed Bennayel captured this week by Dawn forces, a rival of Operation Dignity. Bennayel has been implicated and wanted for a number of terrorist plots, including the attempted assassinations of Abdou Diouf, the former President of Senegal, and Hedi Nouira, the former Prime Minister of Tunisia.

Operation Dignity has also actively pursued aggressive tactics against its rivals in what some may interpret as a discreet effort to derail UN-led peace talks in Geneva and Morocco. The Libyan parliament’s response to a long list of criticisms is to simply and repeatedly state that the House is the only internationally recognized authority in the country. Such recognition, however, comes with commitment to accountability and responsible governance.

The United States and Libya’s international partners have consistently called for dialogue and reconciliation among Libya’s key players to create a strong unity government capable of tackling extremism; Libya’s international partners have asserted unequivocally that a military solution is a disastrous option in a country fraught with Qaddafi-era weapons and non-existent rules of engagement. The House’s participation in UN-mediated dialogue talks have been reluctant and half-hearted at best. As the Washington community meets with the House’s delegation, it should emphasize the need to address its problematic pattern of secretive and incompetent practices. It should remind Libyan parliament that it must abandon its divisive stance toward its adversaries and that relying on force alone to fight extremism is not only ineffective, but it’s not sustainable. The House still has an opportunity to drive positive change during Libya’s tumultuous times. Its Washington hosts should push it to assume that role.

Asma Yousef Magariaf is a Libyan American communications consultant based in Washington, DC.

Image: A member of the Libyan pro-government forces, backed by the locals, is seen with a weapon during street clashes with the Shura Council of Libyan Revolutionaries, an alliance of former anti-Gaddafi rebels who have joined forces with Islamist group Ansar al-Sharia, in Benghazi March 16, 2015. (Reuters)