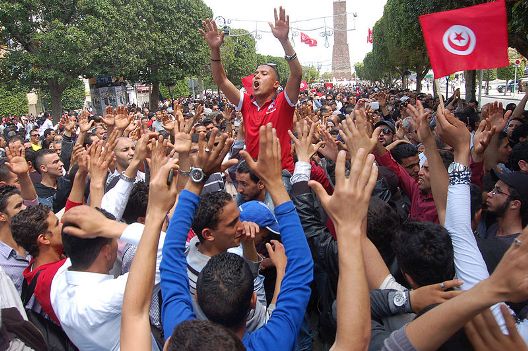 Tunisia is amid its most turbulent political crisis since the revolution that toppled Zine El Abidine Ben Ali over two years ago. A confluence of factors has brought the crisis to a head. The spark was the tragic assassination of Mohammad Brahmi, an outspoken opposition member of the National Constituent Assembly, on July 25, the second secular political leader to be killed since March. The ouster of Mohammad Morsi in Egypt two weeks earlier emboldened secularist protestors and, more importantly, frightened Ennahdha, the Islamic ruling party in Tunisia. Ennahdha became defiant and many members publically denounced the ouster, making them anxious to move the constitution through the constituent assembly.

The constitution was nearly complete; a committee of outside experts was making comments, and before the assassination and the Morsi ouster, Ennahdha leaders had planned to finish the constitution by October at the latest. Fearing resurgent anti-Islamist sentiment, Ennahdha leaders moved up the deadline to August and called for presidential and parliamentary elections under the new constitution by December. Assembly president Mustafa Ben Jaafar, leader of a secular coalition partner of Ennahdha, suspended meetings on August 7 over the objections of the Ennahdha leadership. Meetings have not resumed, and a bloc of secular assembly members have vowed not to return even if they were.

A series of high-level negotiations followed the suspension of the constituent assembly meetings. Remarkably, many of the negotiating parties are unelected. Ennahdha’s position—represented by party president Rached Ghannouchi, who is not a member of the Assembly or the government—signaled willingness to compromise by offering a quick end to the constitution-making process, fast elections, and the appointment of a technocratic government to lead the country through election day. The latter concession was offered after a meeting on August 22 with Houcine Abassi, the president of the UGTT, the most powerful trade union in Tunisia but with no elected members in the constituent assembly. Though unelected, the backing of UGTT is critical to national stability in the transitional phase. Even though it is unelected, UGTT demands attention due to its power to bring hundreds of thousands of Tunisians to the street by calling for a general strike, which breathed life into the Tunisian revolution in late 2010.

Another unelected actor in the negotiations is Nidaa Tunis, the secular political party founded by Beji Caid Essebsi, a senior Ben Ali–era official and prime minister after his fall. Nidaa Tunis, formed in June 2012 after the constituent assembly elections, harkens back to the days of Habib Bourguiba, Tunisia’s first president, characterized by strong French-style secular presidentialism. Polls show that Nidaa Tunis would fare well in parliamentary elections and could win the presidency in a head-to-head election against Ennahdha. In these negotiations, Nidaa Tunis has demanded the resignation of the Ennahdha government, the dissolution of the constituent assembly, and the appointment of a committee of experts to draft a new constitution. Several rounds of negotiations have been held between Ghannouchi and Essebsi, including one facilitated by German foreign minister Guido Westerwelle. Nevertheless, Nidaa Tunis Secretary General Tayyib Bacchouche countered Ghannouchi’s offer from August 22 the day after he made it, calling for nothing less than the end of the draft constitution and dissolution of the constituent assembly. Nidaa sympathizers launched a week of protests on August 24.

As Fabio Merone noted, Ennahdha (and a handful of opposition members in the assembly) are the only political leaders in Tunisia that have stuck to the rhetoric of democracy since the Brahmi assassination. Nidaa Tunis and its allies come across as opportunistic in their call for restating the constitution-making process. The constitution as it stands includes many concessions that secularists should view favorably. Islamic sharia, usually the sine qua non of Islamist parties, is not referenced, and the president is much stronger than Ennahdha originally preferred. Although Ennahdha led the drafting process, they did so in coalition with two secular parties and with significant contributions from opposition members. The increased partisanship of Tunisian politics since elections for the assembly make such cooperation much less likely now. Tunisia’s secular parties remain fractured and would face a unified and emboldened Ennahdha going into new elections.

This vulnerability is the reason Nidaa Tunis supports the appointment of a “committee of experts” to draft a new constitution—in other words, a team of legal scholars from Tunisia’s predominantly secular law faculties in the model of the Ben Achour commission of 2011 (which did highly admirable work but very little to please Ennahdha).

The way forward will require a deal on three major and related factors. First is what to do with the current and nearly draft of the constitution: finish it up or start fresh? The positions of Ennahdha and Nidaa Tunis are as yet opposed. Second is what to do with the current government: keep it, or appoint a new one? Likely any deal that would satisfy secularists would require the appointment of a technocratic government until elections could be held. This is not a big concession for Ennahdha since new parliamentary elections are due by the end of the year. Ennahdha’s public concession to the secular Democratic Alliance Party to appoint an independent caretaker to run elections appears to keep both secular and Islamist interests intact, but Nidaa Tunis’ response will signal whether the deal can build traction toward final reconciliation.

Third is the appointment of the members of the electoral commission and the drafting of a new electoral law. The constituent assembly has already appointed eight of nine members of the elections commission and was close to a deal on the ninth before meetings were suspended. The appointment of the final member is important as Nidaa Tunis rejects elections on the grounds that Ennahdha could not be trusted to run new elections (a red herring, as the elections commission is independent and includes Nidaa-backed members). Assembly members play down the importance of the electoral law, seeing it as a largely technical document that will be drafted by the elections commission, but the structure of the law has enormous implications for the makeup of parliament after elections. One way that it matters is in whether the law will include a threshold of votes that a party must win nationwide to get a seat in the assembly. Some Ennahdha members have been pushing for a five-percent threshold (equal to that of Germany), which if applied to the constituent assembly elections, would have excluded a number of small secular parties. The assembly has not yet debated this and other important issues in plenary, which could turn unexpectedly contentious when meetings resume.

How these three issues will be managed and decided upon remains unclear. Negotiations outside the assembly between, Ghannouchi, Essebsi, and Abassi appear to be making marginal progress. The key will be to getting assembly members to iron out final details of the constitution and the electoral law, and to appoint a new caretaker government.