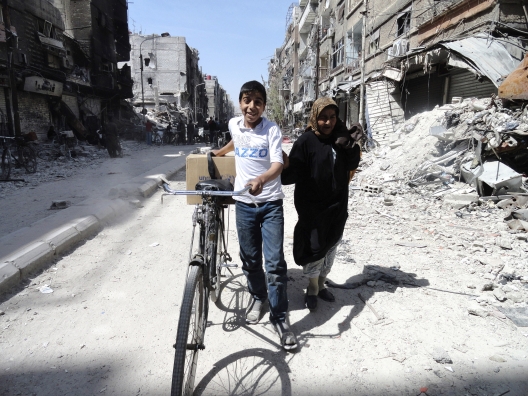 Philip Gourevitch had the terrible duty to chronicle the spasm of genocidal violence that visited Rwanda twenty years ago. His work captured in intimate detail not only the gruesome action of machetes but also victims’ unheeded appeals for help. In a tragic episode that gave Gourevitch’s book its title, a group of community leaders huddled as the tide of violence approached Mugonero, western Rwanda, and penned a letter seeking protection.

How are you!
We wish you to be strong in all these problems we are facing. We wish to inform you that we have heard that tomorrow we will be killed with our families. We therefore request you to intervene on our behalf and talk with the Mayor. We believe that, with the help of God who entrusted you the leadership of this flock, which is going to be destroyed, your intervention will be highly appreciated, the same way as the Jews were saved by Esther.
We give honor to you.

The next morning, the Sabbath, the seven signatories to the letter along with 3,000 other Tutsis seeking refuge at the Seventh-day Advent Church were beset by a mob and murdered.

Two decades later a terrible echo of the Mugonero letter could be heard from Moadamiya, a besieged town on the outskirts of Damascus. In October of last year, a group of Moadamiya residents hooked a generator to an old computer and managed to send a message to the outside world.

Dear brothers and sisters, our friends, we have managed today to find enough power to run a computer and connect to the internet. We are writing from steadfast Moadamiya, the city of olives, the mother of all martyrs; the city of death.

For nearly one year, the city of Moadamiya has been under siege with no access to food, electricity, medicine, communications, and fuel. We have been hit by rockets, artillery shells, napalm, white phosphorous, and chemical weapons. Hundreds of Moadamiya’s men, women, and children have died, and thousands have been injured. We can only pray for the wounded, as we do not have access to medicine, nor to the means to provide medical care. All we have are a few bullets to repel those who want to slaughter our families with knives and burn our children alive. Save us from death. Save us from the hell of Assad’s killing machine.

Unlike the torrential pace of the Rwanda violence—800,000 dead in 100 days—the violence across Syria is a slower drip. In Moadamiya and other besieged towns, hundreds of thousands of residents are trapped, slowly starving, eating leaves and pets, waiting in vain for relief to arrive.

On April 8, 1994 the Acting Assistant Secretary of State for African Affairs delivered a press briefing on the spreading ethnic violence in Rwanda. Following these remarks, the State Department spokesperson took to the podium to criticize foreign governments that had recently prevented screenings of Schindler’s List, a film that “movingly portrays… the twentieth century’s most horrible catastrophe” and reminds us that the “most effective way to avoid the recurrence of genocidal tragedy is to ensure that past acts of genocide are never forgotten.” During this briefing, as retold by Samantha Power in “A Problem from Hell”, neither State Department official drew any connection between the two topics nor noted the unfortunate irony.

On April 7, 2014, twenty years later, the White House press corps made a point to draw the connection between past and present mass atrocities. A day after the anniversary of the Rwandan genocide had been marked by President Barack Obama (“the genocide we remember today—and the world’s failure to respond more quickly—reminds us that we always have a choice”) and Secretary John Kerry (“we reaffirm our commitment to help ensure that other countries do not face the pain and sufferings Rwandans endured”) journalists pressed the White House on parallels with Syria. A reporter asked, “This anniversary comes as we’re seeing what we’ve seen unfold in Syria, another mass humanitarian crisis, mass killing, more than two million displaced people. Are we looking again at another ‘never again’ moment?” As White House Spokesperson Jay Carney replied with a laundry list of actions the United States is taking to address the conflict the reporter interjected: “You may think you’ve acted aggressively, but you can’t think that the efforts of the United States have been successful.” “Well, no,” Carney conceded, “certainly the war continues. The killing continues. What we are constantly doing is reviewing and assessing what else we can do.”

What else we can do.

A strong case can always be made against intervention in foreign conflicts. In 1994, President Bill Clinton’s administration was juggling crises in Bosnia and Haiti, the experience in Mogadishu was fresh in the national memory, and the distant conflict in Rwanda seemed to take place in a perennially troubled region between ancient adversaries. Reluctant bureaucrats proffered legalistic arguments about Rwanda’s sovereignty, ruling out even jamming radio broadcasts stoking the genocidal fervor. Clinton appeared in an ABC segment that opened, “Rwanda: Is the world just too tired to help?”

In 2014, the Obama administration is juggling a crisis in Ukraine, the experiences in Iraq and Afghanistan are fresh in the national memory, and the conflict in Syria seems to take place in a distant, perennially troubled region, animated by ancient hatred. Reluctant bureaucrats proffered legalistic arguments about Syria’s sovereignty, ruling out even delivering humanitarian aid without Assad’s permission. Obama recently appeared in a CBS segment where he said of Syria, “It’s not that it’s not worth it. It’s after a decade of war, you know, the United States has limits.”

As with Clinton and Rwanda, there is no significant constituency calling for increased engagement in Syria. Obama is surely correct if he calculates that he will incur no domestic political costs for sidelining the problem. The violence in Syria, like that in Rwanda twenty years ago, is widely viewed as irrelevant to US national interests; it is “someone else’s civil war.”

Four years after the genocide, Clinton had come to see events in Rwanda differently. He visited the country and offered something like an apology. “We in the United States and the world community did not do as much as we could have and should have done to try to limit what occurred. It may seem strange to you here but all over the world there were people like me sitting in offices, day after day after day, who did not fully appreciate the depth and the speed with which you were being engulfed by this unimaginable terror.”

Intelligent people can look at the reality in Syria and disagree whether the United States could and should do more. But in twenty years let us not look back on a Mediterranean society destroyed and several hundred thousand dead and bemoan that we did nothing of positive consequence. We faced the choice head on and decided against the messy job of helping.

Matthew Hall is Assistant Director at the Rafik Hariri Center for the Middle East at the Atlantic Council.