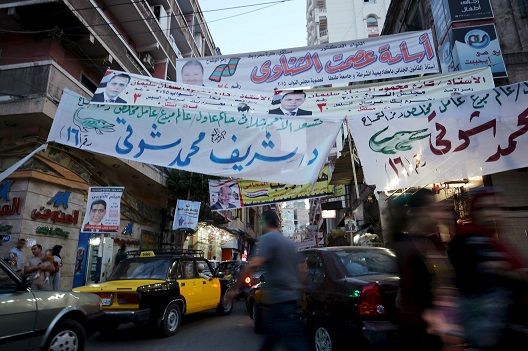 Following a recent controversy where a British journalist at a conference in Egypt casually implied that the peoples of the Arab world were more culturally inured towards restrictions on press freedom, we discussed the issue of democracy and Arab culture with Atlantic Council’s senior non-resident fellow, Dr. H.A. Hellyer.

“That journalist asserted that people shouldn’t be ‘alarmed’ at the state of press freedom in the Arab world, because there are “many, many cultural differences that have to be taken into account when considering the freedom of press. There’s a lot in that statement—what  went through your mind when you heard that?”

I’d like to start by saying that when the journalist in question was challenged on that statement by people online, he did apologize unreservedly once he realized the implications of his statement. And the journalist wasn’t calling for abuses or for journalists to be locked up, or anything like that. But the narrative he was promoting, unconsciously I am happy to assume, was precisely the narrative that is used time and time again to justify overlooking the abuses of people in this region. Which is that, basically, the peoples of this region are not quite as deserving of dignity as those of us in Europe and the United States. And thus, we should have low expectations on the one hand, and give a free pass to those that abuse or harm them on the other.

Sometimes that narrative is promoted by external actors with a certain amount of naivete or innocence– or let’s say, a lack of consciousness. But very often, that narrative is promoted by people who benefit from the current state of affairs. They benefit from the inequality, the exclusion, the corruption–for them, this isn’t a deluded article. It’s a completely self-serving one.

“Are you thus making an argument for the promoting of democracy in the MENA region?”

There is a ‘promotion of democracy’ heritage among a portion of the American think tank and policy establishment—I’m not critiquing it in this instance. It would require something of a complex critique, because the discourse and the rhetoric of that kind of heritage is wound up with a lot of baggage in the region.

But that’s a different—if of course related—question, in my mind. Irrespective of ‘democracy promotion,’ there are more basic notions that don’t require much in the way of deep philosophising. Notions such as we—Europe and the United States—should simply do ‘no harm,’ and respect people’s innate dignity, we should uphold certain standards in how we engage in the world ethically, we should take seriously the peoples of the Arab world as individual agents who have their own destinies, and whose dignity we should respect, even while those who rule them often do not.

No one external to the region should take that ‘do no harm’ principle, neverthless, as a way to justify indifference or paralysis. Doing no harm and respecting people’s dignity, entails listening to voices within the region who are demanding their dignity be upheld, rather than fleeing away from listening on the basis of ‘non-interference’. And by the way, we won’t always agree with everything such voices say—including about us—but that’s OK. They have agency, just like we do-we ought to respect that, and that entails defending that dignity.

“Are you saying we don’t actually respect these countries? Many western capitals seem to have great relationships with different Arab capitals, after all. I mean, we don’t treat them all like North Korea, right?”

I think you have two kinds of people in western policy circles on this issue. There are people who genuinely care about what happens to the peoples of the Arab world, because those peoples are made up of human beings who have inalienable rights, and we ought to respect their dignity as such. They care about what happens in Egypt for Egypt and for Egyptians, for example, as opposed to how that plays out for a narrow sense of what our foreign policy interests might be.

And then there are those for whom the region is basically a far away object, which is relevant only in so far as it serves a chauvinistic interpretation of what our national interests are. If ten thousand people are slaughtered in five minutes in one of those far away places, we might tsk tsk and tut tut, but it has no effect or bearing on the trade deals we have, so we don’t really care.

I do think we have to be very plain about this because, for better or for worse, the United States in particular, and western states in general, are involved in the Arab region. If we are involved, then let us be involved ethically, or at least try to minimize damage.

“But apologists for autocracy will often turn around and say things like, ‘If president X or ruler Y insists that human rights are not a priority, that their countries are not ready for democracy, who are we to say otherwise?’ What do we say to that?”

It’s a tempting—and very convenient—frame to imbibe, I know. And if president X or ruler Y wants to insist that, then that is surely their peregoative. And you know, many of the elites that we are happy to speak to in these countries—the ones that speak western languages and come from the most economically well-off—also tout these kinds of narratives. If they wish to insist they’re not ready for democracy, or that their fundamental rights are not to be respected, then of course, we should listen to those elites– but just about themselves.

But let’s not make the mistake of thinking they automatically speak for everyone who is poorer than them or less powerful than them. In 2010, there were those who constantly told Western policy makers that the peoples of this region were perfectly happy with the way the things were, and didn’t care about having a chance to live differently—where their fundamental rights would be respected, and where they would have a choice about who ruled over them. And that was nonsense, as we saw so very clearly in 2011.

“Are you then arguing that we in the west should be trying to export ‘western values’, writ large, or something of that nature? A sort of internationalist version of ‘muscular liberalism’?”

No, not in the slightest. I’m not interested in anyone attempting to engage in some kind of ‘cultural imperialism’. These countries and societies have their own histories, traditions, and stories—and part of recognising and respecting their dignity means recognising and respecting their autonomy and agency in how they mediate and engage in the contemporary world. They have every right to do so on their own terms–and we may learn from them as they do so. Yes, we may indeed do so.

But all too often, this proclaimed indignation about ‘western cultural invasion’ is a red herring, brought up whenever an autocrat wants to defend his abuses, or when an apologist trying to do business with said autocrat wants little to no scrutiny about the self-serving deals he is engaging within. When journalists are locked up, or when other fundamental freedoms are denied—the very same fundamental freedoms that these same autocrats and dictators often will proclaim as necessary—we don’t need to falsely excuse it on the altar of ‘culture’. And when people in those places speak up about it, we should hear them, we should pay attention to them—if for no other reason than to recognise the reality on the ground. Instead, by and large, we seem to try to pretend they don’t exist—unless they hold western passports. Let’s be honest about this.

“But let me press you on this—do you mean, then, that Arabs should be given western style democracy? Looking over recent history, it doesn’t seem like it always works out, even in the West?”

That’s very true, and like I said, if the idea is for us in the West, to try to ‘civilize’ the Arab world, I’m personally not remotely interested. And I am sure there are some people who fall into that trap. The trap, for example, of fetishising the notion of the nation-state model on the one hand, while we essentialize the virtues of what we consider to be modern liberal democracy on the other. Within western academia itself, we argue quite often about the internal contradictions of such things—and that is for us in the West, where the nation-state model, arising from the Treaty of Westphalia and so forth, was rooted. And let’s be clear: modern liberal democracy, warts and all, isn’t universally rooted, nor was it universally founded.

So, no, I don’t think we need to insist—nor should we insist—that all these peoples and countries must embrace ‘everything’ that we might have in Europe or North America. They have their histories, and those histories ought to be respected. Who knows—maybe they will come up with better models, that we can learn from, just as we did in other periods of history. Or maybe they will learn from us, and they will mediate that exchange of ideas for themselves.

Indeed, insisting that all these peoples in the Arab world become ‘just like us’ in terms of all of what we describe as our ‘norms’, which are nonethless contested anyway, even within our own societies in the West… well, frankly, that’s just another way of denying their dignity. Because we’re denying their identities, and we’re denying they have anything truly to offer to the world that might be unique, independent, and worthwhile.

There is an easy way to navigate away a false sense of ‘cultural relativism’ in excusing abuses, and away from justifiying ‘cultural imperialism’ that negates the worth of any unique and valuable contribution from within the region. It’s just about respecting the individual and communal dignity of the peoples of the region. And celebrating their dignity, which means upholding it as a value, just as we would our own dignity in the west.

Image: Photo: Electoral banners are seen on a street in Alexandria, Egypt, October 18, 2015. Egyptians turned out in low numbers on Sunday to vote in the first phase of an election hailed by President Abdel Fattah al-Sisi as a milestone on the road to democracy but shunned by critics who say the new chamber will rubber stamp his decisions. REUTERS/Asmaa Waguih