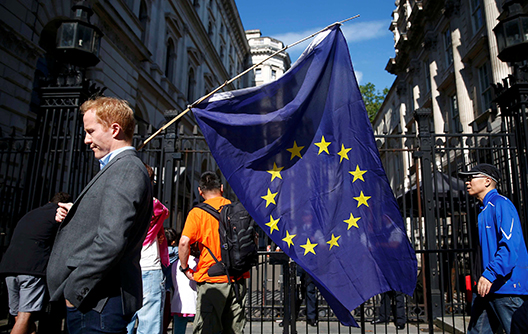 The startling result of the referendum on the United Kingdom’s membership of the European Union has caused political and economic chaos in Britain unparalleled since World War Two. Prime Minister David Cameron will be out of power by September 2 and Britain faces a period of profound uncertainty and volatility over the nature of its future relationship with the EU. While the next prime minister may come under pressure to seek an electoral mandate through a new general election, the implosion of the opposition Labor Party means that it is likely that the ruling Conservative Party will continue to govern. This is likely to minimize the fallout from ‘Brexit’ on the Middle East and may even lead to greater British engagement with Gulf partners in a bid to offset economic and commercial volatility in Europe, while for the EU the ramifications of the vote will further undermine the already weak efforts to forge a common foreign and security policy or deal effectively with the Syrian refugee crisis in Europe.

In the immediate term, the most direct impact of Brexit will fall on the heavy investments in Britain held by Gulf sovereign wealth funds and other high net worth individuals, who face a period of considerable uncertainty and may seek to shift investments to safer havens. Oil prices may also take a hit if the turmoil in the UK leads to slower economic growth that drags Britain and/or the EU into a triple-dip recession. Any such impact may be tempered in the next few months by signs that Brexit does not necessarily entail UK disengagement from the EU, particularly if the British government refuses to trigger Article 50 of the Treaty of Lisbon that sets in motion the two year separation period. After claiming during the campaign that he would activate Article 50 immediately, in the event of a Leave vote, Cameron notably did not do so and has claimed that such a decision would be left to his successor as Prime Minister; however, the most likely candidate, Boris Johnson, has significantly watered down his enthusiasm for doing so in his post-Brexit comments, amid growing signs that the British political class is shocked by the outcome of the referendum and seeking to delay acting upon the result for as long as possible.

British policy toward the Middle East, and particularly in the Gulf, is unlikely to alter significantly if the Conservatives remain in government under a new Prime Minister. Since coming to power in 2010, initially in coalition with the Liberal Democrats, the Conservatives have focused heavily on building up economic and commercial relationships with the Gulf States and rebuilding historic ties that were perceived to have suffered during the Labor years of Tony Blair and Gordon Brown. The ‘mercantile’ foreign policy that resulted has been criticized for seemingly putting trade and investment over political and human rights issues, but it brought British-Gulf relations closer together. Moreover, since 2013, Britain has returned militarily to the Gulf (which was under British protected status until 1971) while senior politicians in the United Kingdom have even revived the old ‘East of Suez’ term that had lain fallow for decades.

It is not inconceivable that a new Conservative prime minister might redouble the outreach to the Gulf if it can partially offset the spiraling uncertainty in EU relations. The Gulf is one of the few areas where Britain holds a natural advantage, partly through a sense of shared history but additionally through the soft asset of the British royal family, and this closeness offers the UK an opportunity in the coming months, especially in the (unlikely) event of a victory for Donald Trump in the US presidential election in November. Rulers in GCC states have, in any case, no strong attachment to the EU, and they recall with frustration the failure of the lengthy negotiations for a Free Trade Agreement; moreover, EU-Gulf ties have long been undercut by the preference of both Gulf and European states to deal bilaterally with each other rather than through the blocs themselves. This strongly bilateral emphasis will continue and will likely intensify in the wake of Brexit.

More broadly, EU policy toward the Middle East will suffer from the growing sense of drift in European policies at all levels and, in particular, in the formulation of a common foreign and security policy. Britain worked closely with the EU in early diplomatic manoeuvres with Iran in the late 2000s and the EU has been among the most active international partners in the Israel-Palestine arena. It is likely that a period of introspection will blunt European ‘diplomacy’ in the Middle East and make it less effective in the event of any eventual (partial or comprehensive) settlement of the conflict in Yemen or the tragedy in Syria. Finally, the impact of Brexit weakens the ability of the EU and its member states to work collectively to resolve the issue of Syrian refugee and migration crisis that has, over the past year, threatened to tear up some of the most significant aspects of the European integration project and which still retains the potential to inflict far greater lasting damage on the EU than the Brexit vote.