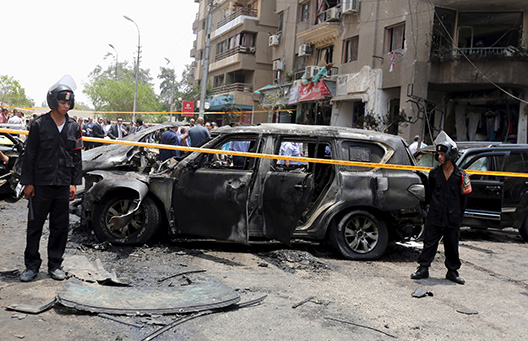 An attempted assassination at the end of September on Egypt’s assistant prosecutor general, Zakaria Abdul Aziz, highlights the capability and determination of militant Islamist actors in the Egyptian mainland to wage terror in the mainland. The attack was reminiscent of the June 2015 targeted assassination of Egypt’s prosecutor general, Hisham Barakat. In both incidents, a car rigged with explosives was left parked and detonated along the officials’ motorcade routes. However, unlike the Barakat assassination—which continues to be left unclaimed by any terrorist group—the alleged perpetrators of the Abdul Aziz attack were quick to provide evidence of their involvement the very next day. The rise of this group, which calls itself Hassm, signals the newest evolution in mainland-based violent Islamist non-Salafi Jihadi groups which are more ideologically and operationally aligned with elements inside or close to the Muslim Brotherhood.

Hassm, which is Arabic for determination and also the Arabic abbreviation for its longer name “Movement of Egypt’s Forearms,” emerged in July 2016. Its first victim, Major Mahmoud Abdel Hamid, the chief of investigations in Tamya, was known for leading a crackdown on local Brotherhood elements in Fayyoum. Hassm starting its activity in the province, one of the most active Islamist strongholds in Egypt, was perhaps no coincidence. The group appears to be the successor of the Revolutionary Punishment, a group believed to have had ties with current and former Muslim Brotherhood members and which carried out over 40 percent of its more than 150 attacks in Fayyoum.

Hassm’s other attacks also follow a pattern similar to other groups before it such as Revolutionary Punishment. On September 8, two fighters from its “Assassinations Squad” gunned down a low-ranking non-commissioned officer near his home in Giza, another Islamist stronghold where Revolutionary Punishment and other militant groups were active. Four days earlier, Hassm’s “Explosives Squad” placed several IEDs near the Damietta Police Officers’ Club. Only one detonated while police attempted to defuse it, injuring three policemen.

The most significant attack claimed by Hassm prior to the attempt on the assistant prosecutor general was the August 5 attempted assassination of former Mufti Ali Gomaa. The gunmen failed to kill Gomaa or his guards, but the attempt catapulted Hassm to national prominence as they were able to get close to a high value target. In its claim of responsibility, Hassm described Gomaa as the “Mufti of Executions,” despite the fact that Gomaa left office long before any Muslim Brotherhood members were sentenced to death. There is however an Islamist, and specifically Brotherhood, obsession with Gomaa for his perceived role in providing religious cover for the Raba’a massacre, although no concrete evidence of this exists. Sure enough, the last group to target Gomaa was Revolutionary Punishment when it planted explosives in his estate in Fayyoum last year.

Hassm’s own discourse is perhaps the strongest indicator of its ideological leanings, which are quintessentially non-Salafi Jihadi in character. This is obvious from the simple things like the use of Gregorian dates in its statements to more complex subtleties in its messages that refrain from labeling Sisi as an apostate or explicitly citing Salafi Jihadi theorists. Hassm’s own strand of Islamist Jihadi discourse appears to be an amalgam of new Sharia-based theorizations for violence written by scholars and thinkers closer to the Muslim Brotherhood than Salafi Jihadi groups. Hassm’s message, like that of Revolutionary Punishment before, and other similar smaller groups that have popped up, is instantly recognizable as borrowing from documents such as the book authored by scholars close to the Muslim Brotherhood The Jurisprudence of Popular Resistance to the Coup and statements signed by hundreds of Islamic scholars like Egypt Call and Egypt Liberation Document. Hassm’s labeling of Egypt’s security forces as “occupiers” echoes the rhetoric used in statements by pro-MB Islamist figures such as preacher Wagdy Ghoneim, Revolutionary Salafist leader Mahmoud Fathy, and former Freedom and Justice Party Member of Parliament Tarek Morsy.

To better understand last week’s assassination attempt in context it is important to note that Hassm and another group called Liwa al-Thawra popped up around the third Raba’a anniversary. A slick Facebook page titled “Resistance Media” appeared around the same time, publishing propaganda for these groups. They all appear to be part of an attempt at escalating an insurgency some current and former Brotherhood elements and their allies hoped to wage against Sisi in the mainland.

These new militant actors first began to deploy anarchic violence in late 2013 and early 2014 that relied more on acts of sabotage and rudimentary weapons. Muslim Brotherhood leader Mohamed Kamal, among others, allegedly greenlit so-called “special operations committees” in 2014 with this limited mandate. However, many of these actors quickly began to use progressively more lethal forms of violence. Sources close to the Muslim Brotherhood alleged in interviews to the author that these actors simply went rogue, beginning to more independently organize, while Brotherhood leaders feared an escalation into outright armed violence. For Egyptian authorities, this is a convenient truth. The full extent of direct operational involvement active Brotherhood leaders still have with these groups, however, continues to be shrouded in mystery.

As internal Brotherhood disagreements raged in 2015, in large part over the question of violence, the organization weakened further and lost strategic direction. The organization’s old guard, mainly represented by figures now residing in the UK, began to assert control over the group and was tactically against the escalation in violence. As a result, less Brotherhood money entered Egypt to finance operations and backers of violence—some of them allegedly Gulf Islamists and others based in Turkey—reduced or terminated their support. Due to this, and gains made by State Security, there was a precipitous drop in lethal attacks by Muslim Brotherhood-affiliated groups since around the summer of 2015 to present day. In the aftermath of this, the Islamic State tried and failed to bring armed insurgency closer to the mainland, more Brotherhood and Islamist youth left Egypt to join Jihadi groups, while others simply abandoned violent activity.

However, the rise of Hassm and Liwaa al-Thawra signals that some of these elements are still dedicated to insurgency. They appear to have recognized the failures of the previous years in deploying largely ineffective anarchic violence that sought but failed to overwhelm the regime. What happened instead was that large numbers of recruits were easily arrested without dealing much of a blow. The focus now appears to be on quality rather than quantity. Thus far, few arrests have been made in the Hassm cases which suggests better training in operational security. Investigators, for instance, believe that the car used in the assassination attempt was assembled from different stolen car parts to make it more difficult to trace. Although the assassination attempt was a failure, the group’s statements of responsibility show off the group’s somewhat advanced reconnaissance capabilities compared to other non-Salafi Jihadi Egyptian groups.

Finally, the striking similarities between the Abdul Aziz and Barakat assassinations raise suspicions once more that elements associated with the Brotherhood may have indeed been behind the Barakat assassination as the Egyptian government alleges. Either way, Hassm’s attacks seem to represent a possible new normal for Egypt. Although overall violence levels may continue to remain low in the mainland, a dedicated core of Islamist militants may be investing their resources into targeted operations and training for veteran militants. Hundreds of small IEDs, arson attacks, and assassination of low ranking officers largely carried out by amateurs failed to shake the Egyptian regime from 2013-2015. It remains to be seen, however, what impact a string of targeted assassinations against senior government officials, as well as religious, and media figures—such as the ones Hassm vows to carry out—will have on the Egyptian regime.

Mokhtar Awad is a Research Fellow at the George Washington University’s Program on Extremism.

Image: Policemen secure the site of a car bomb attack on the convoy of Egyptian public prosecutor Hisham Barakat near his house at Heliopolis district in Cairo, Egypt, June 29, 2015. Barakat died from wounds sustained in a bomb attack on Monday that had targeted his convoy in Cairo, state news agency MENA said. (Mohamed Abd El Ghany/Reuters)