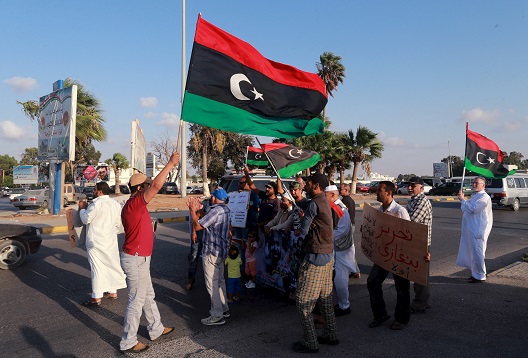 The Libyan political dialogue process has missed yet another crucial deadline—September 20 was supposed to be the date when Libyan stakeholders should have agreed to a final deal. A new round of talks has yet to be confirmed while the House of Representatives (HOR) debates the latest proposals that would potentially include amendments to the initialed agreement in order to accommodate some of the demands laid out by General National Congress (GNC), which has not yet signed the initial agreement. The HOR is expected to hold a vote on the final agreement on Monday, October 5. The real deadline for the dialogue process, however, is October 20—when the HOR’s mandate expires. What scenarios lie ahead for Libya beyond this crucial deadline and how would it affect Libya’s constitution building process?

Ideally, rival Libyan factions would reach a political deal, form a unity government, and address the issue and timeline of the constitution drafting process and Constitution Drafting Committee through the terms of this agreement. The current challenges to the agreement and the trust deficit between competing parties makes this scenario increasingly unlikely.

Alternatively, Libyan parties could reject the agreement. The HOR might then extend its mandate and appoint a president or dissolve itself after appointing a president who would run the country. In both cases, a de facto partition of Libya would likely precipitate armed escalation in contested parts of the country.

A third scenario entails the declaration of a state of emergency and the formation of a council led by the armed forces, which would take control in eastern Libya and parts of western and southern Libya. This scenario has the highest potential to disrupt the constitution-drafting process and would likely put the political process on hold—or even declare it obsolete.

Different political groups currently compete with one another over their own agendas for the future. In most cases, these agendas run contrary to each other, resulting in a zero-sum game that would produce further polarization and prolonged armed confrontation. Libya stands at the precipice of total collapse as key sectors—such as the health sector, the hydrocarbon sector, and basic services—face the risk of bankruptcy next year.

Should the current dialogue efforts and peace process fail, strong hardline movements and narratives would emerge. In eastern Libya, a movement calling for the establishment of military rule in Libya has already surfaced. If the dialogue fails to result in a unity government, this idea could see a surge of support. The armed federalists, led by Ibrahim Jathran, would also seek to position themselves as key players on the scene in an attempt to take advantage of the political vacuum that would follow the collapse of the dialogue.

The Constitutional Monarchy Movement, the only peaceful civil movement advocating for a new political order, has called for the return of the constitutional monarchy and the reinstatement of the Crown Prince Mohamed al-Rida al-Senussi. On September 11, 2015 a case filed with one of the courts in the city of al-Bayda argued the legal grounds to reinstate the 1951 constitution and the constitutional monarchy in Libya. At least for now, however, this call has not gained in popularity—particularly in western Libya, where anti-dialogue hardliners led by figures such as the Grand Mufti Sadiq al-Ghariani and former GNC member Salah Badi (and commander of the armed factions controlling Tripoli) among others, hope to maintain control.

The dialogue’s failure would present enormous challenges to the international community in terms of regional stability. Key states such as Egypt and Turkey (and their respective allies in the region) would continue to support their proxies in Libya, which would result in militarized escalation. Western leaders, especially those in Europe, would have no unified partner in Libya through which to work with on critical issues such as counter-extremism and the migrant crisis.

The European Union and the United States might find themselves forced to deal with two different Libyas to address such issues of regional and international concern: one in the east, supported by the Libyan National Army led by General Khalifa Haftar, and another in the West, supported by Misrata and the Libyan Muslim Brotherhood. France has already prepared its own strategy for the southern Fezzan region of Libya, entailing a de facto partition that paves the way for the disintegration of the country into smaller states. The EU, France, the United States and other regional players will confront the crisis in Libya in accordance with their own national interests—a disparate series of policy choices unlikely to figure into Libya’s own interest.

Despite Libyan concerns over the current UN-facilitated deal by Bernardino Leon and the United Nations Support Mission in Libya, the alternatives can have catastrophic effects on Libya and its future as a unified state. Hope for Libyans at the moment lies in the formation of a unity government that can stop the downward spiral into insecurity, political paralysis, and fragmentation. The next few weeks will determine the future course of Libya—a course that begins with what Libyans choose for their own country.

Mohamed Eljarh is a Nonresident Fellow for the Atlantic Council’s Rafik Hariri Center for the Middle East.