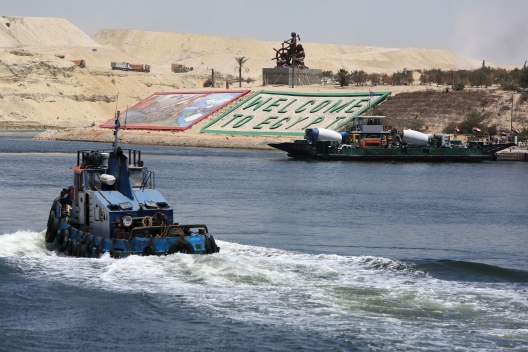 One cannot deny Egyptian President Abdel Fattah al-Sisi’s clear desire to reinvigorate Egypt’s economy after four years of steady weakening due largely to tumultuous political change and ongoing violence. One large project (among many mega projects Sisi has envisioned)—the “New” Suez Canal—has come to fruition two years ahead of schedule on presidential orders. A detailed government press release estimates a near doubling of shipping traffic and a more than doubling of revenues for the government through the public-private development project. As the Egyptian government heavily promotes the $8.2 billion investment in the canal, critics have challenged the government’s numbers and reasoning behind their claims. Yet few have given the Egyptian government the benefit of the doubt, and examined the best-case effect of these claims on the Egyptian economy.

The Egyptian media has publicized the New Suez Canal as a monumental breakthrough; the Ministry of Endowments has equated it to the Muslim conquests of Islam’s golden age; the Suez Canal Authority (SCA) touts its new “gift to the world”; and the cabinet declared the day of its inauguration—Thursday, August 6—a national holiday. The completion of the 37-kilometer bypass to the 193-kilometer channel (extending the already existing 40 percent that allows two-way traffic by 20 percent, Figure 1) would reduce shipping time from 18 to 11 hours, according the SCA. The Egyptian government has enthusiastically espoused the benefits of the canal’s expansion to international trade, including its increased capacity to handle nearly double the traffic (from forty-nine to ninety-seven ships per day), thereby more than doubling Suez Canal receipts for Egypt (from $5.3 billion currently to $13.2 billion by 2023).

Yet some critics argue that global trade—and maritime trade through the Suez Canal in particular—must increase significantly in order to meet these expectations. A year ago, an analyst at a maritime advisory firm explained that macroeconomic trade factors rather than waiting time would determine shipping volume through the Suez. Capital Economics, an independent economic research firm, released a report on August 3, 2015 in which it said, “The government’s projections appear to be based on implausibly optimistic assumptions about world trade and we think the actual benefits are likely to be smaller than the authorities seem to be hoping for.” The report estimated that maritime trade would have to increase by 9 percent in 2023 to meet expectations. It remains unclear, however, that the Suez expansion would provide the incentive needed to double the demand for this shipping route.

Assuming, however, that the government’s predictions in fact come true, how would this major investment affect the Egyptian economy and the wellbeing of Egyptian citizens? Considering that the Egyptian economy’s gross domestic product stands at $286.4 billion for 2014, as estimated by the International Monetary Fund, an increase of $7.9 billion in revenue from the newly improved Suez Canal will add less than 3 percent to overall GDP today and, bearing GDP growth in mind, far less in 2023 when the government expects such revenue to arrive.

Aside from the actual improvement to the canal itself, the Egyptian government has also promoted the Suez Canal Area Development Project (or the SCZone). The new industrial zone aims to develop over 500 square kilometers to provide a “value-added service hub” centered on the canal’s activities. The government claims it will add about 1 million new jobs and support a local economy of about 2 million residents over the next fifteen years. While 1 million new jobs is welcome news for the country’s unemployed, Egypt requires on average 600-700 thousand new jobs annually to absorb a large, young, and growing labor force. The government no doubt hopes that the SCZone would create a knock-on effect, boosting investor confidence in other sectors of the Egyptian economy to help meet this need for employment, but it will not come easily and the work to develop this area has not yet begun.

One area where the additional Suez Canal receipts will have a considerable impact, however, is on Egypt’s foreign exchange reserves. After the 2011 uprising, foreign exchange reserves dropped sharply from $36 billion as tourism evaporated, Egypt became a net importer of fuel, and foreign direct investment disappeared. In the wake of political instability, the government spent much of its reserves to prop up the value of the Egyptian pound. In 2013 and 2014, Egypt recovered some of these reserves, with periodic external financing support from the Gulf states. Since then, the figure has fluctuated between about $15 billion and $20 billion (Figure 2). Saudi Arabia and the United Arab Emirates have both encouraged a sustainable economic recovery for Egypt, suggesting that their support has its limits. Given Egypt’s need for about $6-7 billion a year in external financing to sustain its level of imports and meet its debt obligations (including a recent promise to repay foreign energy companies), the additional $7.9 billion from the Suez Canal would significantly add much needed foreign currency to the Central Bank of Egypt. The fact that the Egyptian government managed to raise the $8.2 billion investment in the Suez Canal project from entirely domestic sources in Egyptian pounds greatly helps in this regard, since all the debt repayments will be in local currency.


The change in Egypt’s foreign exchange reserves in millions ($) since 2010. (Source: Trading Economics.)

Even for those who think the government’s rhetoric is overblown and grandiose, the New Suez Canal has captured the Egyptian imagination and sparked a wave of patriotism. Although this project could lead to some meager gains in employment it will improve the balance of payments position of the country. But there lies a long road to travel for Egypt’s economic recovery with no guarantee that the government’s predictions will come true. The canal only represents a small step along this road as the government works to restore both international and domestic confidence. On its own it will not be enough to achieve Sisi’s vision for the transformation of the Egyptian economy. But it is a good start.