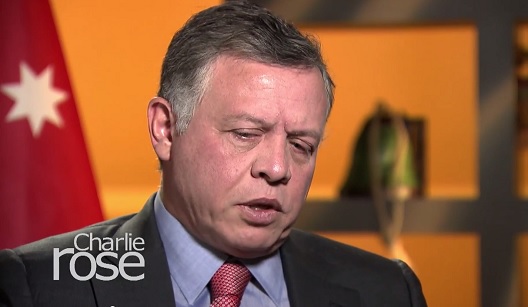 In an exclusive conversation with Charlie Rose, King Abdullah of Jordan talks about his efforts to confront violent extremism. The full interview aired December 5, 2014 on PBS. (Photo: Screenshot/Charlie Rose)

King Abdullah had a forthright conversation with Charlie Rose last Thursday about the need for the Islamic world to take ownership of the task of confronting extremism that has besieged the Middle East. His analysis and general approach to solutions was sensible, with a lot of detail hopefully to be filled in soon, in coordination with other Middle Eastern leaders. However, he got a couple things very wrong.

The King said he had recently told Russian President Vladimir Putin that the fight against extremism is the “third world war by other means.” These are the offhand words of someone who clearly was not around during the last world war, revealing a lack of perspective and scale that is counterproductive in the efforts against extremists, be they Muslim or otherwise. By bandying about such distorted analogies, we give terrorists far too much credit and inadvertently become advertising agencies for them.

First, a note on scale: It would have been helpful if Putin had pointed out to the King that 24 million Soviet citizens died in World War II. A somewhat conservative estimate is that 60 million people around the world died and 25 million were wounded during the six years of World War II. (Conservative because most scholars believe that millions died in China, for example, without being counted.) It is extremely difficult to come up with the number of deaths due to terrorism since 9/11 due to differing definitions of terrorism attached by the people doing the counting. For the United States, with the death of US personnel in Iraq included, the numbers are estimated at around 10, 000, with the total closer to 4,000 if the Iraq casualties are counted as they should be—victims of a war of choice by the United States. Compare that with 19,000 US troops killed in one six-week period at the Battle of the Bulge in 1944. While lives lost from terror attacks are as precious as any other lives, if charted alongside the death toll inflicted by the genuine world wars of the 20th century, they would be virtually invisible.

The use of the world war analogy by the King and the notion of a Global War on Terrorism introduced by the Bush administration would not be so damaging if they only represented a distortion of history. Other impacts of this type of thinking are more pernicious. First, it gives the most marginal groups of violent extremists much more credit than they deserve, elevating them to a status of major combatants against world powers—something they never were and never will be. Second, for many Muslims, not just fringe extremists, the war against terror is seen as a war against Islam and Muslims, largely based on the record of recent US military involvement in the Middle East. The terrorists understand this and characterize themselves as the legitimate defenders against the new Western crusaders. Thus, terms that we use to rally against them mainly serve to burnish the limited credentials of Muslim terrorists.

Another thing that the King gets wrong, and knows better, is the implication that the ideology of Islamic extremism is the principal driver of the current wave of terrorism seen in Iraq, Syria, and elsewhere in the region. Of equal if not more importance, particularly in Iraq, is an old-fashioned struggle for political power. Saddam’s ex-commanders who have joined up with the extremists may talk the talk of radical Islam, but they are essentially at war to get back from what they view as their share of the pie in Iraq. They see Iran and its friends in Iraq and Syria as implacable foes in a zero-sum game, and are thus motivated to fight.

Even individuals from Europe and the United States who have turned to jihad are only partially motivated by Islamic belief or practice, which many of them barely understand and may have only recently adopted. More often, they just want to “do something” when they see slaughter and suffering of civilians in Syria, for example. The point here is a simple one, but often overlooked: it is important to tease out and understand varied motivations of individuals involved in terrorist groups before adopting strategies to influence them.

What the King Got Right and Not Just to Counter Extremism

King Abdullah told Charlie Rose that a “strategic, holistic approach” is needed across the Middle East, that this is a Muslim problem for which Muslims need to “take ownership.” He was correct that addressing the problem has to entail a combined military, security, and ideological approach. He said discussions on how to effect such a strategy were underway at high levels within the region and with the United States.

The underlying reality is that such a holistic approach is necessary not only to deter terrorism; it is needed for the Middle East to move forward. Syria, Iraq, Yemen, Libya are all failed states in some form, and many other of the “stable, secure” states in the region are built on foundations of sand, motivated to act now by fear for their very existence if the turmoil continues.

Questions for a Strategy

King Abdullah is correct that this will be a generational challenge. The strategy will need to answer some tough questions if it is to have any chance of success:

Retired US Ambassador Richard LeBaron is a non-resident senior fellow at the Atlantic Council. He was the founding director of the US Center for Strategic Counterterrorism Communications.