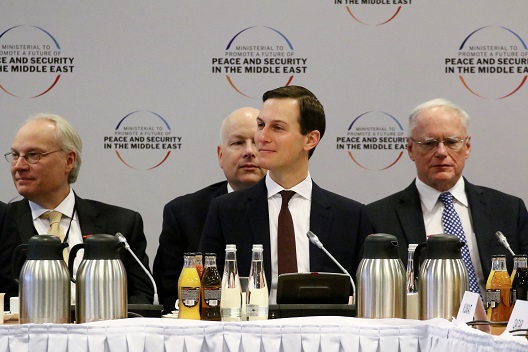 On May 19, The White House announced a “Peace to Prosperity” workshop to be held in Bahrain June 25-26 as the first step in its plan for peace between Israelis and Palestinians. The meeting was described as “a pivotal opportunity to convene government, civil society, and business leaders to share ideas, discuss strategies, and galvanize support for potential economic investments and initiatives that could be made possible by a peace agreement.”

Much like previous administrations, the new team pursuing peace in the Middle East, led by White House adviser Jared Kushner, believes efforts by their predecessors were misguided and fresh approaches are needed. But it is unclear whether the Trump team is under the impression that their workshop to underpin peace prospects with economic support is something new in the annals of recent Middle East peacemaking efforts. It certainly is not; the differences in approach lie elsewhere.

Since the 1991 Madrid Peace Conference, American administrations have promoted a vast array of schemes to support economic development and other positive change in the region, with virtually all of them involving participation from Arab states. These efforts rested on two propositions: 1) Israelis needed to see some “normalization” of their relations with Arab neighbors as evidence of the durability of any peace agreements that might be reached with them, and 2) Palestinians needed immediate assistance as well as some idea of an economic future for their eventual state. To this end, shortly after the Madrid Conference, the Multilateral Peace Process was launched, with working groups on economic development, refugees, water, the environment and arms control. The groups met regularly all over the world for discussions and development of modest cooperative projects for several years. Arab states participated actively—Bahrain hosted a meeting of the environment group in 1994.

The Clinton Administration, also desiring to distinguish itself from its predecessors, added another set of multilateral events in the form of four Middle East/North Africa Economic Conferences between 1994 and 1997. These met in Casablanca, Amman, Cairo, and Doha which resulted in plans for a MENA development bank, a regional tourism promotion authority, and a regional business council. These institutions never got off the ground after the failure of bilateral Israeli/Palestinian negotiations in 2001 at Taba, Egypt.

Accompanying these multilateral efforts, were constant meetings to promote assistance for the Palestinians. One of the few remaining mechanisms of that period is ironically named the Ad Hoc Liaison Committee. It still brings together international partners to raise money for Palestinian projects, urge economic reforms by the Palestinians, and draw attention to Israeli-imposed restrictions on Palestinian economic development.

The type of economic support workshop planned for Bahrain is only new for the Trump administration participants. The potential Arab and Israeli participants have seen these efforts come and go. The Arabs were active participants as long as they could see that genuine efforts were underway to make progress in bilateral negotiations.

So, what is new about the Trump administration approach? The fundamental difference between this group and its predecessors is that the prior efforts were seen primarily as confidence building for bilateral peace agreements between Israelis and Palestinians, which would result in a Palestinian state. Kushner and his colleagues won’t even use the term “two state solution,” which was the mantra of all US negotiators in the past.

The Trump team also differs in its approach to the two parties. On the one hand, it has taken punitive steps against the Palestinians, such as cutting aid, while at the same time granting the Israelis concessions that even the Israelis were convinced would be part of the outcome of bilateral negotiations—moving the US Embassy to Jerusalem and recognizing Jerusalem as Israel’s capital.

In past efforts, the US was seen as the “honest broker.” That did not mean that it treated Israeli and Palestinian leaders or interests in a balanced, neutral manner. That was never the case. Israel has always had access to Washington’s policymakers and their plans in a way that the Palestinians could never imagine. In fact, the close US/Israel relationship was precisely the reason the Palestinians and Arab states trusted Washington as a broker. They reasoned that eventually the United States had the political influence and the resources to convince Israel to make difficult concessions leading to a lasting peace.

While the level of its involvement in negotiations ebbed and flowed, the United States consistently insisted that in the end, the two parties themselves had to come to agreement on the terms of peace—nothing would be imposed. The US was not at the negotiating table for either the 1994 Israel-Jordan peace treaty or the 1993 Oslo Accords. The Palestinian track of the peace process faltered for many reasons, but Kushner and his colleagues cannot be blamed for believing that a fresh approach is called for. However, it is difficult to envision how painting rosy pictures of potential Palestinian economic development resulting from peace will convince the Palestinians that this administration can help achieve a just agreement. And it is likely that they would shun the title of honest broker for Kushner and his colleagues, given the consistent approach of rewarding Israel and punishing Palestinians.

Based on the last twenty-eight years of experience in promoting peace between Israel and its neighbors, the elements for success have not likely changed much. The evidence indicates that the critical elements are, in priority order: strong courageous leadership on both the Israeli and Arab sides; quiet direct negotiations between the two sides; and, consistent diplomatic and material support by the United States and a large number of countries and international institutions.

Perhaps the Trump team is well aware that these conditions are indeed required but currently absent, and is merely going through the motions in order to be able to say that they tried. Their focus so far has been on consolidating support for Israel and there is little reason to believe that a workshop in Bahrain will spark a dynamic that encourages the two sides to tackle and solve their longstanding political differences.

Ambassador Richard LeBaron is a Non-Resident Senior Fellow at the Rafik Hariri Center for the Middle East. He served in Israel and Arab countries, and held various leadership roles in the Middle East multilateral negotiations in the 1990s.