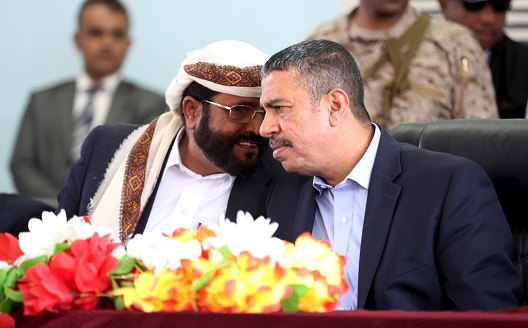 Yemeni President Abdrabbo Mansour Hadi’s seemingly sudden reshuffle in the Yemeni government on Sunday raised a number of questions surrounding his motivation while underlining the difficult road ahead if Yemen’s war is to end in the next few months. Hadi sacked Khaled Bahah, who served as both Vice President and Prime Minister, just one week before the scheduled ceasefire on April 10. Hadi gave the positions to two people: northerner and General Ali Mohsen al-Ahmar rose to Vice President from his current position as Deputy Chief Commander of the Armed Forces, a position he assumed February 23. Ahmed bin Dagher, a southerner and former Secretary General of the General People’s Congress (GPC), was appointed Prime Minister.

Both held prominent positions in former president Ali Abdullah Saleh’s circles. Ali Mohsen had defended Saleh’s regime from its early days and through its wars with the Houthis in the 2000s until he turned against Saleh during Yemen’s uprising in 2011. Bin Dagher had left Yemen in exile in 1994 as a leader of the Yemeni Socialist Party, which fought against Saleh in the 1994 civil war. Saleh pardoned him and Bin Dagher became the then-president’s supporter and member of the GPC upon his return. Last fall, he shifted his allegiance to Riyadh, along with other members of the GCP, who claim that they represent and control the party from outside Yemen.

The timing of Bahah’s dismissal came as a surprise, but the tensions between him and Hadi were widely known. In December 2015, Bahah called a cabinet reshuffle by Hadi illegitimate because he had not been consulted. In dismissing Bahah this week, Hadi chastised Bahah for his “failure” in restoring security, the economy, and public services (how he was supposed to improve services amid a war is unclear). A source told the London-based news site The New Arab that the decision was probably not a rogue move on Hadi’s part, but came in “close consultation” with Riyadh.

Responding to his dismissal on his Facebook page, Bahah took the high road and restrained from lashing back at Hadi. He said that he had worked sincerely to help his beloved Yemen and wished it to be relieved of its suffering so that Yemenis might realize a better future.

Last month, the Houthis and Saudi Arabia announced that they had reached an agreement on a ceasefire and plan to resume peace talks on April 18 in Kuwait. The agreement came as a surprise but made good sense for both the Saudis and the Houthis. The Saudis need an escape plan from the war in Yemen, which threatens to become the kingdom’s Vietnam. The Houthis, while still strong in the north, are clearly (if slowly) losing ground to the Saudi-led coalition.

Over the past months, talk in diplomatic circles suggested that Riyadh might be willing to replace Hadi with someone more respected inside of Yemen. Bahah’s name was among those most mentioned, which surely caught Hadi’s attention. But Riyadh has not abandoned Hadi just yet. Sacking Bahah may have been Hadi’s attempt to sideline a competitor while pulling together a strong leadership better suited uniting Yemen if and when the war finally ends.

Hadi’s support inside of Yemen comes from a range of groups that share his interest in pushing back the Houthis. But that support is weak, and efforts to suggest otherwise are met by Yemenis with incredulity. Following Bahah’s dismissal, Al Jazeera English reported that ten Yemeni parties had signed a statement supporting the reshuffle. The “Southern Movement” is listed as one of the signatories of the statement, but there is no such united movement. One diplomat estimated that the Hirak had as many as 300 factions in Aden alone. Yemen analysist Adam Baron notes that there remains hardly any group in Yemen—political party, tribal grouping, or alliance—that is not riven by internal factions and power struggles. For those reasons, statements in which whole parties make a unified statement, like the one endorsing Bahah’s dismissal, are almost laughable.

To be sure, some leaders of the Hirak, or Southern Movement, appear to endorse the reshuffle in a statement published in southern news source Hadramout.net. The statement expressed “appreciation and profound gratitude” to the Saudi-led coalition, a fawning tone that is not reflective of many southern voices. Like the statement reported in Al Jazeera, this statement suggests that the Saudi-led coalition is popular and implies that Hadi commands the loyalty of a wide and diverse set of Yemeni political actors, neither which is the case. Indeed, plenty of southerners have publicly criticized Hadi and his dismissal of Bahah. Some even argue that they would prefer Saleh’s return to having Ali Mohsen as second in command.

While Hadi’s appointment of Bin Dagher as Prime Minister may be an offering to southerners, promoting Ali Mohsen to Vice President seems the more significant political move. It puts a military leader into a prominent political position—second in line to rule should something happen to Hadi—and one who still commands respect (and fear) among many northern tribal leaders. Hadi may get rid of a rival in Bahah, who many described as being a more capable leader with a stronger domestic support base. But the Saudi-backed move may signal the end of his political career in the longer run. By promoting the general, Hadi and Saudi Arabia hope that he can bring northern tribes over to the Saudi-coalition side. The move may be the strongest indication yet that Riyadh’s plan for Yemen no longer centers on defeating the Houthis per se, but on restoring a military ruler with Saudi sponsorship. The United States does not like Ali Mohsen, particularly given his ties to northern jihadi groups. If President Barack Obama prefers a stable coalition to a long-term civil war in which jihadists emerge as the only winners, it is unclear that jihadis would be losers if Ali Mohsen were to come to power. The political calculation assumes that war will continue in Yemen unless a leader can bring strong northern tribal leaders from both tribal groupings to the table. Ali Mohsen is far more likely to accomplish that difficult task than Hadi, but would face as many challenges as Hadi in uniting all of Yemen peacefully.

As the major political actors scramble to bet on which side will emerge from the war victorious, the ordinary people in Yemen continue to suffer. It is citizens’ desire for a new Yemen that may be sacrificed as external powers—notably Saudi Arabia and the United States—push for whatever outcome suits their own interests rather than those of the Yemeni people.

Image: Yemen's Vice President and Prime Minister Khaled Bahah (R) listens to the governor of the northern province of Marib Sultan al-Arada during a meeting with local officials in Marib November 22, 2015. (Reuters)