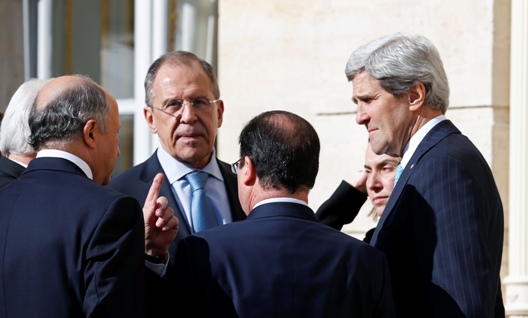 As outrageous and unsettling as Moscow’s invasion of Ukraine is, the fact remains that the real killing continues to take place in another area of Russian interest: Syria. Indeed, more than a quarter of the 136,000 Syrians killed in the war have died over the past five months alone. In a tragic irony, one of the most intensive bursts of lethality—thanks to stepped up aerial bombardment by the Assad regime—took place during the recent, short-lived Geneva peace talks. Whatever Russia’s professed interest in the diplomatic track for Syria, the results at the peace table were abysmal. The question now is whether Moscow’s designs on Ukraine have changed anything with respect to the three-year old conflict in Syria and the massive suffering and instability that it has spawned.

There are two distinct possibilities: The first is that Russian President Vladimir Putin’s decision to send troops to Crimea—after having earlier spoken to President Barack Obama in a conversation that the White House termed “constructive”—has finally shredded any remaining hopes the administration may have held for diplomatic cooperation on Syria. Putin’s sandbagging of the US President on Ukraine, came on the heels of months of apparent duplicity from Foreign Minister Sergei Lavrov who failed utterly to live up to supposed signals of seriousness over a transition in Syria. Under this theory, both President Obama and Secretary of State John Kerry are now thoroughly disabused of the value of investing in anything that the Russians might promise on Syria, and might now consider new policy options.

At the same time, there is an alternate, skeptical view of the implications from Ukraine. However peeved the Obama administration might be at Russian perfidy in Ukraine, and however disappointed in the Geneva parley, the famously dispassionate Obama remains skeptical of any alternate course of action in Syria. Diplomacy with Russia, while frustrating, will remain the mainstay of policy along with humanitarian assistance. Indeed, some might see Russia’s gambit in Ukraine—with the attendant possibility of international isolation and unknown complications on the ground—as making Moscow more pliable on Syria. Support for this view comes in the form of the recently passed UN Security Council Resolution 2139, in which Russia finally joined with the United States and its allies to, at least rhetorically, call out the Assad regime on the worst of its humanitarian abuses and demand action. Under this theory, Russia’s need to focus on Ukraine prompted Moscow to relent a bit on its reflexive defense of Assad’s indefensible actions against his people.

Rather than conjecturing over which interpretation is correct, a better approach is to move swiftly, while the situation in Ukraine is at its most uncertain, to test Russia’s actual position on Syria. Even if the Obama administration is wedded to diplomacy with Russia, it might as well maximize whatever prospects there are (which may prove minimal) to exact Russian cooperation on Syria, simultaneously forcing Moscow to show its true cards. President Obama has already acknowledged that the diplomatic track is not working, so there is little risk for even a highly risk-averse White House in actively testing the Russians.

There are several different avenues for Washington to exploit along these lines, beginning with the UN Security Council. Under the just-passed resolution 2139, the secretary-general is to report back to the Council on compliance in the third week of this month. Now is the time for the US delegation—seizing information from the ground on the continuing sieges of Syrian towns—to work with partners on a companion resolution with real teeth. Once Secretary-General Ban Ki-moon reports on the continuing obstruction of humanitarian access, the United States and its partners on the Council should be ready to table a new resolution under Chapter VII. Russia, with Chinese support, may well veto the resolution. In this case, allies like France and the United Kingdom (which are full parties to the treaty establishing the International Criminal Court) can, with US support, initiate a move to refer named persons in the Assad regime to the ICC for violations of international humanitarian law and the laws of war. In the worst case, Russia’s charade of supporting international humanitarian efforts will be exposed, while at least some in Damascus will start getting the signal that there is mounting—individualized—attention to the regime’s brutality.

The upcoming Secretary-General’s report on compliance with the provisions of Resolution 2139 should also mark the point when the White House unleashes its representative to the UN to make a full-throated, continuous effort to assail the Assad regime’s deliberate targeting of civilians. For sure, the State Department has not been reticent about calling out Damascus for its outrages, most recently in the State Department’s Annual Human Rights Report. However, recent messaging from the White House has muddied the narrative; labeling the situation a “horrific civil war” implies that all sides share relatively equal culpability. Much as Madeline Albright did when the UN tried to peddle that narrative during the war in Bosnia, so the US mission to the UN should press the Russians on their decidedly misleading narrative over who is responsible for the vast majority of the suffering.

Now, especially while Russia is embroiled in defense of its actions in Ukraine, is also the time to formally call out the Assad regime for noncompliance with its chemical weapons obligations. The regime has fallen way off schedule, delivering only about a fraction of the banned chemical agent for destruction and dragging its feet on destroying facilities. Moscow has consistently backed the regime in its transparent evasions, asserting (without credible evidence) that mounting delays are due to opposition attacks. It is time to press Moscow on its dubious defense of the regime. Under the wording of Resolution 2118, there is no formal requirement to wait for a finding of noncompliance by the Organization for the Prohibition of Chemical Weapons in order to raise the subject, and then press for the stipulated Chapter VII authority.

Washington can also turn the tables on Moscow in the Security Council in one other respect—by seeking Chinese cooperation. Beijing has distance itself from Russia’s imbroglio in Ukraine, neither joining the West in condemnation nor backing what is, after all, an invasion of a sovereign country for alleged humanitarian reasons—something that China abhors. With Russia vulnerable on Ukraine, the door might be open to a deal with Beijing on Syria, on a resolution or at least a presidential statement that calls out Damascus for noncompliance on chemical weapons.

Moving from the corridors of diplomacy to the volatile situation in and around Syria, there is at least one step that Washington can take to squeeze Russia at once on both Syria and Ukraine. As part of on-going, intensive negotiations over the Ukraine crisis, NATO can approach Turkey over reinforcing the alliance’s presence near the border with Syria. Turkey occupies a unique role in both crises, at once having a major Black Sea presence not far from Crimea and a volatile border with Syria in the south. At present, six NATO missile batteries are deployed in southern Turkey to augment Ankara’s air defense capabilities. Reinforcing these batteries either in number or by adding additional assets that Turkey might find useful, will send an unmistakable signal to Moscow of alliance resolve.

Whatever transpires in Ukraine, the crisis there has opened up an unprecedented opportunity to test Russian willingness to cooperate on the far more lethal situation in Syria. Should Moscow fail the test, then at least the US and its allies can address the situation in Syria unburdened by illusions or novel theories.

Edward P. Joseph is a Senior Fellow with the Johns Hopkins School of Advanced International Studies.