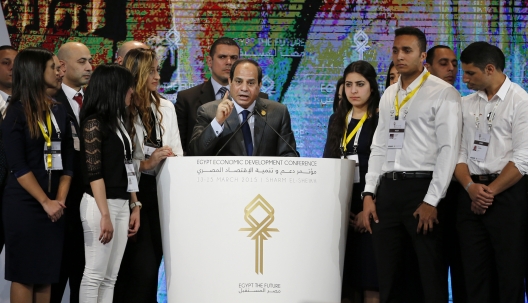 Prior to Egypt’s Economic Development Conference, Investment Minister Ashraf Salman had said Egypt expects to sign agreements worth up to $20 billion at the summit. With the conference coming to a close on Sunday, Salman revealed the final figures coming out of the summit. According to Salman, Egypt signed deals worth a total $38.2 billion, in addition to $12.5 billion pledged by four Gulf countries. This figure includes investment deals worth $33 billion, and European aid and loans worth $5.2 billion. At least $18.6 billion of the agreements are going towards engineering, procurement, and construction projects, according to Prime Minister Ibrahim Mahlab.  Salman added that Egypt signed MOUs for potential deals worth $92 billion. Find out more about the specific agreements below.

The Gulf countries alone pledged $12.5 billion in financial aid and investments during the conference.

Agreements signed in oil, gas and mining sectors have been valued at a total of $23.5 billion.

MOUs worth around $22 billion were signed by Egypt’s Electricity Minister,

Egypt’s housing minister signed four memoranda of understanding worth a total of $13.5 billion to develop real estate and tourism projects on the outskirts of Cairo.

Egypt signed six agreements for logistics and transportation projects worth a total of $2.2 billion.