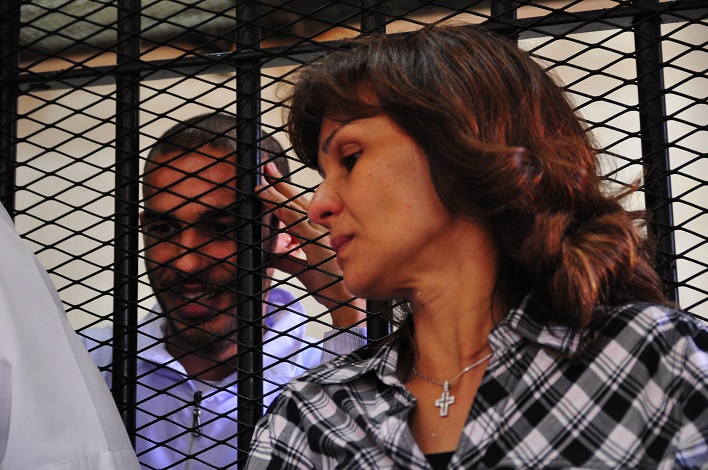 Alber Saber’s case may seem no different from other religious defamation trials that we have come to know about through the media. At the heart of it, however, this is not really a case about religious defamation, but rather is a personal attack during which religion happened to be defamed.

According to a letter Alber wrote from prison, someone, the name of whom Alber refuses to divulge, impugned him. The provocation began after this unnamed person posted claims online that Alber was the creator of the inflammatory video “The Innocence of Muslims.” This prompted a mob to gather at Alber’s home, yelling insults and throwing objects at the building. As the numbers increased, they tried to break into his house, at which point Alber’s mother called the police, who on their arrival, arrested Alber and not the attackers.

The police in Egypt are a service that work for the benefit of the powerful. All Egyptians know this. Therefore, in cases such as religious defamation, don’t ever call the police. Instead, try to look for protection among neighborhood youth, even if the situation necessitates that you pay them protection money. If Alber had not called the police, but rather had tried to enlist the help of a local gang (baltagiyya) for protection, they would have been able to stop the provocateur and the ordeal would have ended. But, unfortunately, Alber did not take this path, preferring to hold close to ideals and lofty values to the point that he still refuses to divulge the name of the person who sparked the whole incident.

The Egyptian police force is the only entity in the entire state that does not indulge in confessionalism or have religious leanings regarding its personnel. In the end, the chief of police is always ready to serve the most powerful party. And if bad luck has it that you are a member of the weaker party, then don’t expect to be treated with even a modicum of justice or for that matter according to standard legal procedures; and be ready for the worst if you can’t bribe or curry the favor of the security officer assigned to you.

3.      Equality: The Missing Value in the Egyptian Judicial System

If we take a quick look at Egyptian legislative history with the ushering in of the modern state at the beginning of the 19th century to present day, we will find that stability, the preservation of identity and social values, tranquility, and a dubious co-existence between its constituent groups count as the most important values. Together, these elements make up the foundation of Egypt’s legislation and constitutions.

Here, we might be able to discern easily this very same point in the current debate surrounding the draft constitution, in so far as popular opinion among the various sides hold that freedom of belief should be limited to the three major monotheistic faiths, or how Sunni Islam should be chosen as the most accurate factor in defining the identity of the state under the pretense of preserving national identity and the values of an upright society.

Thus, it seems only natural that Alber should be arrested and placed in a cell filled with insects and that he should be given food unfit for human consumption, whereas Abu Islam – who announced that he had urinated on and burned the Bible – lives free and appears in television, and continues to curse and verbally attack people. Despite the fact that Alber and Abu Islam face the same accusation, because Abu Islam is a Muslim and Alber is a Christian, the latter gets put behind bars whereas the former is left free as a bird.

Therefore, there is no way one can have faith in the Egyptian judicial system, especially when it comes to cases on freedom of opinion and expression. It would be a surprise if your own trial were held in front of a judge in whom there still rests some semblance of intelligence or understanding about justice; but this is only the exception and not the rule. If you were accused one day, don’t ever submit yourself to this rigged system.

4.      Whoever Runs from Battle Is Crushed by the Crowd

It is important that we continue to encourage people to come out for the sake of achieving greater strides in the fight for freedom of belief, freedom of opinion and of expression in the coming constitution, in addition to the abrogation of legislation that limits those laws. But during this battle, we must always remember that laws in Egypt are not worth more than the paper they’re written on.

The most important element in this battle still hangs in the general social void.

It does not make sense, for example, that a miracle has to occur for a judge to declare Alber innocent. The Egyptian press – which claims to be liberal – will still continue its biased coverage against Alber and against freedom of opinion and of belief.

The widest field in these battles is society itself. The most egregious nonsense and the ultimate lie is the argument that the battle with Egyptian society should be postponed under the pretext that the political situation is unsuitable, and that battles for and defending cases like Alber damage the civil society movement and impede political wins.

The political parties that will not defend or stand with Alber, with freedom of expression and freedom of belief, are no different than the other fundamentalist and reactionary parties. If they do not wake up now and stand with Alber, they will be crushed by the swarming crowd of ignorance and rising wave of fascism within the Egyptian judicial establishment and the Islamist parties.

Ahmed Naje, a writer and journalist, works as an editor in the literary weekly Akhbar al-Adab.