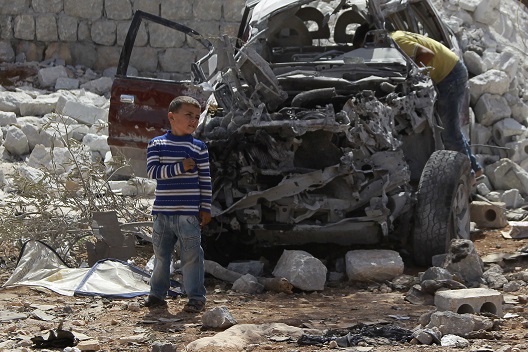 Last week, Syria’s mainstream opposition suffered a major defeat in its heartland of Idlib province, northern Syria. The al-Qaeda-aligned Jabhat al-Nusra (JAN) captured several key towns from the US-backed Syrian Revolutionaries Front and Harakat al Hazm, with some fighters defecting to JAN. Media reports have called this as a ‘blow’ or ‘setback’ to US policy—that ostensibly aims to build up Syria’s moderate opposition. But the disaster in Idlib is in fact the direct result of a US policy that has ignored the strategic reality of Syria’s war, in pursuit of a narrow, misconstrued counterterrorism campaign.

From the start, the US-led air campaign in Syria—and the accompanying chorus of official statements—have endangered Syrian moderates. US airstrikes on JAN positions (including in Idlib) in the campaign’s opening days were an early indication that actual US policy was directly at odds with claimed US support for the nationalist opposition. While JAN is a US-designated terrorist group, it is also a potent actor in the beleaguered anti-regime insurgency that has received little US support. Relations between JAN and the mainstream insurgency had varied from hostility to uneasy cooperation against ISIS and the regime. Because the moderates are aligned with the United States, US airstrikes on JAN immediately produced a new and powerful rival to already vulnerable moderate forces. By striking JAN without sufficiently strengthening its moderate counterparts first and promising (publicly, no less) to use them to fight JAN and not the regime, the United States made the opposition appear just threatening enough to provoke JAN, but not so threatening as to deter the jihadist group. The results are on clear display in Idlib.

Syrian moderates, caught between the regime and the Islamic State in Iraq and al-Sham (ISIS) and enjoying only modest US support, were in no position to take on JAN even if they wanted to. Indeed, repeated US official statements insisted it would take over a year to effectively arm and train the mainstream opposition—clearly signaling to JAN that the sooner it attacks the United States’ hapless allies, the better. It is yet unclear why the United States provoked a jihadist attack on friendly forces it conceded were unprepared for a fight.

Although the United States encouraged moderates to fight JAN, it did little to help them take territory or draw popular support away from the jihadists. In fact, US policy has repeatedly undermined its ostensible allies. The United States has apparently refused to coordinate military action against ISIS or even share intelligence with rebels that had fought ISIS for far longer and with arguably greater success than the US military. At the same time, US-led airstrikes have inevitably killed dozens of Syrian civilians. While moderate rebels say they can tolerate the casualties if the air campaign weakens the regime, in isolation these deaths seriously undermine US-aligned rebel groups in the eyes of Syrians.  Indeed, US officials have also made clear that a regime that has been bombing, starving, and gassing Syrians for years would at best be a tertiary target of the opposition’s train-and-equip program. Asked whether US-trained opposition forces would fight the regime in addition to the jihadists—they can hardly succeed against one while ignoring the other—General John Allen, who leads the anti-ISIS effort, replied: ‘No.’

In other words: the United States wants its allies in Syria to fight its enemies, but not their own, and will not even give them the military support to do so effectively.

Unnamed US officials have also insisted that rebel forces would be trained to defend but not take territory from ISIS. Leaving aside the inherent strategic and operational absurdity, this is hardly a strong US endorsement of the mainstream opposition. Nor does it indicate any US readiness to strengthen the moderates enough to defeat the powerful extremist groups whom they are supposed to fight, including JAN (to say nothing of the more powerful Syrian regime). If the United States cares so little for the opposition’s safety and thinks so little of its capability, perhaps the Syrian fighters routed in Idlib were wise to defect to JAN, if only for their own survival.

No one should be surprised by JAN’s success and the moderates’ defeat in Idlib, or portray it as an unexpected setback. For weeks, US actions and statements telegraphed to JAN that its best interests lie in moving quickly against its moderate rivals, before they received enough US support to pose an actual threat. In addition to ISIS and the regime, our ostensible allies can now count among their rivals one of Syria’s most formidable militant groups. Had the United States seriously and meaningfully supported the mainstream rebels, this would not necessarily be a bad thing. As it stands, the United States appears to have done everything in its power to condemn Syria’s moderate opposition to failure, while ensuring its jihadist opponents succeed.

Image: Boys inspect a vehicle which was damaged in what activists say was one of Tuesday's U.S. air strikes in Kfredrian, Idlib province September 24, 2014. The United States and its Arab allies bombed Syria for the first time on September 23, killing scores of Islamic State fighters and members of a separate al-Qaeda-linked Khorasan group, opening a new front against militants by joining Syria's three-year-old civil war. (Photo: Reuters)