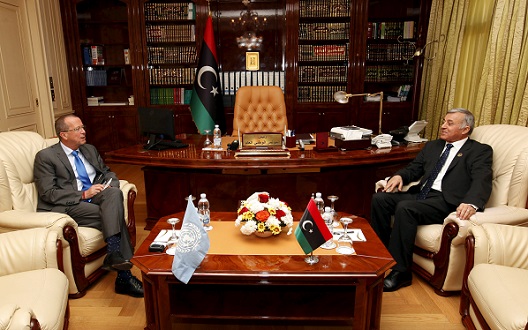 After a long and difficult journey in the Libyan political minefield that deeply affected both his mission and reputation, UN Special Representative to Libya Bernardino Leon left his post and has been replaced by the newly appointed envoy Martin Kobler on November 17. Leon’s legacy leaves neither a signed agreement between Libyan participants to the dialogue, nor the formation of a government of national accord. What went wrong?

To begin with, was this a truly Libyan dialogue? Examining the negotiations through the composition of its participants—which even included militia leaders and politicians with ties to militias disguised as political parties—the answer is yes. But while Libyan parties to the talks actively exchanged points of view and provided proposals for a comprehensive agreement, the Tunis-based UN Support Mission in Libya (UNSMIL) exclusively determined and facilitated the participants, setting, and content. Libyan participants and experts did not take part in the drafting process. One draft after another of the peace agreement would appear, often surprising participants and drawing loud voices of dissent from the Libyan public. The Benghazi demonstration against Leon’s last draft agreement and candidate selections for the Government of National Accord (GNA) last month showed that he and his team operated in a parallel reality to that of the Libyan reality on the ground. UNSMIL’s choice of language and ideas often highlighted this disconnect.

With regard to the proposed Presidential Council, the dismissal of the need for rigorous regional balance in its membership—especially between the East and the West—conveyed either ignorance or arrogance, perhaps both. Tailoring certain articles to ensure Libyan Army Commander General Khalifa Haftar’s position was also a premature calculation. The inclusion of controversial rhetoric in the UN draft agreement, such as “revolutionaries to whom the Libyan people will always owe a debt for the part they played in the country’s liberation from decades of autocratic rule” among others, undermined the language of peace. Finally, including the clause “Islamic Sharia is the source of all legislation, and that all that contradict it shall be deemed null and void” within the governing principles demonstrated a profound lack of understanding on the issue. It also appeared geared toward appeasing one party to the dialogue on an issue that remains the subject of an ongoing debate within the Libyan Constituent Drafting Assembly and Libyan society. While invaluable as mediator to reach consensus, Leon committed a grave error in keeping Libyans out of the drafting process.

The Libyan dialogue aimed to produce a roadmap that would govern the remaining and final stage of the transitional period, culminating with the adoption of a Libyan constitution by the elected Constituent Drafting Assembly. Yet the constant and unanticipated changes to the various iterations of the agreement prevented the process from reaching its goal. Leon’s team issued eight drafts of the agreement, each containing substantial changes from the previous one. He repeatedly declared that each version was to be the last, only to renege. The indecision created confusion among Libyans and stripped the document and the process of any credibility. UNSMIL’s changes appeared aimed at placating one side of the conflict, which compromised the perception of the UN as an objective actor. By the time the agreement went through its eighth iteration, the draft had lost the substance and weight vested in the first four versions, which were initialed by all participants except the members of the Tripoli-based General National Congress (GNC). Subsequent changes to the draft revealed UNSMIL’s clear inclination towards the sole party who refused to sign. Unfortunately, UNSMIL’s lack of commitment to principle and professionalism eroded support for the plan, which had evolved into something quite different from the initialed version that the parties involved found the most acceptable.

When it became clear that it would face great difficulty in finalizing and signing an agreement, UNSMIL prematurely turned to forming the GNA and suggested candidates for specific roles. Originally, the GNA would emerge out of a signed agreement. UNSMIL’s misguided shift in strategy nearly derailed its own efforts. UNSMIL’s draft of a plan for Libya was flawed and faced enough challenges, but its selection of candidates for key leadership roles in the new government and other new institutions—some of whom were highly controversial—was nothing short of reckless. The Libyan public balked, construing it as a blatant interference in the new government’s affairs. UNSMIL had simply gone too far.

Leon and his team exerted tremendous effort to bring an end to the Libyan conflict through peaceful dialogue. Nonetheless, identifying what went wrong in both substance and tactics could prevent the newly appointed UN Libya Envoy Martin Kobler from making the same mistakes. If the UN hopes to salvage the dialogue process, it must redouble its efforts on the draft agreement, involve Libyan experts in the drafting process, and produce one solid draft as soon as possible with either the simultaneous formation of a GNA or immediately following the adoption of the agreement—lest it risk a collapse of the consensus built thus far.

With the expansion of the GNA membership and its increased security role, serious consideration should be given to shrinking the duties of other governing institutions roles such as the State Council and the Parliament. As a check on the GNA’s authority, the rules mandating that the Council and Parliament reach consensus should be relaxed to avoid political gridlock. The international engagement section of the agreement should also be reviewed to upgrade “political engagement” (assistance conditioned on political benchmarks) to “legal engagement” (a guarantee of bi- or multilateral cooperation) with the role and responsibilities of the international community and UN Security Council clearly outlined. Libya needs urgent international cooperation, not just international assistance.

The goal of drafting a peace agreement is not to cosmetically finalize it on paper and obtain the signatures of the warring stakeholders in an artificial show. It requires implementation of its terms on the ground, protection from external challenges, and insulation from becoming the source of conflict. The painful, year-long process of dialogue and shuttle diplomacy to hammer out a feasible plan should not be erased by the recent media scandal and allegations surrounding Bernardino Leon. Libya and UNSMIL can revive the progress achieved thus far and redouble its efforts into reaching an agreement and strategy for its implementation that will end the chaos and conflict. This will serve as the necessary, game-changing first step towards achieving the aspirations of the Libyan people and people of the region to live in peace, security, and harmony.