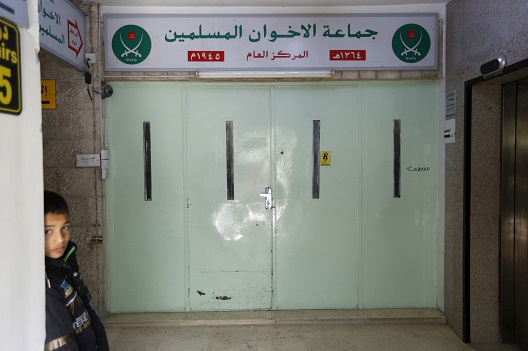 Photo: A boy who stands near the main entrance of the Muslim Brotherhood's office in Amman, after it was shut by police acting on orders of the Amman governor April 13, 2016. REUTERS/Muhammad Hamed

The Trump administration does not fail to disappoint those that expected a raucous and riotous White House. It has only been a few weeks since President Donald Trump took office, and already his tenure is connected with scandals and resignations. Against the backdrop of that, nevertheless, two policies in particular have attracted a particular amount of attention from the DC policy community. The first is the now infamous ‘Muslim-Ban’ which is still the subject of some controversy. The second is being mooted within certain parts of the administration; designating the Muslim Brotherhood as a terrorist group.

The Muslim Brotherhood (MB) at its origin in 1928 Egypt was the politicisation of a certain type of Muslim modernism, “Modernist Salafism,” which strongly influenced Hasan al-Banna, the founder of the Muslim Brotherhood. Both the movement of ‘Modernist Salafism,’ and al-Banna himself, were deeply controversial within the wider Muslim religious establishments of their day. To blithely describe either as simply ‘political Islam’ is to reduce all expressions of Islam in the public arena to this Brotherhood type of Islamism, and also imbues both ‘Modernist Salafism’ and the Brotherhood with a religious authenticity that was disputed by the religious establishment of their day.

That was the Brotherhood in 1928. Almost 90 years later, the Brotherhood is no longer one movement at all. Within the Muslim Brotherhood of Egypt, between 1928 and 2013, at least four different trends emerged, which I go into in my book “A Revolution Undone,” and which Ibrahim al-Houdaiby, a former Brotherhood figure and now Brotherhood-critic at Columbia University, has usefully and insightfully summarised in different works. Those trends had different levels of popularity within the organisation, depending on the time period that we are looking at. From 2014 onwards, there is at least one more trend that emerged, and possibly two – more radical and extreme than what previously existed.

In 1928, there was one Muslim Brotherhood, and it existed only in Egypt. In 2017, there are probably, at least functionally speaking, two Brotherhood groups of Egypt, and several official branches of the group that exist in many other countries, whether in Libya, Jordan, Palestine, or elsewhere. There are also other groups that exist that claim to be influenced by the group’s ideological heritage, such as in Tunisia, but other influences exist within them as well.

Against the backdrop of this long history, there are perhaps four types of approaches towards the group among Western policy makers and analysts. To varying degrees, each is now vying for prominence.

The first, which one might term as the ‘must-designate’ camp, is keen to see the Muslim Brotherhood en masse be designated as a terrorist organisation. Essentially, that camp is made up of populist far-right writers and commentators – a sector of society that up until recently would have been rather marginalised from formal politics and policy circles. With the Trump presidency, and the entry into the White House by the likes of Steve Bannon from Breitbart, this is no longer the case. The Trump administration has more than a few representatives from what is now politely described as the ‘alt-right’. Within the ‘designate’ camp in the Western world, there are others who would not be from the far-right, but who nonetheless consider the Brotherhood to be worthy of designation. It is unclear if Secretary of State Rex Tillerson genuinely falls into this category or not, but his mentioning of the Brotherhood alongside al-Qa’eda in his Senate confirmation hearings indicates that he very well may support designation. As far as this camp is concerned, the Brotherhood is essentially a gateway to ISIL – even though ISIL has described the Brotherhood as an ‘apostate organisation.’

The second group might be termed as the ‘reprehensible-but-tolerate’ camp. Most of this camp would come from the right-wing of American politics and the more conservative parts of the DC Beltway analytical world. For this camp, the Muslim Brotherhood is essentially a religious hate group; it promotes sectarianism, incitement to violence, and is detestable for a litany of reasons. Any participation in democratic processes is derided as merely pragmatic politics, without any genuine or normative respect for pluralism. Nevertheless, this camp generally rejects designation of the Muslim Brotherhood as a whole, because it assesses that the legal requirements for such a move would fail to pass in American legislation.

A third group takes a rather more positive view of the Muslim Brotherhood, which might be considered as the ‘moderate-accommodation’ camp. The Brotherhood is lauded by this camp as promoting democratisation in the Arab world, is the moderate centre ground of Arab politics, and is essentially the Arab-Muslim version of the German Christian Democrats. Within the Arab world, of course, human rights and civil rights organisations (including those opposed to Arab autocracies) have taken various Brotherhood groups to task on a wide variety of issues, calling into question its claimed moderation. Nevertheless, a fair number of analysts and academics in the United States hold this position, while few if any policy makers in the Obama administration did, and the Trump administration will be uninterested in this argument. This camp also tends to raise the concern that any designation would bring Muslim-Americans under fire, seeing as many Muslim-American civil society groups were founded by people who, a generation or so ago, were linked to or members of the Muslim Brotherhood in one country or another.

The final and fourth group, is rarer, but characterised by a degree of complexity and nuance that is less present than others mentioned. It is perhaps best termed as the ‘Which-MB?’ group. A recent event at George Washington University’s Program on Extremism, highlighted a prominent advocate of the approach, Sir John Jenkins of the International Institute for Strategic Studies. When posed with the question, “Why didn’t the UK declare the MB as a terrorist organisation?” Jenkins (a former senior UK government official who had led a government review into the Brotherhood) responded curtly, “Which MB?”

He then went on to note that there was evidence to suggest that certain members of different Brotherhood groups engaged in terrorist violence, which was grounds to go after them – but the basic point of his intervention was to note that the MB is a varied phenomenon. In the midst of his presentation, he discussed positively the contribution of Ennahdha (a Brotherhood-inspired group) to Tunisian democracy, but also criticised the links of the Libyan Brotherhood to intently radical groups, and the different problems that characterised the Egyptian Brotherhood.

Mr Trump’s administration seems to have put the designation of the Muslim Brotherhood on the backburner for now, with a slew of other issues taking much of the extremely limited ‘bandwidth’ this administration has. If so, the discussion around the Brotherhood will diminish in importance, and the four analytical camps and trends will continue to develop their own discourse on the Brotherhood, probably in isolation from each other. But the question of the Brotherhood is unlikely to disappear – one can only hope it at least somewhat keeps up with the fast pace of developments in the Arab world itself.