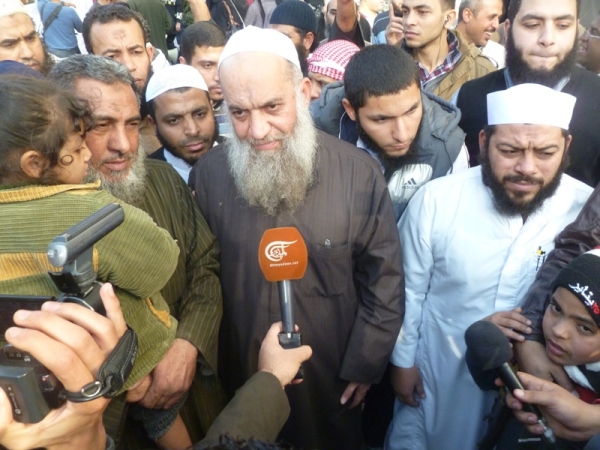 On September 11, 2012, Mohamed al-Zawahiri placed himself in the spotlight. He offered a ten year truce with the United States, preventing terrorist attacks in exchange for non-interference in Muslim affairs. As the brother of Ayman, the leader of al-Qaeda, he believed he was well placed to negotiate.Since then he has appeared periodically in the media. He denied any Egyptian connection to the terrorist attack in Benghazi, volunteered to mediate between government and jihadists in the Sinai, called to boycott the constitutional referendum, and proposed instead each governorate call a separate referendum on Sharia law.

Yet the question circles around him: How much weight does he have outside his famous name? If his most recent appearance at the French Embassy on Friday January 18 in Cairo is any indication, the answer is not much. (The video below shows the arrival of his march on Friday.)

Zawahiri is the leader of what has been dubbed the Salafi-Jihadis. Long associated with Islamic Jihad and the Islamic Group, following his release from prison in March 2012 he has positioned himself to the right of the now politically engaged Islamists of the Muslim Brotherhood and traditional Salafis. But who does he represent?

“We are just Muslims, protesting the killing of civilians,” said Walid, one of about 400 demonstrating against French military activity in Mali. “We have no leadership and we don’t belong to al-Qaeda.”

‘Not belonging to al-Qaeda’ was a frequent refrain of protestors. “The West sees those who want to apply Sharia as if they belong to al-Qaeda. This is a mistake and leads to the clash of civilizations,” said Khalid Harbi, media coordinator for the youthful General Islamic Trend.

But inasmuch as protestors distanced themselves from actual affiliation with the terrorist group, there was much sympathy. “If the West continues this policy,” Harbi added as a poster of bin Laden hung in the background, “we will certainly all enroll in al-Qaeda.”

Ashraf, who declined to give his last name but consorted comfortably with al-Zawahiri, praised the Benghazi attack which killed the American ambassador, and said more of this nature was needed. But as to the nature of Salafi-Jihadis, he was circumspect.

“There is no such thing as Salafi-Jihadism,” he said. “This name is simply a creation of state security, used to divide Muslims.”

The Egyptian regime, he believes, has always conspired with the Americans to distort Islam. “Is there any Salafism without jihad?” he continued. “Who are the Salafis but the first generations of Muslims, and were these not engaged in jihad?”

America, he states, is not at all upset by the situation in Egypt. The ruling Islamists have submitted to the rules of their game – democracy and international legitimacy. So while most protestors compared the French in Mali to the crusaders of old, Ashraf compared them to his own president.

“The French Revolution erupted against the alliance of the king with the religious leaders,” he said, “and it is the same now in Egypt with the Muslim Brotherhood and Salafis.”

But when pressed if jihad was necessary to correct this situation, he gave no clear answer. Instead, he spoke of the three ways of attaining ruling legitimacy in his understanding of Islam. First, the previous ruler appoints a successor. Second, the accepted religious scholars give their approval.

The third path is telling: the ruler seizes authority, even through violence or trickery, but then applies Sharia law. But might this be true of the Islamists, that they are deceiving the people, playing with democracy, though they have an Islamic end in mind? “No,” he said, “they have betrayed Islam by assigning sovereignty to the people in the constitution, and not to God.”

If this is a betrayal, 64 percent of Egyptians accept it, having approved the constitution in a referendum. The unknown is what percentage abstained as per Zawahiri’s advice. But this small percentage did not stop the few hundreds gathered from chanting on behalf of Egyptians, “The people want a new caliphate.”

Salafi-Jihadis appear to be less an organization than an idea. So while the idea of Islam violently reordering world relations – today focused on Mali – is unable to attract many, it does attract a dedicated few. For Zawahiri, this is enough.

“Over the centuries Muslims have been the victorious ones,” he said, “even when they have had small numbers.”