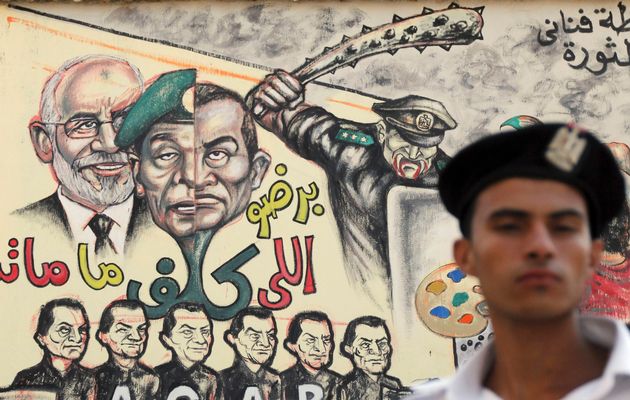 The meeting took place in the villa of the Guide of the Muslim Brotherhood. President Morsi and Khairat al-Shater came early, before the dawn prayer. They had done their ablutions and the Guide led them in prayer. Then they sat down repeating more prayers and the Guide invited them to breakfast. The table was covered in food: foul beans, boiled eggs, omelets, hot pancakes, honey and several types of cheese, primarily fresh cottage cheese. The three of them ate with relish, then went to the Guide’s office, where the meeting began at once as they sipped their coffee.

“I want to hear your assessment of the situation,” said the Guide.

Shater began. “As far as the international situation is concerned, the U.S. administration supports us. They have contacted me and said they would put out a statement against the violence that took place in front of the presidential palace. I said the most important thing was that the statement should be general, with no condemnation of the Brotherhood. The Americans agreed. As for the domestic situation, the Brotherhood youth are ready to deal with any gatherings opposed to the president.”

The Guide touched his glasses and frowned. “Are there enough of them?” he asked

Shater laughed. “Of course,” he said. “The Brotherhood youth are tough. A single one of them can beat up twenty secular kids.”

The Guide looked pleased. “And what do you think, Morsi?” he asked.

The president cleared his throat and said, “Your Grace, you can always see things that we don’t see. May God Almighty inspire you to do what’s right for Islam and Muslims.”

The Guide smiled sympathetically and said, “I feel you want to say something, Morsi.”

“In fact, Your Grace,” said Morsi, speaking in a low voice, “I hadn’t expected the constitutional declaration to lead to all these demonstrations. I tried to contain the anger with the new declaration but there are still demonstrations everywhere.”

The Guide cut him off. “But there’s no justification for that anger, Morsi. We’re right and they’re wrong. God has enabled us to finally rule Egypt. We’ll never allow the secularists who hate religion to take power. Egypt is now entering the age of the Blessed Caliphate.”

Shater nodded in agreement and said, “They’re fighting God’s law. We’ll never leave the constitution to them, not over our dead bodies. Do you know who’s making all this fuss? It’s the remnants of the Mubarak regime, plus a few Copts and some atheist communists. They’re all worthless. We will win any elections and any referendum whatever they do. People in Egypt want religion. Religion is on our side. Whatever the referendum’s about, as soon as people see it includes religion they’ll vote for it.”

President Morsi smiled. “Of course, of course,” he mumbled.

The Guide leafed through the papers in front of him. “Morsi, the police have been negligent about protecting Brotherhood offices,” he said.

“I had a meeting with the Interior Minister and he promised me some improvement, God willing,” said the president.

The Guide looked angry. “That’s rubbish,” he shouted. “More than twenty Brotherhood offices have been set on fire. The Interior Minister is either useless or in collusion.”

“Do you think we should appoint another interior minister, Your Grace?” asked President Morsi.

The Guide wiped his face with the palms of his hands, a habit he has when he’s upset, and sighed.

“No,” he said, “any cabinet change now would send a negative message and could make the police generals hostile. Let’s wait a while and as soon as things have calmed down that minister will have to go. For now, your fellow Brothers have prepared a plan to protect the offices. I want to hear your remarks.”

The Guide passed out copies of the plan to President Morsi and Shater. They started reading in silence. Then Shater said, “It calls for large numbers. We’ll have to call up the reserves.”

The Guide nodded. “Do whatever you think is necessary,” he said.

President Morsi went on reading, then passed the pieces of papers to the Guide. “I think there’s a mistake in the name of the Tanta official,” he said.

The Guide took the copy, noticed the president’s hand and asked “Did you get injured, Morsi?”

President Morsi looked at his right hand and noticed a blood stain. He looked upset. “That’s strange,” he said, “I don’t remember getting injured.”

Shater tried to reassure him. “You probably bumped into something and didn’t notice.”

“No, that’s a very strange mark”

It was like a round coin right in the middle of his palm and the blood was dry and dark. Shater stood up, rushed out of the office and came back with a piece of cotton and a bottle of disinfectant. The president took the piece of cotton, dipped it in the disinfectant and started to rub the mark vigorously. But it wouldn’t come off. The president took his leave, rushed to the bathroom, put his right hand under the hot water and started to rub it with soap. But the mark stayed as it had been. Nothing had any effect. At that point the president panicked. He said goodbye, got in his car and asked the driver to take him straight to a private hospital owned by a doctor friend who was also a colleague in the Brotherhood’s Guidance Office. When the driver told the bodyguards what had happened they came to make sure the president was well, but he hid his right hand, forced a smile, and assured them it was something minor and he was fine. Half an hour later the president hurried into the doctor’s office and said “I’ve found a blood mark on my hand and I don’t know where it’s come from.”

The doctor put on surgical gloves and examined the president. He took hold of his hand, put it under the lamp and started to inspect it carefully. He dipped a piece of cotton into a strong smelling solution and started to rub the mark vigorously. But it made no difference and the mark didn’t change. The doctor threw the cotton aside and said, “Dr Morsi, yours really is a very strange case. The blood isn’t coming from a wound. It’s stuck to your hand and won’t come off.”

“You’ll have to live with it until tomorrow. I’ll talk to a vascular specialist I know in Germany because quite honestly this is the first time I’ve seen such a case.”

Now the president was upset. “I can’t wait. I have a meeting with the ministers at seven o’clock and after that there’s a speech I have to record for television. I can’t deal with people when there’s blood on my hands.”

The doctor looked sorry. He bowed his head and said in a low voice, “Mr. President, there’s no other option. It’s a strange case and we’ll have to do lots of tests here and abroad to find out what’s happened to your hand.”

The president felt there was no point in talking. He thanked the doctor and went to his office in the Ittihadia Palace. After that he spent the day as planned – meetings with Egyptian and foreign officials, then a cabinet meeting and then a speech he recorded for television to broadcast the following day. Throughout all his meetings, the president kept his right hand closed, out of sight of those he was talking to, so that they wouldn’t notice the blood stain. When the president went home it was hard for him to hide it from his wife. When he told her, she was upset. She took his hand, turned it over and tried to remove the blood mark. She put it in hot water, rubbed it with a loofa and a pumice stone, but the stain wouldn’t come o. It was still round and dark, fixed to the middle of the president’s palm as if mocking all attempts to remove it. The president’s wife gave up trying to remove it and went off mumbling “I ask God’s forgiveness.” She sat reading the Qur’an, overcome by a sadness, tears rolling down her face. The president took a hot bath and tried not to think about the stain but in spite of himself he looked at it from time to time in the hope that it would have gone or just shrunk a little. But the mark stayed just as it was. All night the president couldn’t sleep. He had dark thoughts. He wasn’t afraid of death because that would be the will of God. If the blood mark was the symptom of a serious disease, then he would die when his time was up. He was worried about the news spreading. If this mark stayed on his hand everyone would notice it and it would give his rivals an opportunity to attack and discredit him. The president thought back to everything that had happened the previous day: he didn’t think he had come into contact with anyone who was injured and he hadn’t touched blood in any form. As soon as he heard the call to the dawn prayer, he did his absolutions and prayed. He gave orders for his driver and bodyguards to be woken up, got dressed and headed to the Guide’s villa, where he found him with Khairat al-Shater. He gave them a quick greeting and threw himself down in a chair. The Guide looked at him and smiled. “What news? Your hand’s better, I hope,” he said.

“I’m tired, Your Grace,” he said softly. “The mark on my hand won’t come off. The doctor said it was a strange case and he’s never seen anything like it.”

After a short silent pause, as if for thought, the Guide said, “I think you’d better go and see a doctor in America or Europe.”

The president didn’t seem enthusiastic about that idea. “Your Grace,” he said softly, “I’m worried God may be punishing me for the people who were killed.”

“Why would God punish you?” asked Shater in disbelief.

“The people who died included some young Brotherhood members,” the Guide answered firmly.

“Of course, Your Grace,” said Morsi. “May they rest in peace. We see them as martyrs, God willing. But I feel that I’m the reason. If we had acted differently, those martyrs might still be alive.”

The Guide seemed to be suppressing his anger. “Dr. Morsi,” he shouted. “Get this right. The decisions we took were essential to empower us and thwart the plans of the secularists who are hostile to Islam.”

“You wanted us to let them take power, Morsi?”

The president shook his head. “Of course not. You’re right” he said.

The Guide smiled. “All the decisions we take are meant to please God and his Prophet,” he said calmly. “We’re not power-hungry like other people, thank God.”

President Morsi shuddered, held his tongue, then looked at his right hand. The blood stain was still there, unchanged.

Alaa Al Aswany, the Arab world’s bestselling novelist, is the author of The Yacoubian Building, Chicago, and Friendly Fire. His work is published in thirty-one languages worldwide. Al Aswany’s articles have been published widely, in such publications as The Independent (UK), The Guardian (UK), and The New York Times (US), and in French, German, Italian and Spanish publications.