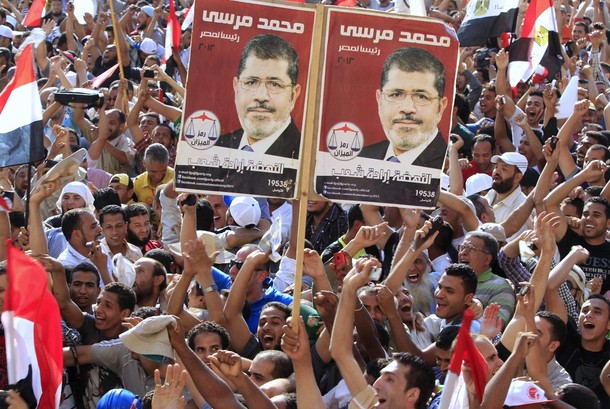 Born on August 20, 1951 to a middle-class family in a small village in the Eastern governorate of Sharqiya, Dr. Mohamed Morsy is the eldest of six siblings. Married in 1978, he has five children and three grandchildren.

Earning his Bachelor’s Degree in Engineering with high honors from Cairo University in 1975, he went on to complete a Masters in Metallurgical Engineering in 1978. In between earning each of his degrees, he served in the Egyptian army for one year, from 1975 to 1976, and was assigned to the chemical warfare unit.

In 1982, Morsy earned a second Masters and a PhD in rocket science from the University of Southern California, completing his degrees on a scholarship for academic excellence. He taught for three years at California State University in North Ridge, in the US, and has also taught at universities in Los Angeles and Libya. In 1985, Morsy returned to Egypt where he began a 25-year long career as the head of the Engineering Department at Zagazig University.

Morsy was elected to the People’s Assembly in 1995, running as a nominal independent candidate for the governorate of Gharbiya, and was successfully re-elected in 2000. From 2000 to 2005, Morsy served as the spokesperson for the Muslim Brotherhood’s parliamentary bloc, following the arrest of fellow member Khairat al-Shater.

In 2004, he co-founded the National Front for Change (Kefaya) with former Prime Minister Aziz Sedki, while also co-founding the National Association for Change with Dr. Mohamed El Baradei in 2010. In 2011, he co-founded the Democratic Alliance for Egypt, in cooperation with 40 political parties and groups, a coalition which soon fell apart, with liberal and secular parties withdrawing in protest to the Muslim Brotherhood’s dominance.

A Member of the Opposition

Morsy was arrested on several different occasions during his political career under Hosny Mubarak’s rule. In May 2006, he spent seven months in jail along with several other members of the Muslim Brotherhood, for participating in a demonstration against the transfer of two judges who had vocally opposed fraud witnessed in the 2005 elections.

On the morning of January 28, 2011, at the beginning of the uprising, Morsy along with 34 of the Muslim Brotherhood’s high-ranking members, were detained at Wadi Natrun Prison. Two days later, he was released from the prison by residents in area, after Egyptian police withdrew, leaving a security vacuum across the country.

On April 30, 2011, Morsy resigned from the Guidance Bureau and was elected President of the Freedom and Justice Party, the Muslim Brotherhood’s political party formed after the January 25 uprising, a position he has said he would give up upon his election.

He was fielded as the Freedom and Justice Party’s precautionary presidential candidate, out of the fear that SPEC would rule that Muslim Brotherhood member Khairat al-Shater could not run for the presidency. As was expected, Shater was excluded from the race, pushing Morsy to the forefront.

After beating out 11 other candidates to reach the runoffs against Ahmed Shafik, who served as Hosny Mubarak’s last Prime Minister before his ouster, Morsy won the presidential candidacy with 51.73% of the votes.