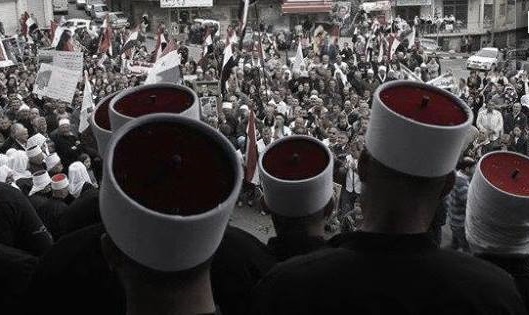 During the three years of war across the border in Syria, periodic reports have surfaced claiming that the Druze population in the Israeli controlled Golan Heights is inching closer to turning against Syrian President Bashar al-Assad. As the conflict in Syria endures, observers will question the Golan-Druze’s loyalty to the embattled Syrian president, and will find small, intermittent protests against the regime in Majdal Shams, the largest Druze village in the Golan Heights. An even smaller number of Golan Druze are requesting Israeli citizenship. In spite of those few Golan Druze who have seemingly turned against the regime, support for Assad and unity with Syria will continue to define political attitudes in the Golan.

Israel took control of the small territory in 1967, separating four small Druze villages from Syria. The Golan-Druze have mostly remained fiercely loyal to Syria and the Assads despite forty-seven years of occupation and a campaign to impose Israeli citizenship on them in 1981. Hafez al-Assad, and later Bashar, cultivated this loyalty through policies that targeted the Golan-Druze. In the 1970s, Syria began a program that awarded scholarships for Golan-Druze students to study in Syria. When Israel suspended the program from 1983 to 1989, Syria arranged for these students to continue their studies in the USSR. In this way, Syria rewarded and economically empowered students who were the most active in pro-Syrian organizations in the Golan Heights.

In 2005, the Assad regime continued its support of the Golan-Druze, negotiating an agreement to purchase apples from Druze farmers in the Golan Heights at a premium price. This business relationship was a boon to Druze farmers who struggle to sell their produce in an already saturated Israeli market. During good harvests the Syrian government imports nearly 18,000 tons of apples from the Golan Heights, providing the Druze farmers with valuable income. Despite the current violence and political turmoil in Syria, the regime continues to import produce from the Golan. Before the war in Syria, rumors surfaced that the Assad regime participated in preliminary talks with Israel about diverting irrigation water for use by Druze farmers. While nothing ever came of the rumors, they reflect the Golan-Druze community’s attitude towards the Syrian president. For many of the Golan-Druze, Assad has shown his willingness to fight for their community. It appears unlikely that the community would risk losing the financial support they receive from the regime by openly turning against it.

The Golan-Druze’s continued loyalty to Assad lies not only in the support they receive from the regime but also in their strong ties to Druze community living across the border in the Jabal al-Druze in Syria proper. Prior to the occupation, these two communities shared close ties which they have tried to maintain since. Despite the practical and political difficulties, they frequently intermarried, deepening the ties to each other. As a consequence the Golan-Druze community looks toward Syria for its politics rather than the Israeli-Druze—who fight in the IDF and enjoy relatively good standing in Israel. Thus the Syrian Druze community’s stance toward the regime is a decent barometer of Golan-Druze support for Assad.

The Syrian-Druze community’s stance toward the regime over the last three years has at times appeared ambiguous to casual observers of the conflict, but on closer examination it has remained steadfast in support of the regime. With few exceptions the majority of the Syrian-Druze who have taken up arms during the conflict have done so in support of the regime. On social media, the Syrian-Druze militia (Jaysh al-Muwahidun) appears regime-oriented despite its official stance of neutrality. Many from the community also actively serve in the Syrian army. Of course, the Syrian-Druze community is not monolithic in its allegiance, but all discernible indications point to strong support for Assad within the community. The fragmented Syrian opposition lacks a coherent message appealing to Druze. Kamal al-Lubwani, a prominent Syrian opposition figure, suggested that the opposition give up Syria’s claims to the Golan Heights in exchange for an Israeli-enforced no fly zone. These comments undermine the Golan-Druze community’s hopes of one day being reunited with Syria. Unsubstantiated reports surfaced late last year that Islamist rebels in Idlib forced Druze to convert to Sunni Islam. Reports like this fuel the Druze community’s suspicions of a Sunni dominated alternative to the Syrian regime. Until the Syrian opposition marginalizes its extremist elements and establishes an agenda that assures the Druze community a better future in Syria, the Druze will continue to throw their weight behind Assad.

The Golan-Druze community’s support for Assad mirrors the Syrian-Druze. This past December, Israeli authorities arrested Golan resident Rafat Halabi after he returned from fighting in Syria. Israeli authorities charged him with passing information on IDF movements on to Syrian authorities. At least two other young Druze men from the Golan Heights crossed into Syria with the intent of fighting in the Syrian army this year. Historically, several community members have served prison time for collaborating with Syrian intelligence. During the forty-years of Israeli occupation the community has regularly asserted their loyalty to Syria, which until recently has meant the Assad regime.

The Israeli government has taken steps to support the Druze in the Golan Heights. Israeli authorities announced a plan to spend nearly sixty million dollars developing the four Druze villages there. Like earlier attempts, this latest gesture will do little to dissuade the Druze from supporting the Assad regime. The Golan-Druze community views itself as Syrian and continues to follow the lead of their brothers across the border. As long as the status quo remains, the Golan’s future ties with Syria rest in the hands of the Assad regime.