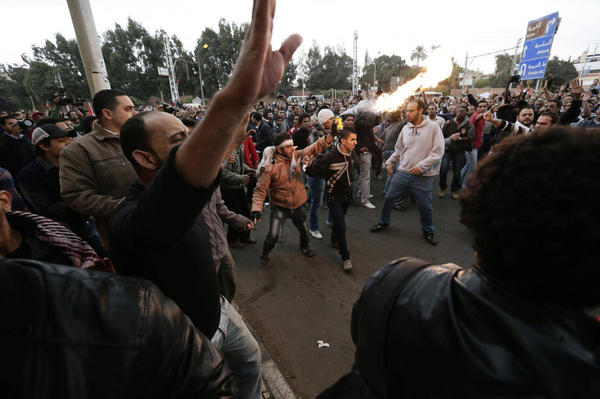 Politics in Egypt has degenerated into the question: Who do you trust? A more critical question right now is: What was their plan? President Morsi addressed the nation late Thursday evening and tied Wednesday’s violence at the presidential palace to undefined ‘political parties’. If the vagary was intended to present the clashes between supporters and opposition neutrally, his overall point was clear in labeling the ultimate culprit as the old, corrupt regime. Surely he was not implicating the Muslim Brotherhood.

Yet it is undeniable the recent violence would not have taken place if not for a decision made by the Muslim Brotherhood to protest at an opposition site.

The question is why? Twice before the Brotherhood announced it would hold a rival protest in Tahrir, only to either cancel or move it to a different location. This most recent modification led to their wildly successful demonstration at Cairo University, coinciding with the announcement of the finalized constitution draft.

Observing this apparent wavering, a cynical mind could imagine the Brotherhood was only feinting. By changing their plans they gained moral high ground. Not only were they honoring their opponents’ right of free expression, they acted in wisdom to avoid potential clashes.

This strategy makes sense, given that their goal was to reach the December 15 referendum on the constitution. They could endure all manner of demonstrations, if only the next two weeks would pass.

Perhaps, however, it was not the size of the anti-Morsi demonstration on December 4 that changed the equation and suggests the Muslim Brotherhood really was wavering. Rather, it was the location.

Of course, the size of the protest, eyewitness reports putting the number at “hundreds of thousands,” was important enough for the Brotherhood to argue it was no more than 2,000 people. The threat, though, was the increase, and the permanent presence of a sit-in Morsi’s doorstep.  As the clock ticked toward the date of the referendum, it would be a constant reminder of the standing refusal of Morsi’s constitutional declaration.

Already convinced there was a conspiracy to unseat them, it appears they could not allow a picture of popular support for the opposition

But was their motive more sinister? Did they intend violence in the effort to seize control of the area? Here is where the evidence becomes murkier, with the possibility present of conspiracy against them.

Early Wednesday morning al-Watan relayed information from a ‘source’ in the Muslim Brotherhood. It stated the Guidance Bureau adopted the idea for a massive demonstration at the palace during a late night meeting. Crucially, it also reported that in the case of a continued sit-in their march would remain far away as to prevent any contact.

But that same day Ahram Online reports a ‘leading member’ of the Brotherhood’s Freedom and Justice Party conveyed a different message. This source did not believe that clashes would take place, but offered an ominous nonchalance. "Let what may happen, happen," he said.

In the heat of the clashes, Erian spoke to Misr25 TV, calling on people to head to the presidential palace in order to apprehend the ‘thugs’ committing violence. Ascertaining a pre-planned decision to provoke violence, however, remains speculation. But as calls for de-escalation increased, Brotherhood spokesman Mahmoud Ghozlan stated all sides should depart and not return, leaving the palace as a ‘symbol of the nation’. Clearly, they want protests elsewhere.

Yet apart from their own, original decision to demonstrate at the palace, does the unfolding of events demonstrate the Brotherhood’s ill intention?

EgyptSource’s Wael Iskander told Jadaliyya his first-hand account of Brotherhood supporters initiating a dispersal of the ongoing sit-in. The actual violence, however, did not begin in earnest until anti-Morsi protestors returned to defend their turf. Even then, he reports, it was the pro-Morsi crowd that was most aggressive and employed live ammunition. This video demonstrates such weaponry, though precise identification is difficult.

On the other hand, al-Nahar carried video of pro-Morsi demonstrators insisting they were the ones attacked. Furthermore, they extracted confessions naming certain liberal politicians of funding the thuggery.

Who do you believe? Could it be that a third party took advantage of the Brotherhood’s decision to demonstrate at a point of contention, and shot at both sides?

While possible, Brotherhood rhetoric must be noted. The day of the peaceful anti-Morsi protest at the palace the Brotherhood’s newspaper, Freedom and Justice, stated that opposition leaders Hamdeen Sabbahi and Mohamed el-Baradei were being investigated for attempting to overthrow the regime. Amr Moussa, meanwhile, was accused of meeting with Israeli leaders in support of this plot.

Oddly, and somewhat ominously, the Islamic Group called for the anti-Morsi Tuesday demonstration to be peaceful, and especially requested that churches play a role to guard it, as there would be many Copts present. While this statement may simply express encouragement in Christian values, it opened an identification other Brotherhood leaders hint at exploiting.

The day of the clashes IkwanOnline collected round-ups on the events from newspapers around the world. They chose to headline this article, however, quoting a detail from the New York Times. “Wealthy and Christians Demonstrate at Ittihadiya [the name of the presidential palace],” it read.

And as mentioned above, President Morsi stated the violence was tied to ‘political parties’.

Of course, much of the above may be misinformation. For example, al-Badeel ran an article claiming the grandson of former Brotherhood General Guide Hassan al-Houdaiby  tagged current Deputy Guide Khairat al-Shater as ordering the sit-in be attacked. Ibrahim al-Houdaiby, the grandson, admitted the paper sought an interview with him, but upon his refusal invented the whole story.

Other accusations against President Morsi and the Muslim Brotherhood have been rampant, and indeed, their headquarters across the country have been attacked and burned. Perhaps there is a conspiracy aimed against them. It would not be the first time elected Islamists were denied authority.

Yet in Egypt’s polarized environment unfortunately the cynical questions persist. Could the Brotherhood be burning their own offices? Could the state and police be standing aside allowing it to happen? Or, as this first-hand report offers, could it just be the work of rowdy, chaotic kids?

If these answers are ever known, it may not be until after the political situation stabilizes. Whichever side wins is likely to marshal evidence against their opponents, who, in fact, may well be guilty. But for now, two questions remain:

Why did the Brotherhood demonstrate at the presidential palace? And, who do you trust?