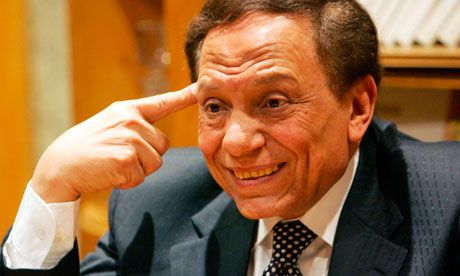 On Thursday, February 2, fallout from the previous day’s violent soccer clashes in Port Said overshadowed reports that Egyptian film star Adel Imam had been sentenced to three months of hard labor for “insulting Islam” throughout his long filmmaking career.  This is the second religious defamation case against an Egyptian public figure in as many months: in December, telecom tycoon Naguib Sawiris, a Coptic Christian and multi-billionaire, was charged with a similar offense, but in this case for his Twitter circulation of a cartoon featuring a Salafi-garbed Mickey and Minnie Mouse (replete with a bushy beard and niqab, respectively).

In one sense, it is easy to make light of these court cases: it is doubtful that either defendant will spend much if any time in prison, and so far these are isolated events.  Both Imam and Sawiris are also controversial elites, and therefore easy and exceptional targets for Islamist lawyers to pursue.  However, the fate of these prominent figures, and the legal precedent their cases are seeking to firmly establish, are closely tied to Egypt’s social and political trajectory. If the lawsuits against Imam and Sawiris are successful, the emboldened Islamist community will have clearly found a powerful legal weapon to wield against any public figure who dares to challenges conservative Sunni Islamic mores and dogmas, or even those who simply oppose the Islamist vision for Egyptian society.

Islamist lawyer Asran Mansour’s case against Adel Imam has been a strange one from the start.  The 72 year-old actor has remained one of the most beloved figures in Egyptian film (Cairo has enjoyed a reputation as “The Arab World’s Hollywood” for decades): his movies are consistent box-office draws, and his trademark, toothy grin is instantly recognizable to any Egyptian– or any Arabic speaker with a TV, for that matter.  In fact, Imam’s popularity is nicely represented by his appointment to the post of U.N. Goodwill Ambassador in 2000, joining the global celebrity ranks of Angelina Jolie in this humanitarian role.

However, Adel Imam has never shied away from provocative material over his long and wildly popular film career.  His films have addressed issues such as regime bureaucracy in “Terrorism and Kebab” (1992), the Gama’a Islamiya’s war on the Egyptian government in “The Terrorist” (1994), Egyptian-Israeli relations in “The Embassy Is In the Building” (2005), socio-political corruption and moral decay in “The Yacoubian Building” (2006), and Christian-Muslim tensions in “Hasan and Murqus” (2008).  Some of these have long been controversial: “The Terrorist,” for example, drew violent threats from Islamist extremists, leading to official censure shortly after its release, and “The Yacoubian Building,” based on Alaa al-Aswany’s influential novel of the same name, was highly criticized – although not banned – for its depiction of heterosexual and homosexual promiscuity.  It is those roles which have criticized or lampooned various segments of the Islamist movement that offended Asran Mansour, reflected in the fact that his lawsuit included a broad attack on the depiction of Islamic symbols in films throughout Imam’s career.

On the other hand, the case against Naguib Sawiris concerns only the single, isolated, image described above.  These charges were filed in June 2011 by Mamdouh Ismail, a lawyer affiliated with the Salafi Gama’a Islamiya.  This lawsuit, which was approved in January to go to trial, charges Sawiris with defaming Islam by mocking Islamic dress and custom in the “Salafi Mickey” cartoon that he tweeted to his followers earlier that same month.  It is true that Sawiris is deeply unpopular among Islamists, many of whom see him as an uppity Copt, an economic elite who profited from ties to the Mubarak regime, and a political rival for his founding and support of the liberal Free Egyptians Party last year.

Since Muslim scholar Nasr Hamid Abu Zayd fled Egypt in 1995 after Islamists accused him of apostasy (charges that prompted an Egyptian court to order him and his wife to separate), primarily for his controversial approach to Qur’anic interpretation, Islamist lawyers have held at their ready the means to stifle those who express views critical of the conservative Sunni tradition.  These examples thus constitute renewed attempts to utilize the legal device of a broad set of concerns for religious “sensibilities” (i.e., apostasy, blasphemy, defamation) to criminalize any points of view that veer from the Islamist vision– of shari‘a jurisprudence, of reading the Qur’an, of social practice, of expression, of artistic creativity.

As Islamists in the form of the Muslim Brotherhood’s Freedom and Justice Party (FJP) and the Salafi Nour Party assume leadership of the Egyptian government, we should expect to see more of these cases prosecuted.  This is made more likely by the fact that nearly every voice in the Egyptian public sphere representing the Islamist movement or traditional Islamic institutions has defended the need for legal and/or constitutional exceptions to individual liberty on a moral or religious basis.  For example, Egypt’s new speaker of parliament Muhammad al-Katatni recently announced that he would work for personal freedoms as long as they “do not harm society,” while commenting on the need to “protect society from moral degeneration.”  Even al-Azhar’s recent and otherwise remarkable declaration of personal freedoms includes caveats that construe freedom as a right as long as it does not challenge the sanctity of “the heavenly religions” (Islam, Christianity, Judaism).  Such exceptions should not be uncritically overlooked: in practice, they may easily be used to cancel out the concept of freedom altogether.

This series of cases is an important reminder that democracy and freedom cannot be wholly defined by the electoral process: they must also include the principles of individual conscience and freedom of belief.  For Egyptians to genuinely achieve full freedom and individual rights, these principles cannot be watered down by the defense of so-called “religious sensibilities.”  Sadly, however, these cases are signs that the rising Islamist powers in Egypt are likely to seek to subdue these rights and liberties with greater frequency and intensity.

That will be a severe blow to the hopes of the nation and the world for personal freedoms and true democratic reform in Egypt.  It will also confirm that while many actors in the Islamist movement have embraced the electoral process, they have not truly embraced the foundation of liberty that makes democracy meaningful.  Their vision of society poses a real threat to the ability of Egyptians to freely express themselves– or to even go to the movies.