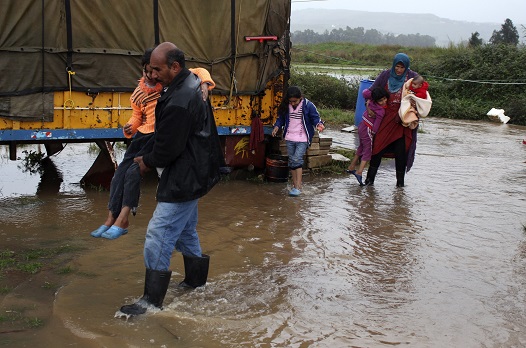 Due to their strategic locations, countries in the Middle East and North Africa (MENA) have been hotspots for exploration and exploitation of energy resources—especially oil and gas—for decades. Yet, the Mediterranean climate is proven to be just as volatile as its security issues. The consequences of changes in temperature, extreme weather conditions, and rainfall superimposed on a severe water crisis, political turmoil, and a web of intersecting violent conflicts, are all destabilizing issues likely exacerbated by climate change.

At the heart of the climate change discussion is the agriculture-water-food security nexus which overlaps with one another. The fifth assessment report of the Intergovernmental Panel on Climate Change (IPCC) defines food security as the availability, access, utilization, and stability of food resources. Food insecurity is determined by analyzing if enough food is produced, whether people have access to it, and if they can afford it. It is also important to determine the impact of local conditions (e.g. extreme temperatures, drying trends, precipitation trends) on people’s nutritional intake from food and if the supply and access is guaranteed.

Analyzing these indicators could help contextualize the depth and severity of the problems within the region, especially as agriculture employs more than 35 percent of the region’s population and contributes 13 percent to the region’s GDP vs the global average of 3.2 percent. The world’s top nine wheat importers are MENA countries. Yet, around 50 percent of regional wheat and barley, 40 percent of rice, and nearly 70 percent of maize for the region is met through imports.

Such high levels of import dependency result in high vulnerability to global food price fluctuations, which, to some extent, are also driven by climate change impacts in food-exporting regions. Climate change driven impacts on agriculture take the form of crop yield losses due to several crops exceeding their temperature-tolerance levels, shorter growing seasons, and reduced soil moisture which influence food pricing and exports directly. For example, studies showed that climate and hydrological events—such as droughts and floods—coupled with global market fluctuations contributed to high wheat prices in Egypt during 2008 that affected the price of bread.

In terms of water security, a recent World Bank report estimated that over 60 percent of the population in the MENA region live in areas with high or very high surface water stress with reduced available amounts of water for immediate uses such as agriculture or filling reservoirs for drinking water. Most of the agricultural area is rainfed. However, a large portion of the region’s agricultural production is also based on dryland farming systems; crop production where annual potential water evaporation exceeds annual precipitation. Across the region, a variable annual rainfall is in the range of less than 300 mm; 200-300 mm represents the lower limit of rain-fed agriculture. This leaves the region highly vulnerable to temperature and precipitation changes.

Water scarcity is already a defining challenge in the region as the annual recharge rate of renewable water resources—average flow of rivers and recharge of aquifers generated from endogenous precipitation— amount to only 6 percent of its average annual precipitation; against a world average of 38 percent. During the period of 2005 to 2015, annual per capita freshwater availability in the region dropped by about twenty percent, from 990 to 800 m3. The world average is ten times higher at 7,525 m3/capita/year.

The IPCC report came out with a 4˚C scenario; emissions and world temperatures rise to 4˚C above industrial levels by 2100. Climate models predict the result of four degrees Celsius if no mitigation action is taken and its impacts. World leaders pledged to limit emissions on a global scale to mitigate the rise of world temperatures. However, this model, and the more ambitious 2˚C, would add further pressure on the region to meet these goals while maintaining its water resources and agriculture. Crop yields could decrease by up to 30 percent at 1.5–2°C and by almost 60 percent at 3–4°C specially for crops such as legumes and maize as they are grown in the summer period.

By 2050, the population in the MENA region is projected to double, but it is also estimated that climate change will account for 22 percent of future water shortages in the region while 78 percent of increased future water shortages can be attributed to socioeconomic factors. According to the World Bank, this region is expected to have the greatest economic losses from climate related water scarcity as growth rates decline by as much as 6 percent of GDP by 2050 due to water-related impacts on agriculture, health, and incomes. Even with the region’s historical precedent in enduring harsh climate conditions—low precipitation, floods, and droughts—the convergence of these ongoing challenges with recent societal developments,—rapid population and urban growth, political instability, conflict-induced migration, and widespread poverty—will amplify the region’s vulnerability to climate change.

Prior research shows a correlation between climate anomalies and violent conflict. Yet, these studies specifically highlight drought-induced agricultural shocks and adverse economic spillover effects as key indicators that link the two trends. For example, some argue that the extreme drought in Syria and subsequent displacement of farming families from rural to urban areas during the years preceding 2011 was an important hidden stressor behind the outbreak of violence. Similarly, food price hikes in Egypt caused by the food crisis in 2008 may have contributed to social unrest, but were clearly not the main factors behind the Egyptian revolution in 2011. However, the causality between climate change and violent conflict is difficult to establish because of the interconnected nature of different drivers including country-specific socio-political, economic, and cultural factors.

While climate change is unlikely a main driver of conflict in the region, it cannot be overlooked as a threat multiplier of conflict. The implications of water and food insecurity along with subsequent social and economic burdens indicate these issues are interconnected; and likely to be even more so in the future. But as the MENA region is one of the most varied economically in the world—GDP per capita range from $1,000 in Yemen to more than $20,000 in the Gulf Cooperation Council (GCC) countries—, there could be enormous variations in the adaptation capabilities to climate risks within the region.

While GCC countries may have the financial capabilities needed for adaptation measures, the rest of the region is more vulnerable to risks. Within those highly vulnerable countries, there are even more variables to consider such as the poor and rural populations that are at higher risk of instability due to their high dependence on an agricultural livelihood. Few, if any, subsidies or services are provided from governments to redevelop the agricultural sector into a sustainable industry that protects the working class.

While the world may have focused on stability in the MENA region for decades in an effort to guarantee a regular supply of oil and gas, climate change is projected to disrupt this supply even further. Through heavy dependence on imports, increasing water scarcity, and further risks on domestic agriculture; the MENA region finds itself more dependent on what happens elsewhere in the world. The fluctuations of food prices and abrupt changes in crop yields have become vital to the stability of MENA.

The projected trends in the region of weakening institutional capacity to combat climate change, through mitigation and adaptation, could be severe. Adaptation measures might include developing drought and flood preparedness plans, building capacities to support disaster risk management, and increasing the resilience of rural communities through transition to water mobilization and management practices. Similarly, mitigation measures might include investments in renewable energy, sustainable transport systems, and climate smart agriculture.

The MENA region should develop high levels of climate resilience by using developing countries’ capacities to access climate finance, efficient water governance and awareness, and building the regional strategy for climate mitigation and adaptation. Climate-related risks are cross-thematic and have spillovers in different areas—food, water, conflict, etc.—as explained earlier. However, even if there are initiatives working in parallel for climate resilience in land, water, and food security, they could fail to achieve their goals due to lack of collaboration and resilience regarding spillovers from migration and conflict risks. These issues highlight the need to change the linear approaches of siloed development policies in MENA which fail to tackle the complexity of risks. Instead, governing institutions can showcase the benefits of an interconnected approach that accounts and provides for all areas affected by climate change.

Mahmoud Abouelnaga holds a Masters in sustainable energy engineering from KTH Royal Institute of Technology in Stockholm, a Masters in environmental management from Universidad Politecnica de Madrid, and Bachelors in Petroleum Engineering from Suez University in Egypt. He has worked in the energy and environment field in Egypt, Nigeria, and France. Currently, he’s part of the inaugural class of Obama Scholars Program for International Development and Policy at Harris School of Public Policy at the University of Chicago.

Image: Photo: Syrian refugees make their way through flood after their tent was damaged at a makeshift settlement, during a wind storm in Akkar, northern Lebanon January 7, 2015. A storm buffeted the Middle East with blizzards, rain and strong winds on Wednesday, keeping people at home across much of the region and raising concerns for Syrian refugees facing freezing temperatures in flimsy shelters. REUTERS/STR