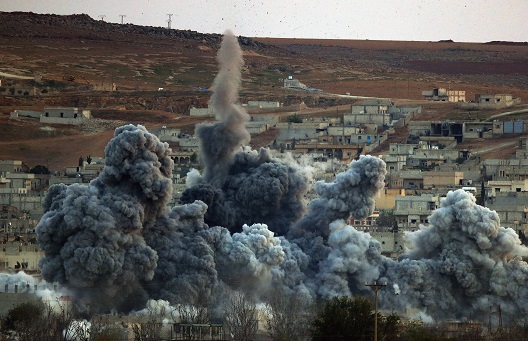 More than two months into the US and coalition air campaign, Obama administration officials and members of the US military’s senior leadership are confident that “Operation Inherent Resolve” is having the intended effect against the Islamic State (ISIS or ISIL). The air strikes that began in Iraq on August 8 and the strikes that began in Syria on September 23, according to the Pentagon, are forcing Islamic State militants to adapt their battlefield tactics, disperse units into smaller and more mobile teams, and change the way it behaves as an offensive force.

The problem, as US officials have quickly come to realize, is that blowing up hundreds of Humvees, staging positions, and armored trucks has failed to convince editorial boards, cable news commentators, columnists, and a wide swath of the American public that the strategy is working. There is a very real concern in both parties, particularly Democrats already in the midst of a tough election year, that President Barack Obama really does not have a long-term game plan—outside of a few hundred strikes from the air—to “degrade and eventually destroy” the Islamic State. Eugene Robinson, a columnist at The Washington Post who is normally supportive of President Obama’s foreign policy restraint, expressed some of the doubt swirling around the Beltway since the anti-ISIS air campaign started, as has The Washington Post’s own editorial board, which blasted what the paper views as an overly cautious and risk-adverse administration. Despite repeated appearances in front of the press and the president’s numerous comments to the media, the administration has yet to effectively articulate to the American people why strictly using air power without “boots on the ground” is the right strategy for the war.

If persuading the US public of the strategy’s utility is difficult, prosecuting the war and building up the local ground forces that are required to take full advantage of US, European, and Arab airpower is even more so. President Obama’s repeated assurances that US personnel will not be deployed to the front-lines as combat soldiers or spotters—a position that a vast majority of Americans support—has made it an absolute imperative to get Iraqis and Syrians who are willing to fight into the field as quickly as possible. Unfortunately, last June’s humiliating retreat of tens of thousands of Iraqi soldiers in the face of a few thousand ISIS fighters in Mosul and Tikrit and the recent routing of Syrian rebels from their strongholds by al-Qaeda-linked Nusra Front fighters does not inspire much confidence.

If the assessment of Gen. Martin Dempsey, the Chairman of the Joint Chiefs of Staff, is correct, nearly 50 percent of the Iraqi army is incapable at fighting ISIS effectively in the field at the current time. In other words, twenty-four of fifty Iraqi army brigades cannot perform the jobs that its men have signed up to: defend the Iraqi people, clear the neighborhoods from the extremists, ensure that terrorists are not able to press a counterattack, all the while gradually retaking and holding the territory that ISIS militants have ruled as their domain since last January. Performing all of these functions nearly simultaneously would be difficult for any nation amid what is bordering on a civil war. But for the new Iraqi Government of Prime Minister Haider al-Abadi, it is an impossible task to accomplish without a committed US, regional, and international training component.

The battlefield geometry on the other side of the border is even worse for the United States and its Arab and European coalition partners. Although the Iraqi army is severely depleted, there are at least some brigades that can take advantage of US and European airstrikes—Mosul Dam, Haditha Dam, and Sinjar were all retaken by Iraqi army elements with the assistance of coordinated US airpower. With the exception of a divided, fractious, under-resourced, and ineffective Free Syrian Army, the US-led coalition feels that there are no reliable and trustworthy ground forces. Congressional authorization for a $500 million training program in Saudi Arabia is a welcome step to alleviate those problems, but the program is flirting with disaster given the small-scale nature of the people who will be recruited, vetted, trained, equipped, and eventually deployed. With an estimated 30,000 fighters in ISIS’s ranks, there are very real questions that should be asked as to whether training and equipping 5,000 moderate Syrian fighters a year will be enough, fast enough.

US airstrikes on ISIS targets are central to the strategy that President Obama has outlined to the world. The operations from the air have hit hundreds of targets that, in the words of CENTCOM Commander General Lloyd Austin, are “hindering their [ISIS’s] ability to mass and to shift combat power. Yet as satisfying as airstrikes are, deploying planes to hit fixed and mobile targets is a short-term holding measure. Without a fully resourced training effort supported by the international community, the US air campaign over Iraq and Syria resembles nothing more than a ramped-up version of Washington’s drone program in Pakistan and Yemen: a program that has killed thousands of terrorists to keep al-Qaeda and its affiliates off balance. To date, US fighter, bomber, and drone aircraft perform a similar function—hitting ISIS formations when the opportunity presents itself and using air power to defend critical Iraqi infrastructure. If local forces cannot capitalize on air superiority, the United States and its coalition partners could conceivably be striking from the air for years just to maintain the gains that have been made over the past three months.

Improving Iraqi brigades that need desperate help and establishing a Syrian ground component that can sustain offensive operations against ISIS will ultimately “win” this war. President Obama clearly recognizes this: the question that has not been answered to the satisfaction of the American people and many military experts is whether the training program will be large enough and quick enough to actually make a difference while it still matters.

Daniel R. DePetris is a Middle East analyst at Wikistrat, Inc., and a contributor to The National Interest.

Image: An explosion following an airstrike is seen in the Syrian town of Kobani from near the Mursitpinar border crossing on the Turkish-Syrian border in the southeastern town of Suruc in Sanliurfa province November 2, 2014. (Photo: REUTERS/Yannis Behrakis)