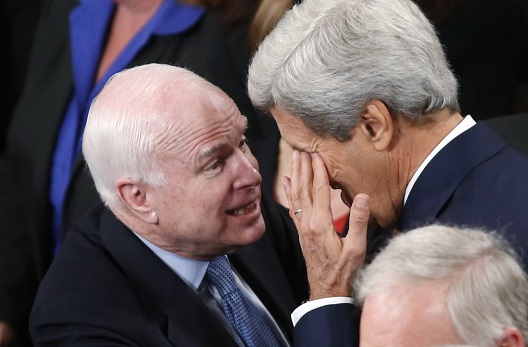 As Americans flock to the polls today, predictions increasingly favor Republicans to win the 2014-midterm elections. Although Democrats hold out hope to retain control of the Senate, the odds in Republicans’ favor encourage serious thought about how the policy choices of a Republican Senate may or may not differ from the policies of today’s Democratic Senate.

In many policy areas, both Republican and Democratic strategists predict clear, significant changes based on who controls the Senate. Generally, a Republican Senate would loudly challenge President Obama on foreign policy across the board. Specifically for Syria, it is less clear whether a Republican-controlled Senate means continuity or change.

If the Republicans seize the Senate majority, John McCain (R-AZ) will likely become Chairman of the Armed Services Committee, charged with oversight of the military, including its activities in Syria and Iraq, as well as President Barack Obama’s proposed train-and-equip program for the moderate armed Syrian opposition. Retiring Democratic Chairman Carl Levin (D-MI) has pushed gently for a more assertive Syria policy, permitting the traditionally bipartisan SASC to develop something of a consensus on Syria policy.

McCain’s support of the train-and-equip program, and of a broadly more assertive Syria strategy, is well known. As Chairman, he would likely hold hearings to grill administration officials, but may have less ability to enact legislation than retiring Chairman Levin. Levin sought to move any legislation with bipartisan support. McCain would likely find it more difficult to build a bipartisan consensus because of his history of more partisan attacks, including on Senators Kay Hagan (D-NC) and Jeanne Shaheen (D-NH), his Armed Services Committee colleagues. The SASC stance on Syria if Democrats retain the Senate is much less clear, as Senator Levin has no clear successor.

In a Republican Senate, Bob Corker (R-TN) would become Chairman of the Foreign Relations Committee, with oversight for the State Department, USAID, and foreign policy generally. Like the SASC, the SFRC tends to operate in a bipartisan manner. Senator Corker has worked closely with Democratic Chairman Menendez (D-NJ), and the two are likely to continue such cooperation. Under their leadership, the SFRC has been the only committee that has passed stand-alone legislation calling for greater involvement in Syria with bipartisan support (other measures were tacked onto larger legislation).

The big question mark in a Republican Senate is the leadership. As current Majority Leader Harry Reid (D-NV) has demonstrated by burying the Foreign Relations Committee’s Syria legislation, leadership has significant ability to control which legislation coming out of Committee actually makes it to the floor for a vote. Even if McCain and Corker were able to pass strong legislation out of their committees, Republican leadership would have the final say about its fate.

Assuming he wins his own tight race as part of a larger Republican victory, Mitch McConnell (R-KY) will become Majority Leader. In his current position as Minority leader, McConnell was the only party leader—in either House or Senate—to oppose airstrikes against the Syrian regime following its use of chemical weapons in 2013. He has avoided public statements on Syria since, and his position is unclear.

McConnell’s colleagues on Republican Senate leadership have a mixed record on Syria issues, but none have made any significant statements on Syria in the last year, beyond perfunctory criticism of the President’s “ill-advised” policies. Once in the majority, Republican leadership will eventually be forced to take a real position on the issue.

Senate Cooperation with the House: Change

Finger pointing over who is most responsible for Washington’s dysfunction has been the defining feature of a divided Congress in recent years. Republican control of both chambers should remove this barrier to more efficient legislating, giving House Republicans a partner they are likely to trust more than the current Democratic Senate.

Compared to the House, the Senate has generally been more forward-leaning on Syria policy, in part because of its greater institutional inclination to tackle foreign policy issues. A Republican Senate’s leadership on Syria and other foreign policy issues is likely to find the House more amenable to cooperation than Harry Reid’s Senate has to date.

This potential for increased collegiality has important implications for any future Authorization of Use of Military Force (AUMF), Defense Authorization, or other legislation which comes before Congress; all would become easier to pass.

For a Republican Senate, the Syria policy debate will likely change in volume, but not significantly in content. To date, there has been bipartisan criticism of the Administration’s strategy. This is unlikely to change. For the Senate, the as-yet unclear Syria policy of the Republican leadership is the biggest unknown variable. For Congress as a whole, the legislative logjam is likely to break with Republicans in charge in both chambers. Whether this leads to significant Congressional participation in the coherent formation of Syria policy depends on the degree to which a Republican Congress is willing to work with President Obama.

Jason T. Hunt is the former Government Affairs Manager for the Washington DC Representative Office of the National Coalition of Syrian Revolution and Opposition Forces.