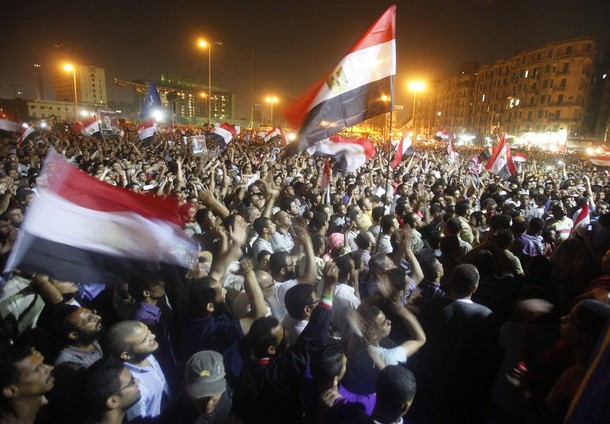 What do Egypt’s transition and a lousy orchestra have in common? When the music is a mess, the conductor – or rather the SCAF – starts over “from the top.”

After a year and a half of a messy transition that is going nowhere fast, Egyptians were stunned by two Supreme Constitutional Court rulings that dissolved the People’s Assembly and kept Mubarak’s former Prime Minister in the Presidential race. As if these two decisions had not shaken the political field sufficiently, the SCAF has now amended the interim constitution to prolong military rule, granting the SCAF legislative powers until a new Parliament is elected, and curbing the powers of the next president — a question that may not be settled immediately, with both candidates claiming victory ahead of the scheduled announcement of final results on June 20.

The Muslim Brotherhood’s candidate, Mohamed Morsy, claimed victory just a few hours after the conclusion of polling – a move that was interpreted as a psychological attack on Shafik’s campaign. Shafik soon retaliated with the same weapon, also claiming to have won. Faced with these dualing victory claims and a battery of alleged electoral violations, the Supreme Presidential Electoral Commission (SPEC) has postponed the announcement of final results until Saturday, June 23.

The two historical rulings by the Constitutional Court that took place on June 14, 2012 require a total reset, restarting the transitional period from square one – only now under a ruling military council that has more power than it did last January, with dangerous implications for Egypt’s already strained economy, future constitution, and the prospects for  building a civilian democracy.

Millions of pounds were spent on parliamentary elections that resulted in an unconstitutional People’s Assembly. Now, with the prospect of holding new parliamentary elections a month after the next constitution is drafted, it is unclear whether Egypt can afford to spend millions of pounds on new elections.  More importantly, will political parties and independent candidates still have the motivation to reorganize their campaigns and raise new funds to run for office again?

Only after the two game-changing constitutional court rulings last week did Egyptians realize – too late – that the transitional roadmap was doomed to failure from the start.  In beginning the transition with a referendum on amendments to the suspended Constitution of 1971 (later promulgated  by the SCAF on March 30, 2011 as the Constitutional Declaration), the interim authorities made the mistake of running parliamentary elections in the absence of a permanent constitution, and under a hastily drafted electoral law that later turned out to be flawed.  Furthermore, the interim constitution put the elected Parliament in charge of choosing a Constituent Assembly to write Egypt’s permanent constitution, guaranteeing that the process would become politicized by partisan infighting. Even before Parliament was dissolved, the constitutional process was in gridlock over a dispute between Islamists and non-Islamists over the allocation of the assembly’s 100 seats. With the dissolution of the legislature, the SCAF now has the power to form a new assembly from scratch if the second constituent assembly falls apart, which would allow the military to intervene freely in the constitutional process to protect its political and economic privileges.

Aside from the SCAF, who is to blame for the perilous state of Egypt’s transition? The liberal political elite bear some responsibility for failing to agree upon a single candidate to back in the presidential election. As difficult as this may seem due to the different ideological backgrounds of those candidates, such an agreement would have helped revolutionary youth retain some hope. Instead they split the non-Islamist vote among five contenders, whose combined share of the vote could have propelled any one of them into the second round. Islamists wanted to hold parliamentary elections as early as possible to take advantage of their superior organization before newer political parties had time to establish themselves.

The Brotherhood certainly did not anticipate that its landslide victory in the parliamentary elections would later be invalidated, but in their eagerness  to hold elections as quickly as possible, they dragged the rest of the country’s political forces down a dead-end road. But the Brotherhood does bear responsibility for failing twice to elect a Constituent Assembly that would be viewed as legitimate and sufficiently representative of the diversity of Egyptian society. The Islamists, lead by the Muslim Brotherhood’s Freedom and Justice Party (FJP), insisted that the Constituent Assembly reflect the political composition of Parliament, rather than the broader makeup of Egyptian society. Thus, the Islamist-dominated assembly chosen in March and the latest one selected last week were both viewed as vehicles for the Muslim Brotherhood’s political interests, rather than neutral and apolitical bodies capable of drafting a constitution reflecting compromise and consensus, and guaranteeing the rights of all citizens regardless of gender, ideology or religion.

Today, Egypt’s transition is being reset from the top. Egyptians will need to draft a constitution to be ratified by popular referendum before we can even start another frenzied election process. Unfortunately, real life is not like rehearsing a symphony until it is played to perfection. In Egypt’s democratic transition, second chances do not come easily. Restarting the transition from scratch comes at a high price in terms of money, instability, and perhaps even violence.  But now that the existing transitional roadmap has been torn to shreds, Egyptians have no choice but to try again – and hope that this time, they get it right.
Sarah Adel Henry has a BA in Political Science from Cairo University.  Photo Credit: Reuters