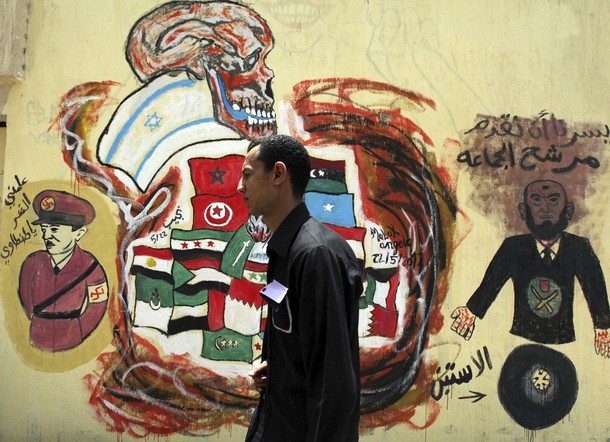 For three weeks Egypt has witnessed presidential campaigning, rallies, debates, and the rest of the paraphernalia of electoral politics. It has seemed as if Egypt is turning from authoritarianism to democracy, but a close look at the process suggests that it continues to be a virtual simulation, lacking the essence of the democratic process.

There is a piece of graffiti on Mohammed Mahmoud Street in downtown Cairo, showing a military officer wearing a cape but with his face replaced by the date 30 June, 2012 – the day set by Egypt’s interim government, the Supreme Council of the Armed Forces (SCAF), to hand power to an elected president.

Many Egyptians believe that the presidential election, starting on Wednesday, will in fact be the last episode in a series of steps, masquerading as a "messy transitional period", intended to guarantee the power of the military regime that has ruled the country since 1952, and not to promote democracy and freedom.

Here are the important questions waiting to be answered in the forthcoming days. Will the presidential election bring stability to Egypt? Will it end the rule of military after 60 years? Is Egypt going to turn into a democratic country?
The answer of the stability question depends on how free and fair the election will be.
There are already doubts of the fairness of some of the procedures put in place before the elections both by SCAF itself and by the Presidential Election Committee.
If the election process sees serious violations – as was so common under the old Mubarak regime – the situation can explode in another round of revolutionary protests. That will especially be the case if Ahmed Shafiq, a former general and Mubarak’s last prime minister, wins.
The main competition will be between the candidates of the ruling military and of the various Islamic "currents". The former rely on the networks of the central state bureaucracy, such as the security forces, the dissolved National Democratic Party, and the beneficiaries of the regime such as business and big families – all those who are seeking to preserve their interests. For them, victory for Mr Shafiq, or for Amr Moussa, Secretary General of the of the Arab League and former Minister of Foreign Affairs, would be a success.
On the other hand the Islamists rely on networks of Islamic religious institutions, which despite its secular image ballooned during the period of military rule after 1952. Their most prominent candidates are Mohammed Morsi, a candidate of the Muslim Brotherhood and Abdulmoneim Aboul Fotouh, a renegade former Brotherhood leader who promotes himself as moderate but is also backed by the ultraconservative Salafists.
The question is which of these two institutional machines can capture the so-called "Sofa Party", those never before concerned with politics.
Over the last year and a half, these "average citizens" have become fatigued by the absence of security, and the economic crisis. They are worried by the collapse of the state, and cannot afford the consequences.
For these there is no place for risk: slogans of freedom and democracy are not the top priorities of the more than 40 per cent who are illiterate and the more than a half the population dependent on subsidies for their daily lives.
These voters with low awareness and high life burdens were obvious targets during the parliamentary elections for the Islamist parties, who played on their religious sensibilities and their daily needs. This time the same voters are targets for the old regime propaganda machines, telling them that Mr Shafiq, with his military background, is the best candidate to bring stability.
This contest of machine politics, leading to another general in office, is not what the revolutionaries who filled Tahrir Square in February last year had in mind. And it is not clear that, once the results are known, they will stand for it. There is a long way to go before Egypt’s "democratic transition" plays itself out.
Magdy Samaan is a journalist working at the Daily Telegraph’s Cairo bureua. He was a 2011 Visting Fellow at the Atlantic Council’s Rafik Hariri Center for the Middle East. Mr. Samaan has previously worked as a correspondent for the Egyptian independent newspapers Al-Shorouk and Al-Masry al-Youm as well as Al Jazeera, reporting on politics, religious minorities, and US-Egypt relations.
This article was originally published by The Daily Telegraph.
Photo Credit: Reuters