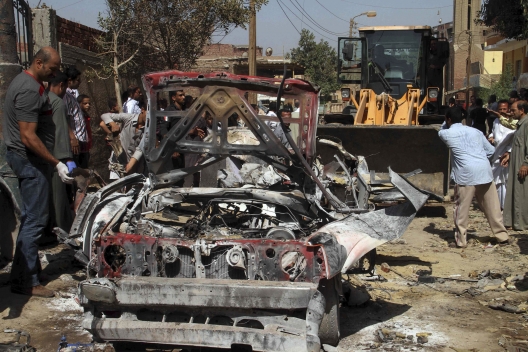 Just over two weeks after a devastating terrorist attack, which left thirty-one Egyptian soldiers dead, reports surfaced of an unprecedented, mysterious naval attack 40 kilometers north of Damietta. According to official statements, eight sailors are “missing,” likely drowned in the Mediterranean Sea after clashing with unidentified armed terrorists on board of four small boats. Five navy soldiers were wounded in the same attack, according to the Army Spokesman Colonel Mohamed Sameer, and thirty-two people on board of the boats attacking the Army were arrested on the spot.

Adding insult to injury, the most active terrorist group in Sinai, Ansar Bayt al-Maqdis (ABM), released a 30-minute video a few days later providing footage of the October 24 attack in which the thirty-one soldiers were killed. It included a recording of masked terrorists chasing unarmed soldiers and shooting them down. The checkpoint had already been destroyed by a suicide car bombing. The camera shooting the video was placed on top of a machinegun, confirming the advanced nature of the attack, and the importance terrorists have placed on promoting their own propaganda.

Near the end of the video, a soldier stripped to his underwear is seen sitting on the ground, terrified, surrounded by dead bodies. Ignoring his pleas, the terrorists fire several shots at him. The soldier has clearly been killed, but they continue to shoot at his lifeless body. The video continues, showing terrorists freely moving around the checkpoint, shifting the corpses of the dead soldiers with their boots, showing blood-stained faces. Another shot shows bodies of several soldiers piled on top of each other.

The terrorists then displayed two tanks seized at the checkpoint, and a large cache of weapons, including machine guns, grenades and army uniforms as trophies. One masked terrorist later jumped on top of a tank, waving the black flag of the Islamic State of Iraq and al-Sham (ISIS). An unidentified man later delivers a nearly eight minute speech, with the seized weapons in the background. His key message was that this is the only the beginning, and more attacks are to be expected, in revenge for members of the group who were killed, or currently in prison.

Along with gory footage at the checkpoint, the almost-professionally made video also included a recently leaked video of army soldiers allegedly beating and torturing two blindfolded men arrested on charges of involvement in terrorist attacks, as well as pictures of suspected terrorists shot dead by the army. This was a clear attempt to provide justification for their own attacks, and the unidentified speaker repeated his warning to young Egyptian men that they should not join the army and take part in its war in Sinai.

While most of the coverage and comments on the video centered on the merciless, inhumane and brutal killing of young conscripts, who were simply fulfilling their compulsory military service, the video also included a significant announcement by ABM. The group declared that it decided to rename itself “Welayet Sinai,” or the “State of Sinai,” confirming reports of ABM’s decision to swear allegiance to ISIS leader Abu Bakr al-Baghdadi. In an earlier recording, al-Baghdadi said that his group now has supporters in Egypt, Saudi Arabia, Yemen, Libya and Algeria. While ABM has been mostly active in Sinai, launching guerilla warfare against the Egyptian army, its decision to join ISIS opens the door for possible major terrorist attacks all over the country, possibly by non-Egyptian members of the group.

Further deepening fears that ISIS has quickly put into practice its threat to increase its activities in Egypt, was the appearance of yet another video in which five, masked well-built men, also with the ISIS flag in the background, claimed responsibility for the naval attack. One of the men, whose voice was clearly distorted to hide his identity, alleged in what appeared to be a non-Egyptian accent that “as we speak, one of our units will be carrying out an unprecedented operation, and seizing an navy ship that belongs to the army of the infidels [Egypt], to use it to take over another Israeli army ship in order to force the release of our brothers in prison.”

Egyptian security officials were initially tightlipped, but the ministry of interior later announced that “foreign intelligence bodies” were behind the attack. Some reports speculated that the terrorists involved in the attack came from Libya, while others claimed they belonged to Hamas, the militant Palestinian group.

The little information that was released by the army spokesman on what exactly happened at the Mediterranean Sea opened the door wide to speculation and conflicting stories. The army’s version of the story was that armed men in small boats attacked the navy ship after sending a false emergency rescue signal. The army spokesman added that the navy immediately used nearby ships and helicopters to attack the smaller boats and made thirty-two arrests.

However, a week after the attack, 26 of those arrested by the navy were released, and authorities confirmed assertions by their families that they were simply fishermen carrying out their daily jobs and happened to be near the spot in which the incident took place. Residents of the small town of Ezbet al-Borg in Damietta have been holding small demonstrations in front of the Governorate’s Building asking for the release of the remaining sixteen fishermen.

Adding to the mystery of the dangerous incident were widely circulated, conspiratorial reports, including in the daily Al-Masry Al-Youm, that army intelligence was investigating allegations that the commander of the navy ship, Ahmed Mostafa Amer, had deserted and joined ISIS. The officer allegedly shot his colleagues, and wanted to use the navy ship in another terrorist attack. But that attempt was allegedly foiled when the Egyptian army and navy ships and helicopters bombed Amer’s navy ship, the reports allege.

Al-Masry Al-Youm quoted security sources saying that Amer was not the original commander of navy ship, and that he replaced another officer, Mohamed al-Fugeiri, who was wounded in a car accident a week before the attack. The newspaper reported that intelligence bodies were investigating whether Fugeiri’s accident was a coincidence, and added that the navy commander in Damietta also decided to cancel a ceremony that was due to be held in honor of Amer’s father, Mustafa Amer, a senior navy officer, after his retirement as director of Damietta Harbor. This information has not been independently confirmed, nor has it been denied by the Egyptian army spokesman.

Several retired army generals, who spoke to the media as military and strategic experts, were quick to warn that the two recent attacks in Sinai and Damietta, and the release of the video of the checkpoint attack, aimed to shake the confidence of the Egyptian public in their army and to claim that it was unable to confront terrorist groups.

“The release of this awful video came after the army launched several successful attacks against ABM in Sinai,” said retired Major General Talaat Moussa. After the October 24 attack, the army has been carrying out near-daily operations in the Rafah area in Northern Sinai across the border with Gaza, killing and arresting dozens of suspected terrorists. The crackdown against suspected terrorists in Sinai included the forced removal of hundreds of families living along the border with Gaza, and the demolition of their homes, creating a security buffer along the Gaza border. “Terrorists cannot move freely at all right now in Sinai,” said Moussa. “That is why they released the video to claim that they are still alive and not crushed by the successful army operations,” he added.

On Sunday, the Army’s Public Affairs Office also released its own, nearly five-minute video, in a clear response to the ABM video. The video displayed some of its most advanced weapons, including tanks and helicopters, carrying out military operations in Sinai. The video showed footage of army soldiers arresting blindfolded suspected terrorists, and treating them humanely, also likely a direct response to the ABM video showing soldiers beating local residents in Sinai.

ABM’s declaration of allegiance to ISIS poses a significant threat to Egypt’s security, considering the group’s advanced fighting skills developed in real wars in Iraq and Syria, and diverse background of its members. On home soil, the two daring terrorist attacks in Sinai and Damietta, and a near daily string of lesser attacks carried out by small groups that police claim are linked to the Muslim Brotherhood, imply that violence is likely to continue in Egypt for some time to come, defying official statements that the security situation is under control.

Image: Photo: The remains of a wrecked car is seen after an explosion in Giza July 30, 2014. Three people were killed in the car bomb blast in Giza, on the outskirts of Cairo, Egypt's state-run Nile Television said on Wednesday. Another state news outlet, Al-Ahram, quoted a police officer who said those killed were inside the car and were likely to have been on their way to carry out a "terrorist operation." (Reuters)