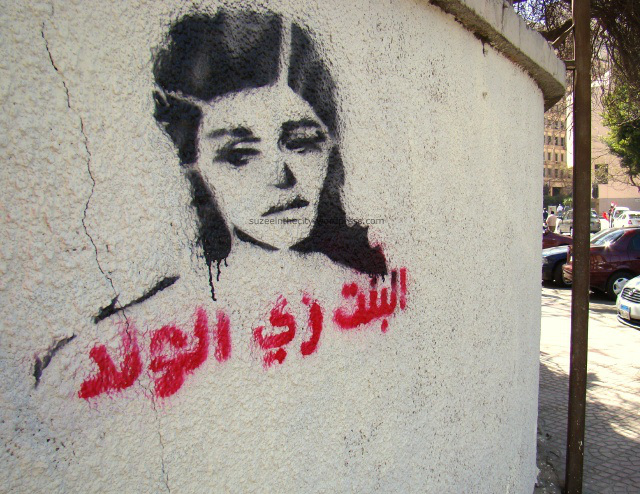 The past two years of street art in Cairo have been a fascinating narrative of the political and social turmoil of Egypt since January 25. Graffiti artists have documented the uprisings and downfalls beset upon our society, depicting the struggles of those without a voice. One interesting thread to follow is the narrative of Egyptian women since the revolution: street artists in Cairo, most of whom were men, took on the cause, advocating for women’s rights, shedding light on the injustice and violence suffered by women, and paying tribute to the brave women fighting for equality in post-revolutionary Egypt.

This graffiti was created by Bahia Shehab, a Lebanese-Egyptian historian who gave a beautiful talk at TEDX called ‘A Thousand Times No’.

The blue bra was a turning point in our history as women in Egypt, where a woman was brutally dragged, beaten and stamped on by soldiers in November 2012, her abaya torn from her body exposing her blue bra. Egyptian media and society’s reaction to this shocking video was in itself horrifying- a witch hunt of sorts began in an attempt to expose the identity of this victim, so-called religious figures and TV pundits like Khaled Abdallah questioned her morality and insisted that she deserved the beating.

The more kindhearted referred to her as Set El Banat, deploring the term Blue Bra as too vulgar a connotation to give a victim of police beatings who deserved to remain anonymous. This terminology and mindset, however, must change; our language needs to become more vulgar, our reports on sexual and physical violence need to become more blatant, more shocking; you need to provoke a reaction in the public consciousness, otherwise we will brush it over and the incident fades into our collective subconscious.

This is typical of a traditional, patriarchal society, where a victim  suffers from public humiliation and a lack of legal support. The fact that a man offered to marry the blue bra girl to retrieve her lost honor, implicitly proved this societal endemic, where she would only be re-assimilated by entering a marriage of charity. A man took away her dignity, so another man must restore it.

The blue bra is vital to this narrative because it proves that there is clearly a trend of continuous targeting of women in protests by the authorities to punish them for their political participation, thus marginalizing them. Orchestrated and targeted violence against women also occurred under Mubarak’s rule in 2005, where women in an anti-Mubarak protest were beaten and sexually assaulted, and under the military rule in 2011, the blue bra woman was one of many brutally beaten women.

The blue bra incident had a profound effect on the protest movement; many women no longer felt safe in Tahrir; brothers, fathers and husbands refused to let their female relatives participate in protests because they knew they couldn’t protect them against armed and violent soldiers.

The perpetual failure of the Prosecutor General to investigate the cases of rape and violence against women – despite the abundance of evidence and testimonies- over the past seven years shows impunity, proving that the state is complicit – either in its silence or in its involvement – in supporting violence against women.

These images are  different from the ones we saw coming out of Tahrir during the eighteen days:  brave women at the front-lines, confronting tear gas and bullets, side by side with their male contemporaries. Street artists of Cairo paid tribute to the fierce courage of the Egyptian women, portraying them as women in mourning carrying arms to protect themselves:

As Nefertiti with a gas mask, a symbol of our history and heritage but also of our battle power:

As a woman holding a gasping man in protests: ‘during battle, I will be by your side protecting you’, the inscription reads, a tribute to the often underestimated support, solidarity and dedication of female protesters and political activists:

Egyptian women were among the 150 protesters shot in the eye by central security forces during the Mohamed Mahmoud clashes of late 2011. Ammar Abo Bakr created a mural of the victims, portraying them straight faced and unblinking, brave and determined despite their injuries:

Perhaps the most pivotal, most evocative street art in Egypt’s recent history is the martyrs’ mural on Mohamed Mahmoud Street, where Ammar Abo Bakr and his friends painted a mural of the mourning mothers of the martyrs carrying their dead sons’ photographs:

The message read ‘Forget who passed and focus on the elections’:

The mural was made during the lead-up to the presidential elections in 2012 where the Port Said massacre case was continuously delayed and public interest began to fade, leaving the families of the 75 young martyrs without justice or closure.

Here graffiti provides an alternative platform, not only to speak on behalf of those who are ignored, but also to speak directly to the state, to the people on the street, to embarrass us out of our nonchalance and amnesia, and force us to focus on the bigger picture: people have died and continue to die and the state does nothing to save them, protect them, or bring the criminals to justice.

Street artists have portrayed women as the faces of the destitute and the poor, the millions of Egyptian without access to uncontaminated running water or proper healthcare, standing in gas queues, fighting over molding bread, ignored and disenfranchised by their state.

Their art paid tribute to the iconic women of Egypt: artist El Moshir used cinema icons of the past Soaad Hosny and Laila Mourad in campaigns by feminist advocates for equal rights. ‘A girl is as equal as a boy’. Women are the face of the revolution,

They carry the gracefulness of dancers

The sexualized Lady Justice who is a belly dancer with a military beret, a reference to the military’s control of the judicial system.

Artist Amr Nazeer paid tribute to Iman Salama, a sixteen year old   shot dead by her harasser after she confronted.  Eyewitnesses and journalists received death threats from the man and his family, yet another example of how in the complete absence of law, the perpetrators become more brazen in their assaults, and the victims are never safe.

The attacks have escalated into horrific gang rapes in Tahrir, with 25 cases reported on January 25, 2013 alone. Many more presumably went undocumented. The testimonies of women that have since been released are terrifying in their details of merciless mob violence. Mira Shihadeh’s mural against sexual harassment became the icon for online campaigns against sexual assault by Op-Anti-Sexual-Harassment and several other online platforms.

Her friend Zeft created a poster of Nefertiti with a gas mask on surrounded by splatters of blood.

the image spread across the world used by anti-sexual harassment activists in London, Stockholm, Washington DC and Gaza. Zeft made the poster as a tribute to the brave female protesters of Tahrir, and added the blood as a form of protest against the horrific sexual assaults they had suffered.

This lack of accountability brings us back to Samira Ibrahim.  When the military examining doctor Ahmed El Mogy was exonerated of all charges of rape against her in 2012, the ruling may also have had an aftereffect on society; the thought permeating itself into our subconscious that no man will be guilty of rape, even in as high profile case as Samira’s: not only can men do it; but the law will be on their side.

Though Samira lost her case, she did bring about significant change; women who were arrested and held in military jails after her case reported that they had not been touched by military doctors, proof that her highly publicized campaign had a positive effect. In this graffiti, Ammar Abo Bakr pays tribute to her as a true fighter and a real feminist icon.

Graffiti offers a historical narrative where the media and state have failed, it documents turning points in our lives that are currently being censored and deleted, rewritten for the history books by the regime. Even if the official narrative will show the future generations a completely sanitized version of our past, graffiti will remain true, because its artists are committed to the social cause of freedom, equality and social justice.