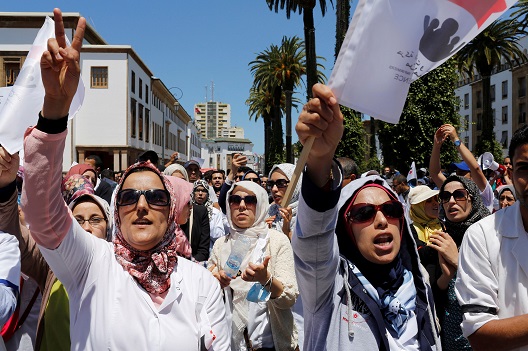 Despite Morocco’s many legal advances in women’s rights, its lack of effective implementation and the existence of legislative loopholes undermines its reputation as an open, tolerant, and progressive country. In recent months, Morocco’s human rights record has come under the scrutiny of international organizations, notably the UN Human Rights Council latest UPR. Morocco’s questionable human rights—and specifically, women’s rights—abuses are a liability to its role as a US ally, a relationship that offers trade, investment, military, and diplomatic benefits to the nation.

While its North African neighbor, Tunisia, is receiving praise far and wide for overturning a law that banned women from marrying non-Muslims, Morocco is facing intense scrutiny for its crackdown on Rif protesters as well as government responses (or lack thereof) to recent, highly publicized cases of sexual harassment against women. In order to solidify its international, and more specifically, US, standing as a ‘progressive’ Arab ally, Morocco cannot allow its human rights record to become a liability.

Progressive trends in the written law

Morocco’s position as a Western ally and a regional leader in women’s rights is based on its legal protections for women. In recent years Morocco has taken substantial steps to establish parity between the sexes in constitutional, family, and criminal law on the books. Feminist civil society and non-governmental organizations, composed mainly of educated, urban women, have been at the forefront of organizing and lobbying in favor of these reforms.

The 2011 Constitution guarantees equal protection and enjoyment of its laws for both men and women. The country’s progressive Family Law (Moudawana) secured important rights for Moroccan women, including the right to self-guardianship, the right to divorce, and the right to child custody. The legal marriage age changed from 15 to 18 years of age, and women are no longer required to have a male guardian approve their marriage. The criminal code has taken strides against acts of gender based violence, cracking down on non-partner sexual assault and repealing the rape marriage law, which allowed a rapist to evade punishment by marrying his victim.

However, some legislative gaps persist with disparities between the laws on the books and in practice. Some protections afforded under the 2004 Moudawana are left open to interference by gaps in the legislation, notably the prohibition on early and forced marriage which may be permitted through judicial waiver. While non-partner sexual assault is effectively addressed, marital rape is still unrecognized. Sexual harassment in public spaces is largely unchecked, with the current law defining harassment only in terms of employer-employee exchanges.

While feminist groups work to push legislative standards towards equality, conservatives in civil society organizations, judicial institutions, and society fight to limit the legislation and its effects.

Some of the key barriers to effective implementation include: judicial oversight and accountability; progressive legislation by formal and informal justice mechanisms; police enforcement; legal aid and information. Judges, particularly older judges and those in rural regions, use their discretion to permit waivers for early marriage and to restrict female-initiated divorces, among other new rights. If a women obtains a favorable resolution, there is no guarantee that the decision will be enforced.

Social and cultural barriers form other key barriers for women’s equality and inherent rights. Economic needs and social traditions tend to favor antiquated female roles as early brides and domestic workers. Education and literacy among girls is still not valued. The key informant interviews conducted for this context analysis revealed that there are many social pressures in Morocco to resist change in gender justice, and these pressures are greater in rural areas. There is a sharp social divide in Morocco whereby young urban women along with civil society organizations are using their newly afforded rights and pushing for greater equality, while older, religious, and conservative rural populations stand as a barrier to effective implementation.

Despite Morocco being party to several international law conventions and acknowledging the precedence of international instruments over national legislation, the 2017 UPR Review by the UN Human Rights Council noted several problems in its evaluation of Morocco’s human rights record, partially because of gender bias.

Morocco is not only bound to adhere to international standards on gender equality based on its ratification of several treaties, including the International Covenant on Civil and Political Rights (ICCPR) and Convention on the Elimination of Forms of Discrimination Against Women (CEDAW), but also under domestic law.

For the first time, in its newly reformed 2011 Constitution, Morocco declared the country’s adherence to universally recognized human rights and affirmed the preeminence of international law over national legislation. As a monist state, international treaties are automatically part of domestic law, once published in the Official Bulletin, without requiring an implementing law. In accordance with its constitutional provisions, this makes all treaties to which Morocco is party the supreme law of the land.

Since ratification of CEDAW in 1993, the Moroccan Government has submitted progress reports on the Convention to the United Nations, each showing progress towards reforming the legal code and improving the status of women. Some reservations, such as to Article 9 of CEDAW, deal with the right of a mother to transmit her citizenship to her children, have already been abandoned, there remain apparent delays in enforcing these provisions nationally.

Not only is the government legally obliged to protect women from discrimination, it also has the power to promote progressive social change. King Mohamed VI advocated a gradual approach for empowering women and, as such, supported the transformative power of the law.

The gradual change approach to implementing women’s rights laws employs ‘constrained legalism’, requiring that laws be deployed in a way that is ‘neither utopian in its hopes for legal reform nor rejectionist in its dismissal of legal avenues of transformation.’ The gradual change approach is an attempt to balance the split in the nation between those who emphasize the universality of human rights and those who call upon a more culturally specific, if not an ‘authentic’ approach to rights and freedoms.

Would applying a more rigid reading of the law disrespect and violate the will of the people? And would a more relativist reading of the law strip individuals of their rights? Currently, there is no clear consensus among the population on what they wish the law to be. This divide is played out between feminist groups, Islamists, and conservatives who seek to define the modern national identity.

For Morocco to harness the transformative power of the legal reforms through a more universal application of the law, strengthening the formal justice system is key. Inadequacies within the justice sector need to be addressed including high costs, lengthy proceedings, and corruption. Improved record keeping and mechanisms for oversight can address several of these limitations. Legislators should also seek to close the gaps in the law that permit the extensive use of discretion that eliminate provisions or specific judicial bases. The government should also take significant steps to improve the training of judges and traditional leaders with regard to: basic principles of fair trials; the specific rights and obligations under national and international law; and the particular needs of women and other vulnerable groups.

However, without addressing the social and cultural barriers that keep women from seeking judicial remedies, even transformative legal reforms will not be sufficient to empower women. Implementing a program on legal literacy could have substantial benefits regarding women’s legal and social empowerment. To utilize the power of legal literacy, it must be implemented in a way that reaches all Moroccan women. Thus, awareness building in various locations in both Arabic and Amazigh dialects is needed. Consideration to the medium that is most effective at communicating information is required where basic literacy and access to technology vary substantially across geographic regions.

Legal aid is one way in which the government can address lack of information, legal literacy, and engagement with the legal system for women. On the legal aid front, successful pilot legal aid projects founded upon a strong partnership is key among the bar, the judiciary, social workers, CSOs, and universities. Law faculty and students serve as valuable civil legal assistance providers through clinical programs. Legal aid clinics constitute a highly effective, successful, and increasingly global means of combating the lack of access to justice for marginalized populations throughout the world.

Morocco has the ability and opportunity to improve the conditions of women, fulfill their international and domestic laws and values, and to nurture its beneficial alliance with the United States and the Western world, more generally. Through the transformative power of legal formalism, the implementation of the reforms at ground level has the capacity to empower women.

While social realities must be considered by legislators, the law has an educational function and sets norms for what society thinks is right and what’s wrong. Patriarchal gender relations are ripe to be addressed through this function of legal reform and must be addressed collectively by the government, the judiciary, local leaders, the media, civil society, and educators. Failure to do so hinders the law from affecting meaningful change.

Danielle Hites is a legal analyst for the Alliance for Rule of Law Promotion & Alternative Dispute Resolution and has a JD from Boston University School of Law.

Leila Hanafi is a Moroccan-American international development lawyer with the United Nations and the principal of the Alliance for Rule of Law Promotion & Alternative Dispute Resolution in Washington DC.

Image: Photo: Moroccan healthcare staff shout slogans during an anti-corruption protest near the parliament in Rabat, May 12, 2017. REUTERS/Youssef Boudlal