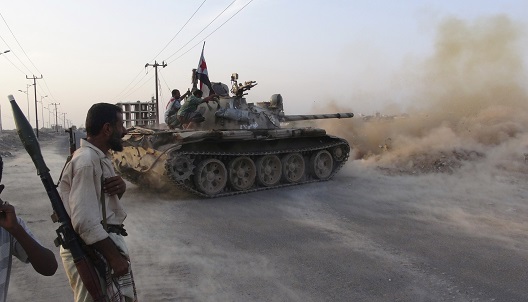 Members of the Southern Resistance Committees man a tank during clashes with Houthi fighters. (Reuters)

It has now been more than a year since Ahmed Ashulaif, a distinguished fifty year-old businessman and tribal leader from Marib, put his business on hold. Since then, he has fought to stop the Houthis, a Zaydi-Shia rebel group that took control of Yemen’s capital and ousted its government in September 2014. Fearing Houthi control of his oil-rich province in central Yemen, he and the tribes from Marib clashed with Houthi militias in late 2014 as the rebel group reached the province’s outer edges. An uneasy truce brokered in August that year brought the clashes to a halt, but like most of those brokered by the Houthis, the ceasefire did not hold for long. For Alshulaif, the ensuing battled has become an existential fight for survival.

In late March 2015, a Saudi-led coalition of ten countries launched an intense airstrike campaign in Yemen. Their stated goal was to force the Houthis into a surrender and reinstate President Abdrabbo Mansour Hadi, who twice fled from the Houthis: first from house arrest in Sana’a to the southern governorate of Aden in February, and then on to Saudi Arabia after the Houthis tried to take Aden by force. As the air strikes continued, the Houthis intensified their efforts to consolidate their control over the country in an attempt to strengthen their position.

Despite their calls for negotiations, the Houthis tried again to push into Marib in April. Heavy fighting broke out between local tribes, backed by a handful of soldiers loyal to the ousted President Hadi, and Houthi militias fighting alongside elite military units aligned with Yemen’s former president Ali Abdullah Saleh. Unofficial reports suggest that hundreds have died in the fighting. Alshulaif has lost thirteen family members in the fight, including three of his brothers and five their sons. His family has fled to the desert in the outskirts of Marib city along with thousands of other Yemenis displaced by the war.

The fighting is just the latest indignity to be piled on to Marib, Ashulaif says bitterly. Even before the Houthis arrived on the province’s western border, power brokers in Sana’a did little to ensure basic services to a region that produces almost half of the country’s oil, all of its gas, and most of its electricity. Despite its wealth in resources, Marib is one of the most impoverished parts of Yemen. Tribesmen in the area say that repeated attempts to negotiate with the Houthis hoped to preserve stability in Marib and ensure the flow of these resources to protect Yemen’s already fragile economy. Sadly, these negotiations failed. A parliamentary committee brokered a deal with local authorities and tribes in January, but Houthis declared Marib a strategic goal that they would take by force if not surrendered.

“Marib brings revenues, oil, gas, and electricity to the country,” says Alawai Albasha, a prominent tribal leader from Aljedaan tribe participating in the fight against the Houthi incursion. “We tried to convince Houthis and Saleh to spare Marib the conflict so that these services continue to flow, but they were determined to invade us. Now we have no choice but to fight. We will not allow tribesmen from Saada, Amran, and Sana’a [northern governorates] to control our territory and insult us just like did in other places they grabbed.”

The tribes are under-resourced in the face of a fighting force with access to tanks, mortars, and other heavy weapons, and have struggled to organize themselves into a unified military force. They are desperate for support from Saudi Arabia to curb Houthi advances. At least two of the major five tribes in Marib have expressed support for the Saudi-led military intervention, recognizing that without help the Houthis and Saleh loyalist military units would eventually break them. If they were to surrender, the majority-Sunni tribes in Marib also believe that Houthi control of their areas would invite terrorism and sectarianism, weakening an already frayed social order. They look with concern at the nearby Bayda governorate, which fell under the Houthis’ control in October 2014, where frequent clashes have broken out between local tribes and Houthis—resulting in an alliance between the tribes and al-Qaeda.

Many have written about the regional and sectarian dimensions of the conflict in Yemen. At the local level, however, the increasingly lengthy and destructive conflict engulfing Yemen’s tribes has not affected their basic pragmatism—a calculus independent of religious or geopolitical loyalties to any one group. Rather, the tribes in Yemen will do what they have always done: ally with those best equipped to help protect tribal lands. That could change, however.

The Houthi entry into Marib could open the doors to a protracted civil war and mounting opportunities for Iran and Saudi Arabia to work through proxies, not only providing a catalyst for the violence but also strengthening its sectarian dimensions. Already the Saudi training program for Marib tribesmen signals a first step in coopting the anti-Houthi resistance, which may prompt Iran to increase its support for the Houthis and escalate the already devastating conflict. This dynamic will create new opportunities for extremist groups like al-Qaeda, especially if the tribes resort to forming an alliance with the militant group to push the Houthis out of their territories—a scenario that is already a reality in al-Bayda.

Nadwa Al-Dawsari is a Nonresident Senior Fellow at the Project on Middle East Democracy. Follow her on Twitter: @ndawsari