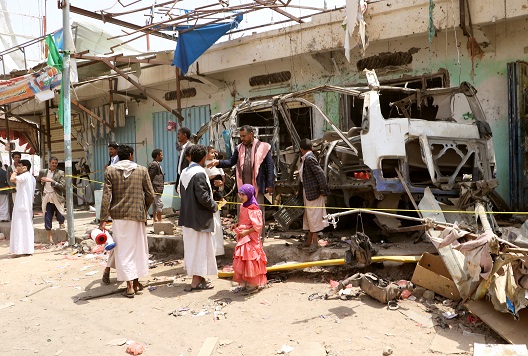 For the past seven years, this writer has viewed the Syrian uprising largely through the lens of civilian protection, because civilian slaughter has defined the conflict and dictated its dire political consequences. Although one may ascribe vastly different motives to the President of Syria on the one hand and the leaders of Saudi Arabia and the United Arab Emirates on the other, war in Yemen is producing similar slaughter that may, if left unaddressed and untreated, haunt the combatants and their external supporters—led by the United States—for decades to come.

From the beginning—in March 2011—the regime of Bashar al-Assad saw state terror as the key to its survival. It would lethally target demonstrators to end peaceful protest; it would “disappear” credible, non-sectarian opponents while releasing Islamist criminals from its jails; it would pound residential neighborhoods with all weaponry at its disposal to “cleanse” rebel-held areas and to try to separate unarmed civilians from armed insurgents; it would commission detention facilities employing practices of the Third Reich and the Soviet empire; and it would authorize “elite” army units to loot humanitarian convoys trying to bring medical and nutritional relief to civilians under regime siege. All of this has been supported by Russia and Iran.

American officials down through the years have decried and condemned this wanton criminal behavior. Indeed, President Donald Trump has not been at a loss for words about Assad. Officials have spoken with heat and eloquence, and not only because of the human costs Assad has deliberated exacted.

Even the Obama administration could see the political consequences of Assad’s appetite for mass murder: Turkey, Jordan, and Lebanon hosting millions of refugees; Western Europe going populist and even nativist during the 2015 migrant crisis; and Islamist extremists of the al-Qaeda and ISIS (ISIL, Daesh, Islamic State) variety establishing themselves (with regime help) in Syria and harvesting a recruiting bonanza with the help of a regime desperate to prove the falsehood that its enemies were terrorists. And now the Trump administration and European allies face a blatant Russian campaign of blackmail: funnel reconstruction money into a kleptocratic regime, or refugees will not be repatriated.

Yemen too is a place where the protection of civilians has taken a back seat to political agendas. Yemen now rivals and even surpasses Syria as a humanitarian abomination. Intervention by the leaders of the West is long overdue in putting an end this ongoing catastrophe. The recent Saudi air strike on a school bus—killing, maiming, and traumatizing children—should serve as a wake-up call, if one is needed.

Are Saudi Arabia and its Emirati partners, like Assad, deliberately targeting civilians to benefit politically from terror? Is the assistance of the United States abetting something like what Tehran and Moscow abet in Syria?

The view here is that criminal motives do not play a role either in the conduct of the military campaign against Houthis or in measures supporting it. And motivation is no small matter: one need only examine aerial campaigns against civilians in Aleppo and the Eastern Ghouta to see the consequences of deliberate civilian-centric warfare waged by parties consciously targeting marketplaces, mosques, hospitals, and schools, with weaponry both modern and crude. A barrel bomb off-loaded from a helicopter hovering over a marketplace erases all doubt as to motive, as do “double tap” strikes on rescue workers combing through the rubble.

Yet even if Saudi Arabia, its ally, and its supporters are not deliberately targeting civilians, what practical difference is perceived by Yemenis on the receiving end of high explosives, nutritional shortfalls, and medical deprivation? Will they be reassured and comforted to learn that perhaps incompetence, carelessness, and bad intelligence—rather than deliberate design—account for their unspeakable suffering? And without for a moment discounting the monetary resources being dedicated by Riyadh to Yemeni humanitarian assistance, is anyone in the Kingdom calculating the possible long-term costs (reconstruction, chronic instability, Yemen as a permanent host for terrorists) of this horrifically destructive military campaign?

No, this is not an apologia for the role of Iran or the bloody-mindedness of the Houthis. Tehran has meddled expertly in Yemen, provoking a Saudi response that encourages the Islamic Republic to apply to the Kingdom classical Persian racist themes about Arab savagery, themes picked up and amplified by Iranian apologists in the West. The steep public diplomacy hill facing the Saudi Kingdom gets no flatter given the consequences to civilians of its military campaign in Yemen. Saudis and Emiratis may protest all they want about the defensive nature of their joint undertaking. The pictures, however, give aid and comfort to Iran. And they enable Assad and his apologists to offer justification of sorts for their war on “terrorism” inside Syria.

Neither is this an attempt to downplay the national security importance of Yemen to Saudi Arabia and its Arab neighbors. Rather it is a plea for Western—especially American—intervention mandating a different methodology for resolving this crisis, one pursued diplomatically on the basis of internal Yemeni politics. Those Western leaders for whom grotesque human suffering is merely an unavoidable cost of doing business should see and fear the specter of a prostrate, hollowed-out, dead Yemeni state hosting al-Qaeda in perpetuity. They should act now.

Last December, President Trump called on Saudi Arabia to take specific steps to address the humanitarian catastrophe in Yemen. What is needed now is bold American leadership to stop the military campaign cold and get this crisis firmly on a political track. There is no substitute for hard talk involving the American president, his national security team, and their counterparts in Saudi Arabia, and the United Arab Emirates.

Perhaps the President could also consult personally with the United Nations Special Envoy for Yemen—British diplomat Martin Griffiths—and direct the American interagency to devise concrete steps to support Griffiths’ mission. And even though the United States is represented ably by accomplished, professional charges d’affaires in both Saudi Arabia and the United Arab Emirates, the absence of senior, influential American ambassadors enjoying direct access to Saudi and Emirati leaders and to President Trump is beyond regrettable.

Despite no ambassadors, the United States has gone far to reestablish relationships of trust and confidence with Saudi Arabia and the United Arab Emirates; relationships frayed by the Obama administration’s focus on an Iran nuclear deal and the methodology it used to get it.

That trust and confidence must now be fully employed to end massively gratuitous civilian suffering that will, if left unattended, produce unintended and long-lasting political results desired by no one in the Kingdom, the Emirates, or the West. Syria has already provided a case study of the dire political consequences of the West making civilian protection something between a secondary and non-issue. One need not ascribe criminal motives to the leaders of Saudi Arabia and the United Arab Emirates to conclude that the United States must take the lead in ending this abomination, and ending it now.

Ambassador Frederic C. Hof is former special adviser to the secretary of state for transition in Syria and current nonresident senior fellow with the Rafik Hariri Center for the Middle East. He also is currently a faculty member at Bard College.

Image: Photo: People gather next to the wreckage of a bus at the scene of Thursday's air strike in Saada province, Yemen August 11, 2018. REUTERS/Naif Rahma