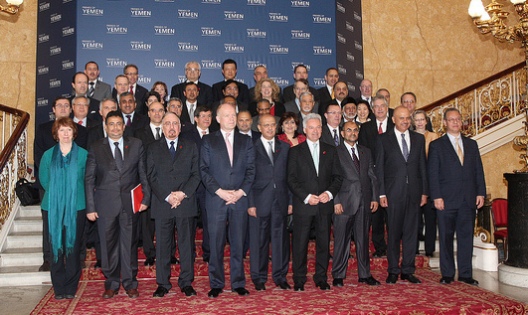 While most attention at the U.N. General Assembly this week is focused on Iran and Syria, the Friends of Yemen group will hold its sixth ministerial meeting on the sidelines. It will be an opportunity for the government of Yemen to hold donors accountable for pledged money and for donors to hold the Yemenis accountable for promised reforms. It is easy to overlook Yemen in the midst of a potential handshake between the American and Iranian presidents, but this is a pivotal moment in the country’s transition process that necessitates continued U.S. and international attention. Yemen’s friends and allies should take this opportunity to think creatively and strategically about the next steps in Yemen’s transition process and formulate long-term, sustainable policies that will help Yemenis achieve the aspirations of the 2011 uprising — greater economic opportunity, social justice and dignity, and an end to pervasive corruption.

Yemen is poised to complete its National Dialogue in the coming weeks — delayed only slightly beyond the September 18 deadline — which culminates months of work to hash out the country’s most contentious issues among 565 delegates representing a cross-section of Yemeni political life. The dialogue has fostered an environment of robust debate, integrated women and youth voices, and upended cultural norms where tribal sheikhs always have the upper hand. While the military rears its authoritarian head in Egypt and the Assad regime continues its indiscriminate slaughter of civilians in Syria, Yemen’s slow and steady progress to implement a peaceful, negotiated political transition deserves real recognition.

At the same time, the completion of the National Dialogue should not be a free pass for the international community to congratulate itself, close up shop, and move to the next crisis. The real hard work of the dialogue is yet to come. Translating the decisions of the dialogue’s nine working groups into concrete policy, legislative change, administrative reform, and a new constitution will take considerable effort — and left to its own devices, the transitional government in place is unlikely to move aggressively. This is where ongoing involvement of the United States, Britain, the United Nations, and other international supporters is absolutely essential. The Gulf Cooperation Council (GCC)-brokered agreement that paved the way for former President Ali Abdullah Saleh’s departure and a power-sharing arrangement among the leading political parties did little to change the underlying power dynamics and merely shifted the composition of elites in decision-making positions. The National Dialogue was designed to bring in marginalized groups and new voices to the political process, but unless concerted efforts are made to sustain their involvement, the status quo will likely return where powerful figures resist change that might jeopardize their vested interests.

Yemen’s progress should be noted and congratulated, but U.N. envoy Jamal Ben Omar’s recent statement that 90 percent of the dialogue’s work had been completed is a vast overstatement. The end of the dialogue hinges upon agreement within the Southern Issues Working Group and consensus on the very shape of the state (a two-state or multi-state federal system); this is the most important issue at stake and faces an uphill climb to finding consensus. Saleh is meddling in these negotiations and delegates representing the former ruling party, which he still leads, have refused to give their support to the final report. The dialogue’s Conciliation Committee will likely reach some kind of agreement, but most worrisome is that the vast majority of Southerners still reject the very premise of the National Dialogue and the decisions reached therein. If the dialogue is completed, and the country moves to a constitution-drafting process and elections also rejected by a large segment of the South, then where does that leave the country and its prospects for stability?

When asked, diplomats and other internationals engaged in Yemen acknowledge this is a significant concern, but underestimate the impact of such a rejection and the potential for renewed conflict. For some, completing the dialogue has become an end into itself, rather than a means to an end — which should be forging a national consensus on the future of the country. Without the buy-in of a solid majority of Southerners, the dialogue’s achievements could easily dissipate. Capitalizing on the potential gains will require the government to move quickly in implementing the demands of the Southern Working Group — reinstating former military personnel, providing pensions, compensating southerners for confiscated land and other assets — in order to instill some degree of confidence in the current government and political process. President Abed Rabbo Mansour Hadi, to his credit, has started some of these processes, but implementation will need to be far more robust and far-reaching if it is to have the desired outcome. Too much time has been wasted in getting these efforts off the ground, and as of yet, little has been delivered to win the hearts and minds of most Southerners. The Friends of Yemen should keep up the pressure and the assistance to help the Yemeni government deliver concrete changes.

The completion of the formal dialogue is just the beginning of what should be a multi-pronged effort to translate its conclusions and solutions to the rest of the country. This is where the international community needs to remain engaged and provide continued financial support to launch a countrywide discussion about what the working groups have proposed and agreed upon. Outside the “Republic of the Movenpick,” where the National Dialogue has been taking place, few Yemenis outside the capital know much about what has been happening and why it is relevant to them.

While important, the political process that has consumed the attention of the cabinet, the government, and the political elite in Sanaa has done very little to improve the daily conditions of average Yemenis in a country where nearly 50 percent of the population is food insecure and unemployment exceeds 40 percent among youth. The most critical challenge facing Yemen is how to stimulate economic development and growth in order to create new job opportunities and improve the quality of life for millions of Yemenis still struggling to make ends meet. The United Nations made an emergency appeal for additional humanitarian aid — even if donors pony up additional resources, this is only a stop-gap mechanism that will not address the longer-term economic needs of the population.

The Friends of Yemen platform is meant to be an opportunity for the government of Yemen to hold donors accountable for pledged money and for donors to hold the Yemenis accountable for promised reforms. During the meeting in New York on Wednesday, the Yemeni government will present three papers detailing progress on the political process, the economic situation, and military restructuring. The economic paper will note the degree to which pledges from past donors conferences have been fulfilled, as well as the progress on economic reforms in Yemen. Of the nearly $8 billion pledged by international donors, only $1.8 billion has been transferred thus far, and $1 billion of that was a one-time deposit by Saudi Arabia in the Central Bank. Gulf countries that have not fulfilled their commitments should do so, but the Yemeni government also needs to take responsibility for its end of the bargain as well — the delay in setting up the Executive Bureau to expedite and centralize project implementation, the internal turf wars between various ministries, and the lack of political will to undertake necessary fiscal and structural reforms. Perhaps understandably, the Yemeni government has been consumed with day-to-day operations and the National Dialogue, but it has neglected to move forward on implementing an economic policy that the country desperately needs.

International donors like to focus on output-oriented processes, such as constitution-drafting and elections preparation; these are important endeavors, and ones in which international assistance is often needed and welcomed. Yet, they should be wary of placing all attention and resources on Sanaa-centered initiatives. Despite the incessant political maneuvering, the government should aggressively address the challenges that plague the daily existence of most Yemenis — lack of access to food, water, electricity, fuel, and health services. Without making progress on the economic front a priority, Yemen’s democratic transition process risks derailment and its leadership a complete loss of credibility, which could result in renewed conflict across several fault lines. For too long, making tough economic decisions has been postponed because of political uncertainty, but the status quo can no longer continue if the country is to emerge from its perpetual, near-failed-state status.

Danya Greenfield is the deputy director of the Rafik Hariri Center for the Middle East at the Atlantic Council.
This article was originally published on Foreign Policy’s The Middle East Channel.