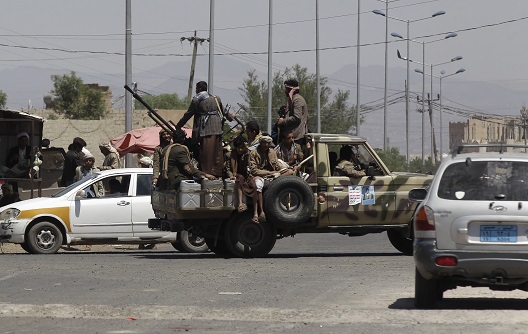 Shia Houthi rebels patrol a street in Sanaa September 23, 2014. Yemen's Shi'ite Houthi fighters tightened their grip on the capital Sanaa on Monday after seizing much of the city in a lightning advance and signing an overnight deal to win a share of power, capping a decade-long guerrilla uprising. (Photo: REUTERS/Khaled Abdullah)

After a devastating week of violence claiming at least 300 lives, the Houthi movement and leadership of the major political parties signed a peace agreement on Sunday that could lead the country out of the current morass. The emphasis here is on the word could. The agreement calls for a new prime minister within three days, a new government within a month, and reinstatement of fuel subsidies, in exchange for a ceasefire and Houthi evacuation from Sana’a. Despite the signed piece of paper, there is no guarantee that the Houthis will actually implement their end of the bargain.  Sana’a waits with tension to see what comes next from the Zaydi Shia rebel group, a heavily armed militia based in the Saada province that has waged six wars against Yemeni forces over the past decade. The Houthis’ hour-long celebratory fireworks display in the capital Monday night, their continued occupation of government buildings, and subsequent intimidation of their political opponents did little to assure Yemenis that the Houthis will be satisfied with their gains.

President Abdrabbo Mansour Hadi announced a ceasefire on Sunday that seems to be holding, but it is far too early to breathe a sigh of relief that the latest round of unrest and violence in Sana’a is over. The Houthis signed the peace agreement, but refused to affirm the annex on security and military issues related to Sana’a, Amran, al-Jawf, and Marib where fierce fighting between Houthis and government forces (or government-aligned tribesmen) has persisted over the past several months. The annex reaffirms state control over all territory, commitment to develop a mechanism and timeline for the disarmament of all groups, withdrawal of armed groups originating outside Amran, and immediate cessation of hostilities in Sana’a, al-Jawf, and Marib. Without definitive agreement to abide by these core principles, President Hadi essentially gave the Houthis everything they wanted without getting anything concrete in return. Many Yemenis view this move as total capitulation to Houthi demands and fear that a new era of Houthi domination is just beginning.

With reports that Ansar Allah, the Houthi umbrella organization, set up multiple checkpoints inside Sana’a and took over the headquarters of the army’s First Armored Division, there is ample reason to worry about their political and territorial ambitions. The agreement states clearly that once a new government is formed, the Houthis should remove all protest camps and checkpoints in Sana’a. But a lot can happen in that time and the Houthis may be inclined to dig in their heels. Backed into a corner, President Hadi presumably determined he had no alternative if he wanted to avert a civil war. Still, many Yemenis see President Hadi weakened because he caved to the Houthis, and restoring any kind of credibility will be an uphill battle, even with a new prime minister in place.

The National Dialogue Conference (concluded in February 2014) gave other political actors—including women, youth, Houthis, and the Southern separatist Herak movement—an opportunity to help shape the country’s political, security and economic future. It transformed the Houthis’ image from an anti-government rebel force to a legitimate political actor. In some ways, they emerged with the greatest gains from the process, but still felt unhappy with Dialogue’s outcomes regarding borders for the new six-state federal system and their access to political power in any formal institutions. Houthis remained excluded in the 2012 power-sharing transitional government, they hold no ministerial posts, and the country has yet to hold new elections, leaving them unrepresented in parliament.

Enter the Houthi protest camps in Sana’a and the opportunistic decision to seize upon fuel price increases to build public pressure on Hadi and press for a new government in which they would play a role. The transitional government was already deeply unpopular and viewed as corrupt, unqualified in some cases, and ineffective; for months many Yemenis had been calling for a new prime minister and a government based on competency rather than political affiliation. If the Houthi-led protests bring this to fruition, that would benefit everyone in Yemen. But the agreement catapults the Houthi movement into unprecedented political power, alongside the peaceful arm of the Southern Herak movement, which has thus far played a peripheral role. After Hadi selects a new prime minister, he will appoint a political advisor from both the Houthi movement and the Southern Herak movement who will “develop criteria for candidates in the new government” and will “make recommendations regarding the allocation of cabinet seats.” The president and prime minister will consult with representatives of each constituency to discuss any objections regarding the recommended candidates. It is unclear how many other political advisors there might be, but this could mean that the Houthi and Herak advisors have a significant veto over potential candidates. At best, Yemen ends up with qualified technocrats that everyone can agree upon; at worst, Yemen fills its government with weak figures controlled by their political sponsors behind the scenes.

Most Yemenis will focus on the terms of reconciliation regarding security in Sana’a and the new political authorities for the Houthi movement, but the peace agreement includes a number of other items that—if actually implemented—would greatly improve life for millions of Yemenis suffering from lack of economic opportunity, corruption, and poor governance. In addition to the appointment of qualified ministers not based on party affiliation, the agreement mentions the creation of an Economic Committee—drawn from experts and economists inside and outside of government—whose recommendations would be binding upon the government. The agreement stipulates that the Economic Committee will be formed within one week after the formation of the government and will assume the mandate to:

While this point seems a more aspirational, rather than achievable, description of the Committee’s mandate, it would at least provide a focal point for economic policy and provide momentum for decision-making—a tremendous step forward.

The agreement also stipulates that the new government will increase the Social Welfare Fund payments by 50 percent and deliver the payments to the beneficiaries immediately, increase the wages of civil servants, and expedite the process for eliminating ghost workers and double dippers by making all payments through bank or post office transfers. If the government effectively implements these three items, it would mean real progress towards improving the quality of life for average Yemenis. Of course, anyone who has watched Yemen over the past several years will know enough to be skeptical, since politics and personalities always have a way of thwarting even the best intentions to translate plans on paper into practice.

The complicated web of tribal and religious politics, behind-the-scenes political plays from former president Saleh, and the aggressive posture of the Houthi movement outside of Sana’a in multiple provinces make it nearly impossible to predict how the situation will evolve on the ground. President Hadi has an extraordinarily difficult task ahead. What happens next will rest largely on Hadi’s ability to restore some restore some degree of confidence, whether the next prime minister can demonstrate real leadership, and the calculations of the Houthi leadership about whether they want to take the country down the path of prolonged violence. With the ongoing threat of al-Qaeda, manipulation from the Saleh family, a humanitarian crisis, and widespread poverty, the challenges seem overwhelming. Nonetheless, the country has pulled itself back from the brink before and will likely do so again.

Danya Greenfield is the deputy director of the Atlantic Council’s Rafik Hariri Center for the Middle East.