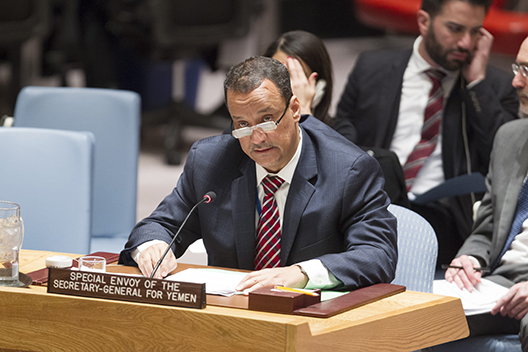 On May 11, Saudi Brigadier General Ahmed al-Asiri — the spokesman for the Saudi-led military coalition fighting the Houthis in Yemen for over a year — briefed reporters in Washington with a clear message: if the Houthis and supporters of former Yemeni President Ali Abdullah Saleh continue to insist on unreasonable demands at the negotiating table, Riyadh is prepared to storm Sanaa and win the war militarily.

“[T]oday we have troops around the capital, and we will get in, because the goal should be achieved, the goal which is securing  Yemen,” Asiri told reporters during his briefing.  “Securing Yemen doesn’t mean that we will tolerate to have a militia…threatening our border and threatening the area.”

The Yemeni peace talks facilitated by the UN Secretary General’s Special Envoy to the conflict have certainly proven as difficult and complicated as observers of Yemen expected.

The first month of talks in Kuwait can at best be described as a roller-coaster. Both delegations are dug into their political positions, as factions on the ground continue to shoot at one another despite an April 11 ceasefire agreement that was designed to cool tensions and ease the negotiating process.  Indeed, after first being delayed for several days over Houthi complaints about ceasefire violations, the Yemeni government delegation walked away from direct talks on May 1 in protest of Houthi fighters storming a military base north of Sanaa.

Yet despite challenges to the process, UN Special Envoy Ismail Ould Cheikh Ahmed has managed to keep the discussions alive by keeping expectations low and consistently reminding the media that a war that has lasted for over a year will not be resolved in a couple of weeks.  In his opening statement to the press announcing the negotiations, Cheikh Ahmed was realistic about what could be accomplished: “the path to peace may be difficult,” he said, “but I believe that it is clearly in reach if all parties engage in good faith.”   Due to each side’s refusal to compromise on their core political positions (what a political transition should look like and the mechanisms by which the Houthis will hand over their arms), Cheikh Ahmed has rightly chosen to focus on those aspects of the talks that hold tangible benefits for both sides.  The fact that Cheikh Ahmed has established separate working groups for specific issues simultaneously rather than focusing on each issue sequentially is a testament to how fragile the Yemeni peace talks are.

If one judges the success of the UN-mediated talks in terms of the main issues — how a transitional Yemeni administration will operate, when the Houthis will withdraw from the territory they have captured, and how UN Security Council Resolution 2216 will be implemented — then there is no question that the United Nations is struggling.  The Houthis are refusing to disarm, hand over their weapons, and withdraw from Sanaa until a fair, transitional unity government is operating from the capital to oversee demobilization.  The Yemeni government, in turn, remains opposed to any formulation that would suggest that President Abd Rabbu Mansour Hadi is not the legitimate head-of-state.  In practice, this has translated into a demand that the Houthis surrender their leverage before any political reform occurs.  Unless and until these two wildly divergent views are bridged, there is little reason to believe that the United Nations will be anymore successful today than they were during the two previous rounds of talks in June and December of last year.

To call the Yemen peace talks in Kuwait a slow-walking failure, however, would be a gross mischaracterization.

Unlike the two previous efforts at peacemaking, Cheikh Ahmed has been able to direct a process that has survived several ceasefire violations, a delay in the opening round, and several walkouts by the government delegation — including one that was caused by a Houthi representative’s use of foul language.  Keeping the discussions alive is not a minor development; an armed conflict that has lasted over a year has generated a sentiment among the warring parties that can only be described as acrimonious, if not induced by hatred.  And yet the working groups continue to do their work and all delegations have come to an agreement to seriously consider a proposal that would result in a major mutual prisoner exchange.  In addition, the ability of Saudi Arabia and the Houthis to arrive at a de-escalation agreement along the border has not only decreased the violence when compared to earlier in the year, but has also encouraged senior Saudi officials to openly acknowledge that the Houthis are a part of Yemen’s political and social fabric.  The parties have come a long way from the dark days of June 2015, when the Houthi delegation refused to meet with Hadi’s representatives and peace talks collapsed in less than a week.

Whether or not the Yemeni peace process survives will depend not only on the warring parties themselves, but on the UN Security Council, which has been unified on the need to resolve the war through a constructive dialogue.  It will be up to the Security Council to respond in the event that the talks break down, including through the possibility of a full arms embargo, individual sanctions and travel bans on spoilers of the diplomatic process, and an authorization of an Independent International Commission of Inquiry to investigate any and all allegations of war crimes and crimes against humanity by all sides in the conflict.

As of May 16, the peace process remains deadlocked on the very critical political issues that will determine whether or not the bloodshed will stop and the conflict will be resolved.  If the talks are to succeed, all parties involved need to replace their zero-sum view of the conflict in favor of a political transition process that is good-enough for everyone to accept.  For the Houthis and Ali Abdullah Saleh, this includes a realization that taking Yemen’s major cities by force will not be the deciding factor in how Yemen is governed.  And for President Hadi and the Saudis, this means coming around to the reality that Yemen will be not be administered as it was before the war began.