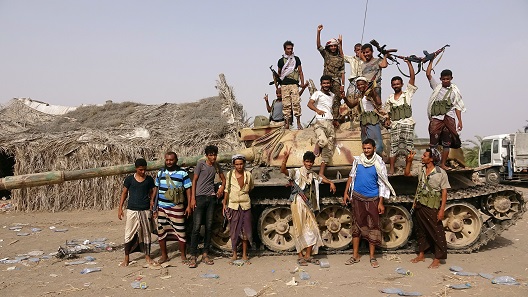 There are three possible outcomes to the ongoing battle for Hodeida. First, the Saudi-led coalition succeeds in ousting the Houthi fighters from airport, seaport, and city. Second, the Houthi forces succeed in thwarting the land assault, but remain surrounded from the south and the east. Third, both sides accept a UN sponsored compromise, placing airport and seaport under an international force to keep the flow of humanitarian assistance going and provide a lifeline to civilians across the country. In all three options, the war continues grinding agonizingly on, though obviously the compromise option would not only provide relief to the civilian population of Hodeida, but also serve as a possible stepping stone to a broader peace agreement in the war-torn country.

The strategic balance in Yemen has not changed very much since the Houthis were pushed back from Aden and most of the south during the first year of the war; precipitated by the Houthi takeover of Sanaa in 2014 that broadened into a regional conflict by a Saudi-led coalition in 2015. The change since former President Ali Abdullah Saleh was killed by the Houthis has also not been significant. The loss of Hodeida by the Houthis could make a strategic difference, but it would not necessarily end the war. A peace agreement, though still a difficult proposition, remains possible and in fact the inevitable conclusion to this inhumane war.

The war across the Yemen-Saudi border in the northern front is meant to achieve tactical, not strategic goals. The Houthis cannot hope to take and retain significant portions of the Saudi south, nor has this ever been a long term goal for them. Applying pressure on the Saudis to stop their aerial bombardment and pull back their artillery from the border had been viable tactical objectives first employed by the Houthis in the 2009-2010 round of fighting between them and the central government; when the Saudi air force stepped in on the side of Saleh. The Houthi fighters then swept across the border and seized nearby towns. They also seized about one hundred Saudi soldiers and border guards along with them. An agreement ensued the result of which was a cessation of Saudi bombardment, the return of the Saudi soldiers, and an agreement with the central government to end the six-year war.

The reverse is also true. Saudi Arabia does not have a ground force it could use to invade and occupy the Saadah region—home base of the Houthis—with its most powerful friends in the region (Egypt, Morocco, and Jordan) having refused to provide the troops for such a force.

Again, seizing Yemeni land has never been a goal for the Saudis, at least not since the last border agreement with Sanaa settled an ancient border dispute between the two countries in 2000. The original Saudi goal when the 2015 war started, was to build a coalition of the willing that would supply the ground force necessary to defeat the Houthis. Not many were willing. The Houthis stubbornly defended their mountainous terrain for six years against a better trained and equipped central government force. Saudi support for Sanaa and its aerial intervention during the last year of that war, made no strategic difference in the balance of power inside Yemen.

On the southern front, the situation is somewhat reversed, but also ultimately stalemated. The Houthis were never strong enough to take over all of Yemen. They made a strategic blunder by going into Sanaa and ousting the elected president Abed Rabbo Mansour Hadi in 2014. They would have been (and most likely were) better advised to put pressure on Sanaa for political gain rather than taking over the capital and setting up an alternate government. They made an even bigger blunder by pushing their assault southwards and trying to takeover Aden, the capital of the south and home to a vehemently anti-north movement called the Hirak. By moving towards the seaports close to the strategic Bab el-Mandeb waterway they also inevitably rang alarm bells in Riyadh and Washington—the regional and international intervention that followed was inevitable.

Currently, the defending and attacking forces in and around Hodeida are roughly equal in number though the attacking force has the edge in armor; not to mention sea and air support. Any direct US assistance, whether above board or surreptitious, could tip the balance in favor of the coalition—but it would have to be decisive in nature in order to do so. Overall and country-wide, ground forces are again more or less equal, with the Houthis having the advantage there because of unity of command and strong motivation.

The Saudi-led coalition can sink itself into a long term quagmire by pursuing total victory, however defined, even if they succeeded in winning the battle for Hodeida. Yemen’s second largest port and fourth largest populated city, sits at the bottom of a slope that inclines gradually upwards and goes through the mountainous region of Hajara and surrounding peaks and valleys before it reaches the plateau of Sanaa. Aerial bombardment would have to totally destroy Sanaa, decimating civilian along with military personnel in order to be able to send coalition forces into the city—and even then, this would leave the Houthis holed up in their mountainous hideouts further north.

The invasion of the south by an ideologically alien northern force was never a viable strategic option and can no longer be rationally pursued at this point. Surely the Houthis realize that by now and are looking for a face-saving, interest preserving way out of the debacle they got themselves into. The Saudi-led war, already bleeding the Kingdom’s foreign reserves and costing an average of $3-5 billion dollars per month for the past three years.

Not to mention the deteriorating image of Saudi Arabia and the mounting pressure on it from the internal community and mounting criticism even within the US Congress. As such, this war cannot rationally be pursued to an ultimate military victory. A more logical choice would be to cut losses and engage in an all-out diplomatic push—creatively presenting options and long-term solutions and recruiting the entire UN security council for that effort.

This has been said before but it’s worth repeating: a compromise on Hodeida could and should be used as a stepping stone towards a comprehensive peace—one that demilitarizes all militias, changes the current government into a genuine coalition cabinet that takes on all regional grievances, north and south, and plans yet again for another national election after a transitional two-year period during which Yemen’s civil society is given free rein to help re-educate voters. In the meantime, development agencies should be provided the security to begin the uphill task of tending to the serious task of humanitarian relief and the long-term challenges of economic development.