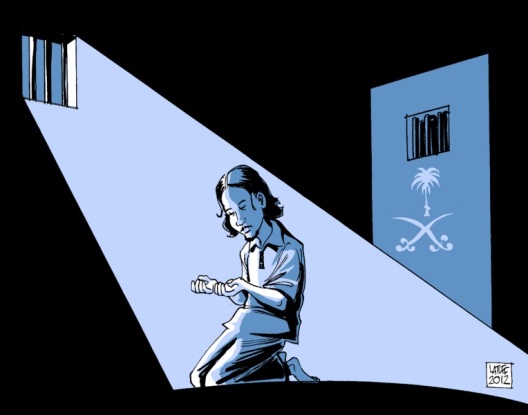 The emergence of social networking has opened novel means of communication and connection worldwide. But perhaps nowhere were these new vistas more welcomed than in Saudi Arabia. The virtual communities of Facebook and Twitter offer a means to circumvent the gender confines and sociopolitical restrictions of the Kingdom’s highly segmented and controlled public life. And they are popular. Over 90 percent of the Saudi population between 18 and 24 years of age use the internet. In addition Saudi Arabia is the fastest growing market for YouTube and boasts the highest percentage of Twitter use by its online population in the entire world.

Saudis use these new platforms, particularly Twitter, to expand the scope for acceptable political discourse. Public discussions of rising prices, insufficient income, and the plight of detainees attract avid commentary. Charges of corruption are leveled, and sometimes garner a response from the government. New intellectual communities are formed as users discover like-minded peers across the Kingdom and the broader Gulf. There is no question that Twitter has provided a platform for more variegated interactions and a more sharply critical public.

Surprisingly the Saudi government has been slow to react to this change. Government officials, among them the Head of the Saudi Religious Police, have warned of the dangers of Twitter, but the state has not launched the more focused legal campaigns to punish Twitter-based criticism of rulers witnessed in Kuwait, Bahrain, and the UAE. That day may be coming as evidenced by the antiterrorism draft law just passed by the Saudi cabinet which criminalizes acts that “disturb public order, defame the reputation of the state or threaten the kingdom’s unity.” But thus far state action has targeted those taking the next step: acting on their political beliefs by challenging authority, politically organizing, or even just assembling a discussion group.

This is particularly true for Saudi youth, who have come under intense scrutiny since the start of the Arab Spring. In fact, one could argue that the Arab Spring cut short a nascent renaissance of independent youth activism in the Kingdom that preceded the revolutions in Tunisia and Egypt. One initiative after another has fallen prey to denunciation by religious authorities and to closure by the state. The outcome has been a flood of new limitations on public assembly in a country already bereft of open society. As young Riyadh intellectual and activist Badr al-Ibrahim observes, “Reformers tried to use the Arab Spring to pressure the government. Instead the government used the Arab Spring to pressure them.”

Social and political reformers in Saudi Arabia operate within a vacuum of civic support and legal structure. There is no written penal code. There is no law regulating assembly. There are many ways in which activists can run afoul of the government, but it is hard to know exactly what those red lines are. In an interview at his home in Jeddah in 2012, the prominent Saudi cleric Salman al-Awda voiced his frustration with this state of affairs, claiming that he had been denied his television platform and the ability to travel on the basis that “he has stepped into matters that are not his business.” Exactly what these matters were was not clear to him. No specific charges were ever filed.

A new report by Human Rights Watch details the toll the legal ambiguity and security measures have taken on Saudi Arabia’s fledgling human rights community. Almost all face charges of “breaking allegiance with the ruler” or “running an unlicensed organization.” And most—with the notable exception of the founders of the influential Saudi Civil and Political Rights Association (ACPRA)—are tried in specialized courts meant for terrorism cases. Many have been held in detention or have received long prison sentences.

One example is the Jeddah lawyer, Waleed Aboul Khair, who stands out among Saudi’s next generation activists for his legal representation of reformers and jihadists and for his outspoken advocacy for political rights, including women’s rights. After receiving a sentence of only three months for his rights activism from a sympathetic judge in the Jeddah Criminal Court in October, he was arrested again for holding an unlicensed discussion forum in his home. He now must stand before the Specialized Criminal Court, and faces numerous charges which could garner a lengthy imprisonment. Especially telling are the taunts he received from his interrogators: “You think you can meet outside of Twitter? You can’t. We own this space.”

Given the social and political difficulties of gathering inside Saudi Arabia, one group of young reformers decided to meet outside the Kingdom. The Youth Rising Forum (multaqa an-Nahda) was organized by young men working at King Fahd University in the Eastern Province, many of them from an Islamist background. They shared an interest in building a community of young Saudis and other Gulfis, interested in change and independent from the informal Islamic political societies which dominate the social sphere in Saudi Arabia. They used Twitter and Facebook to assemble a group of 100 youth—both men and women—and held their first meeting in 2010 in Bahrain.

Their second meeting was held successfully in 2011 in Qatar in the heady days immediately following the overthrow of the Ben Ali and Mubarak regimes. Yet just a year later in May 2012 as they gathered for their annual meeting, this time in Kuwait, the political climate across the Gulf had changed. They had become more bold, moving beyond their Islamist base and inviting a woman and a Shia intellectual to address the forum under the provocative (for Wahhabi Islam) theme of Civil Society. But suspicion of any youth gathering was running high among both Gulf governments and entrenched Islamic movements. The attack came from Kuwaiti Salafis and spread among Salafi networks in Saudi Arabia who accused them of being both anti-Islam and anti-Saudi state. Apparently wary of a political crisis and fearful of angering their important neighbor, the Kuwaiti government pressured the hotel to withdrawal the groups’ reservation. The conference continued with the support of Kuwaiti liberal groups, but without the Saudi participants.

Only a month later the Saudi ministry of commerce and industry issued a directive warning the private sector against participating in such youth gatherings abroad, presumably through funding. The directive spoke cryptically of the foreign “targeting of youth in particular, for suspicious goals and to influence them.”

Al-Jusoor: A place to call home

While some youthful reformers used Twitter as a means of forming associations, in one notorious case a means of forming youthful association was eliminated over a few scandalous tweets. Hamza Kashgari was a young poet and columnist when in he penned via Twitter a short reflection on his relationship to the prophet Mohammed. The tweets were deemed blasphemous and ignited a public firestorm fueled by state-affiliated ulema and Islamists that forced Kashgari’s flight from the country, and eventual arrest, repatriation, and imprisonment for nearly two years.

The campaign did not end with Kashgari’s arrest, however. It engulfed as well al-Jusoor (Bridges), a small bookstore and café which had become a sort of seedbed for Jeddah’s emerging youth culture. The café served as an open space to read, discuss, listen to music, view film. Its rooms could be rented by groups to hold study sessions, plan volunteer activities. As one regular put it, “It was a normal life, a social life like you live in any city. Only we don’t live it.”

While the vilification and arrest of Kashgari shocked Jeddah’s activist community, the closure of al-Jusoor, only a little over a month after the crackdown of the Youth Rising Forum, left them adrift. The state patrolling of them did not cease as religious police pursued their mixed study groups in restaurants, driving many back into their homes. Reports emerged that the ministry of commerce in Jeddah had issued a circular to restaurant owners asking them to break up study groups of young men.

The new generation waits… and tweets

There are indicators that activist youth culture in the Kingdom and across the Gulf is changing: more critical of authority, more independent-minded, and definitely more connected. Still while new political ideas may be seeded online, the Saudi government seems determined to uproot any new social organization before it has the chance to bear political fruit. Discouraged by the government pressure as well as by the success of established Islamic movements in mobilizing public sentiment against them, many activist youth are turning more reflective. “A lot of intellectual work remains to be done,” one activist in the East noted. “The idea of immigrating is very compelling. I always keep it in the back of my mind.”

Kristin Smith Diwan is an Assistant Professor of Middle East Politics in the School of International Service at American University and a visiting fellow with the Rafik Hariri Center for the Middle East.

Image: A Carlos Latuff depiction of Hamza Kashgari, a young Saudi poet and columnist imprisoned for his Tweets on his relationship to the prophet Mohammed. (Photo: Wikimedia)