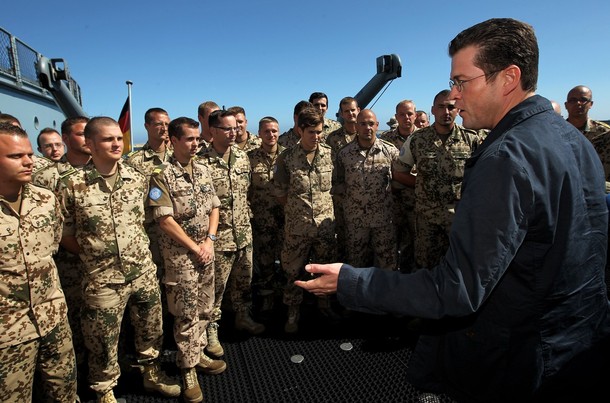 From Judy Dempsey, New York Times:  On Friday, the German defense minister, Karl-Theodor zu Guttenberg, is set to present to Chancellor Angela Merkel his plans to modernize the Bundeswehr, the country’s armed forces. From all accounts, it could be one of the most radical and long overdue shake-ups undertaken in decades by a defense minister.

The Bundeswehr’s leadership structure, which has changed little since the Cold War, will be streamlined. The armed forces, which number 250,000, will be cut by well over 60,000. Many of the 406 barracks and military buildings will be closed. And if Mr. Guttenberg has his way, conscription will be replaced by voluntary service. …

Two things have spurred Mr. Guttenberg. One is the war in Afghanistan, where Germany, the third largest contributor of troops after the United States and Britain, has more than 5,200 soldiers, based mainly in the north. The second is Finance Minister Wolfgang Schäuble’s decision to find savings of more than €80 billion, or $102 billion, between 2011 and 2014 to reduce the budget deficit. That will hit the Defense Ministry hard, and Mr. Guttenberg will have to find potential savings of as much as €8 billion over those four years. …

If Mr. Guttenberg succeeds in pushing through his changes, they will take several years to implement. The abolition of conscription could be the easiest. Besides saving billions of euros, it would be a catalyst for change. The Bundeswehr will have to offer its soldiers more money and more career prospects, opening the way to a more modern, flexible and educated army.

But Mr. Guttenberg has other big questions to answer. He has to explain to the public why Germany needs such a modern army. “Support by the public and parliamentarians for missions is at its lowest in a decade,” Mr. [Winfried] Nachtwei of the Greens said.

And if Germany does end up with an army that is more fit and more flexible, then it is likely that “expectations by NATO allies will increase” and Germany will be asked to contribute more to missions, [Lt. Col. Detlef] Buch said. But the German public may have other ideas.  (photo: Getty)