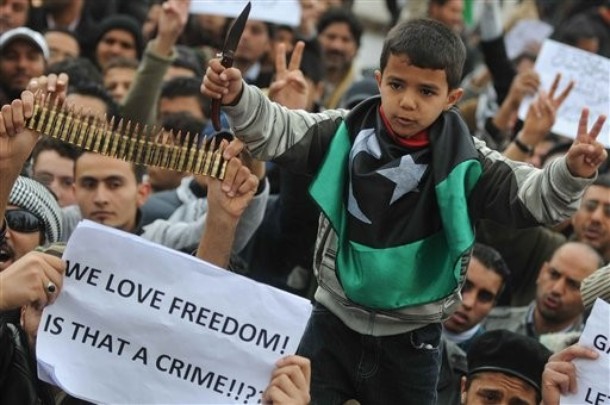 From  Zalmay Khalilzad, the Washington Post:  President Obama has reportedly settled on a country-specific strategy for the Middle East uprisings. Instead of crafting a regional plan, the United States will deal with protests for democracy and freedom in each state on its own terms. This approach is inadequate to both the challenges and the opportunities arising from the political turbulence. …

First, it discounts the link between U.S. policy in one situation and outcomes elsewhere. Just as protests beginning in Tunisia inspired revolts across the Middle East, so too will the American approach to each uprising have ramifications in other countries.

Second, the strategy is inherently reactive. It allows us to manage breaking developments but undermines our ability to shape events proactively even as regimes and reformers are watching our actions and drawing lessons. If we are to avoid instability while putting hostile regimes on the defensive, we need a strategy that allows us to take the initiative.

The United States should adopt a proactive regional strategy that differentiates among transitional states, friendly authoritarians and anti-American dictatorships. In Iraq, Tunisia and Egypt, the United States should steer the transitions underway toward full democratic consolidation. In Iraq, we need to assist in the implementation of the recent power-sharing agreement and prod the government to deal with corruption and improve services. In Egypt and Tunisia, we can increase the odds of stable democracies emerging by leveling the playing field between moderate, secular democrats and their Islamist and sectarian opponents. We can do so by making sure good election laws are put in place and by providing liberal parties and civil society groups with assistance to counter the aid that Iranian and others provide to Islamist parties.

In friendly but repressive states, the United States should push ruling regimes to open space for responsible actors and oversee political reforms. We should encourage the regimes in Morocco and the Persian Gulf to evolve into constitutional monarchies while pressuring leaders in Algeria and Yemen to strengthen their parliaments, engage the opposition, and implement and abide by constitutional limits. Without such transitions, these countries risk increased instability.

The Middle East uprisings that hold the greatest promise are in anti-American dictatorships. The immediate challenge is to ensure the ouster of Libyan leader Moammar Gaddafi. Steps to help that happen include the establishment of a no-fly zone; support and assistance for the authorities in liberated areas, humanitarian and military aid for friendly rebels; and outreach to elements inside the Gaddafi coalition, including tribes. The Arab League’s call for a no-fly zone should bolster U.N. Security Council support for tougher action. By moving quickly on all these fronts, the United States and its allies can begin to reach an understanding with Libyans opposed to Gaddafi.

The writer, a counselor at the Center for Strategic and International Studies, was U.S. ambassador to Afghanistan, Iraq and the United Nations during the George W. Bush administration.  (photo: AP)