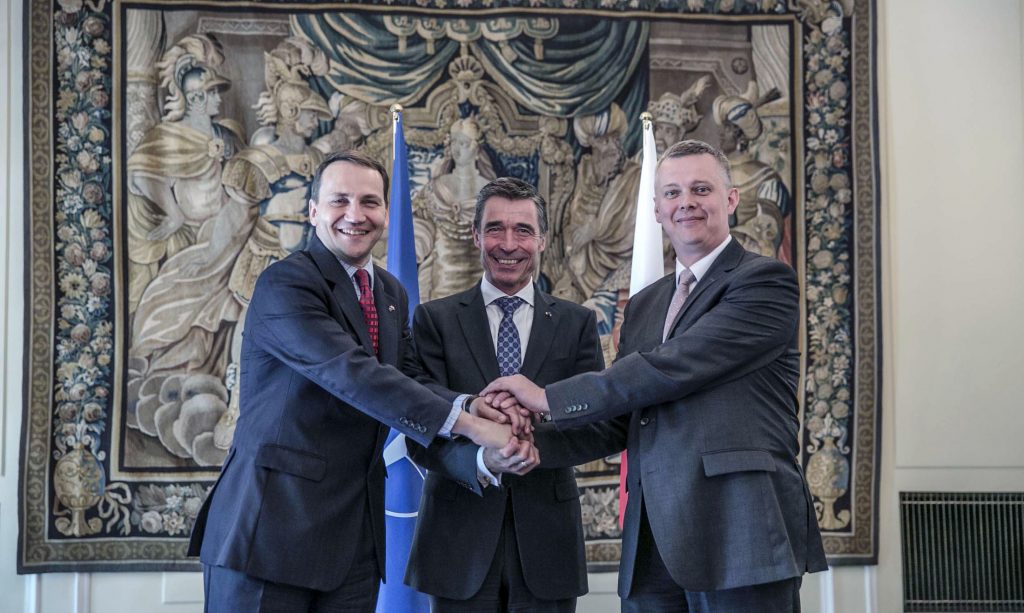 From Anders Fogh Rasmussen, NATO:  In my view, the biggest dangers to our security are not cyber-warfare, terrorism, or proliferation. These are challenges. But they are not obstacles. I would say the real obstacles are Europe’s own limited ambitions in today’s world.

I believe that Europe must raise its sights. It should have the confidence, the conviction, and the capabilities to play its full part in shaping the 21st century. And Poland can help show the way. . . .

[D]ifficulties are forcing many NATO Allies to reduce their investments in defence. But lower defence budgets and fewer military capabilities could translate into less influence for Europe. And instead of being a significant actor on the global stage, Europe risks becoming a simple spectator.

So we are now at a historic turning point. And we have to be clear about what we want. Do we want to act? Or do we want to watch?

In the past, better security led to better economic growth. With NATO focusing on hard security, the European Union was able to focus on economic growth and deeper political integration. In sum, a stronger NATO meant a stronger Europe. And this remains true today.

The emphasis, however, has changed. Now, a strong Europe is necessary to sustain a strong NATO.

By increasing investments in defence, and by increasing the availability of key military capabilities, Europeans will be able to act more effectively – nationally, within the European Union, and within NATO. Defence investments will yield more global influence. They will deliver more security for our peoples. And they will help us to advance a global agenda in line with our values.

Quite simply, a European Council that does not make a commitment to invest in hard military capabilities will be nothing but ‘hot air’. And it won’t bring us any closer to the strong and capable Europe we need.

As we prepare for that European Council, it is vital we all keep in mind three key points.

First, soft power alone is not enough. If we want to have credibility and exert influence, then hard capabilities are essential to back up our diplomacy. We have seen this in the Western Balkans, where restoring stability has required a mix of hard and soft power. The European Union brokered the recent agreement between Pristina and Belgrade. But NATO provided the security assurances both parties needed before they agreed to implement it.

Second, if European defence budgets continue to decline, many of our nations will no longer be able to help manage crises – whether through NATO, the European Union, or the United Nations. So we must stop the cuts. Hold the line on defence spending. And reinvest in security as our economies recover.

Our main challenge is not just about what we spend. It is also about how we spend. Too much funding goes on salaries and static equipment, instead of research and deployable capabilities. And many Allies spend scarce sums on capabilities we already have, or no longer need. Here in Europe, our nations should do more to coordinate their spending and their programmes, so we can develop forces that are more coherent, more modern, and more effective.

We must also do much more multinationally, instead of nationally. I understand the political concerns that inhibit the creation of a more transparent and open European defence market. But we must remember that today a purely national defence is a pure illusion. Many of the critical defence capabilities we need are just too expensive for any individual country to deliver alone.

Finally, having the right capabilities is important, but it’s not enough. We must also have the political will to use them.

We must be prepared to deal with security challenges on Europe’s doorstep. To help manage crises farther afield that might affect us here at home. And to better share the security burden with our North American Allies.

For this to happen, European nations must not remain distracted by their economic woes. Instead, we must develop a truly global perspective. We must stand united, not divided. We must look outwards, not inwards. And Europe and North America must hold more open, and frank discussions on the global issues that concern all of us. Within NATO. And between NATO and the European Union.

Hard power. Defence Investment. Political will. And a stronger Europe. This is the path towards a more secure European future.