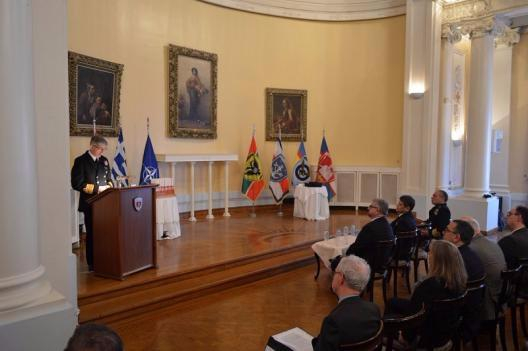 As a sailor, I have a particular interest in the battle of Salamis. It stands as the classic example of a small, allied but unified force acting boldly to defeat a much larger, clumsy and disorganized opponent. Indeed with the need to protect civilian populations Salamis has echoes of the complexity of hybrid war that we face today

It is a powerful lesson and one that influences our efforts to foster an interoperable, unified and proactive Allied naval force.

Of course, much has changed since the time of Themistocles and his Triremes. But actually, much has changed even in the last few years. I believe this to be a pivotal time for European and for transatlantic security.  So much has changed so quickly in maritime NATO that just about anything written about us more than 3 years ago is out of date.

No one would have predicted in 2014 that NATO warships would be operating in the inner leads of Lesbos and Chios to help stop illegal migrant trafficking; or that we would have regular engagement with EU security actors like FRONTEX and Operation Sofia.

Or that we would be facing Russian area denial networks in several seas, along with the return of the Russian Navy as a blue water force promoting Russian objectives in Syria and Libya. Few would have predicted that MARCOM would become the coordinating hub for Alliance-wide surveillance of Russian naval activity, – and with a growing demand for a more powerful voice – a Joint Force ‘Maritime’ commander as it is sometimes put to me….

The biggest challenge we may face today is the battle for the home front, for our society. We military officers must recognize that the biggest battle might be for the hearts and minds of our own people. Challenged as they are by their uncertainty; a loss of hope and endless financial challenges. If our society looses cohesion and unity we offer fertile ground to our enemies….

We know that speed is of the essence in a crisis. The Standing Naval Forces in our inventory are NATOs first responders with a notice to move usually of hours, and never more than a day or two. The time it takes the Standing Forces to arrive at a crisis scene is often shorter than it takes other assets to depart from their base locations.

I currently command 11 Frigates or destroyers, 3 corvettes and 9 mine countermeasures vessels.

They are currently deployed, fully certified and ready. A single navy fielding a sustainable deployed force of that size would need 40 surface combatants and 27 MCM vessels in its inventory.

That is larger than any navy in NATO other than the US.