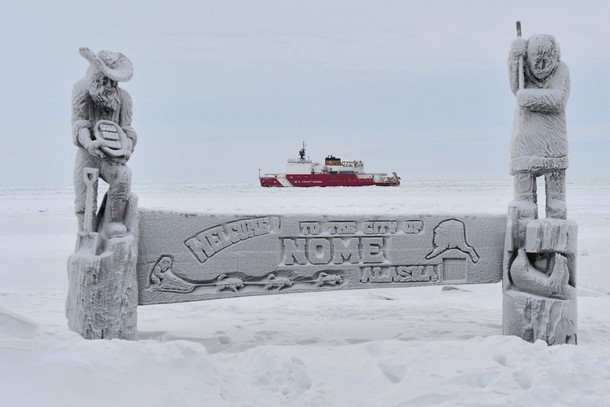 From Reuters:  If, as many scientists predict, currently inaccessible sea lanes across the top of the world become navigable in the coming decades, they could redraw global trading routes — and perhaps geopolitics — forever.

This summer will see more human activity in the Arctic than ever before, with oil giant Shell engaged in major exploration and an expected further rise in fishing, tourism and regional shipping. But that, experts warn, brings with it a rising risk of environmental disaster not to mention criminal activity from illegal fishing to smuggling and terrorism.

"By bringing more human activity into the Arctic you bring both the good and the bad," Lt Gen Walter Semianiw, head of Canada Command and one of Ottawa’s most senior military officers responsible for the Arctic, told an event at Washington DC think tank the Centre For Strategic and International Studies last week. "You will see the change whether you wish to or not."

With indigenous populations, researchers and military forces reporting the ice receding faster than many had expected, some estimates suggest the polar ice cap might disappear completely during the summer season as soon as 2040, perhaps much earlier.

That could slash the journey time from Europe to Chinese and Japanese ports by well over a week, possibly taking traffic from the southern Suez Canal route. But with many of those key sea routes passing through already disputed waters believed to contain much of the world’s untapped energy reserves, some already fear a rising risk of confrontation. . . .

Norway and Canada, for example, have spent recent years quietly re-equipping its military and moving troops and other forces to new or enlarged bases further north.

Having largely withdrawn most of its forces from the region in the aftermath of the Cold War, officials and experts say the United States is now only just rediscovering its significance.

But for now, Washington has no concrete plans to build even a single new icebreaker — in part because experts estimate the pricetag for a single ship could be as high as $1 billion. . . .

Russia in particular is seen to be keen to assert its presence in a region in which it has long been the dominant power.

It operates almost all of the world’s 34 or so icebreakers — albeit many of them ageing Cold War-era vessels, some powered by nuclear reactors that Western experts say could be a major danger in their own right.

Perhaps just as importantly, its navy continues to view the Arctic as its backyard, vital not just for natural resources essential to maintaining Moscow’s economic clout but also the hiding ground for its ballistic missile-carrying nuclear submarine fleet.

But its greatest advantages may be simply demographic.

"They have cities in the Arctic, we only have villages," says Melissa Bert, U.S. Coast Guard captain and currently a military fellow at the Council on Foreign Relations in New York. "We simply need more of a presence there. . . ."

This year, Oslo announced it was creating a specialist "Arctic battalion", explicitly linked to a similar move by Russia’s military just across their shared border.  (photo: Reuters)